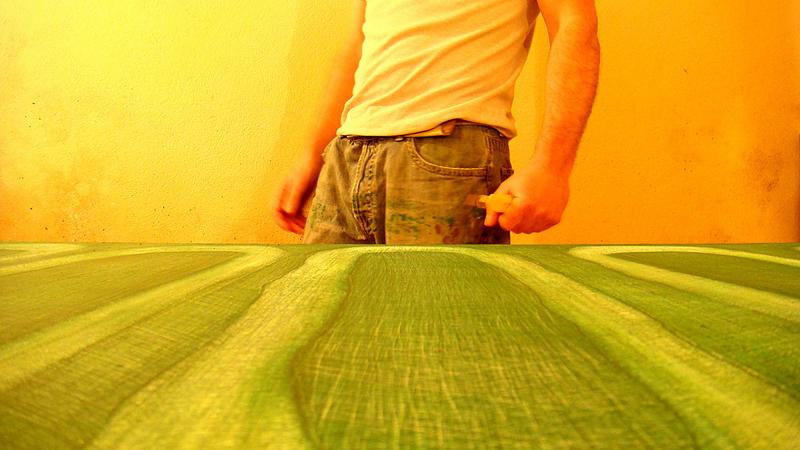 Artist Scratches Million Dollar Paintings12-17-2020 22:30 PM CET Paris, FranceAbstract artist John Lally has revealed 3 artworks that have taken 15 years to complete in his studio west of Paris. The Million series is a collection of works that were begun in 2005. Three painting scratched 1000000 times to reveal the figure of 1000000, with the price of 1000000 dollars.The paintings were crafted to convey our shared greed, value, selfishness and worth. Painted in mono colour scapes that are both simplistic and complex depending on your view of the paintings. The artworks challenge us with its crudeness and poorly defined figures, there has been no effort to make this pretty on the eye.Lally who began painting in 1991 has said, to put value on a commodity without devaluing its worth, then translate this into a series of paintings without falling into a poor cliché, was the main challenge. Most of the other concepts related to the painting came along with the passing of time. While the artist has painted other works over the past 15 years, it was only this year that he finally started to display his art publicly.Born in 1965 to Irish/English parents Lally would spend his winters in the UK in Salisbury and summers in Ireland splitting his time between Cavan and Sligo. Since 1991, John Lally has been creating art that started out figurative, but since the end of the 1990s has been abstract, focused on scratching boards, paper and canvases is the vain hope of discovering something under the surface.The Million Series and other artworks by John Lally can be seen at https://www.crea8ted.com/the-million-series-by-john-lally/3 rue de la porte de Vicq, 78640, FRANCEFor more information contact info@crea8ted.com

03-23-2017 | Industry, Real Estate & Constr …
ReportBazzar
Home Retail Series: Window Dressings
Summary The UK window dressings market is forecast to slow to 1.4% growth in 2016, underperforming the homewares sector, due to weakening consumer confidence, a slower housing market in H2 and economic instability following the Brexit vote, with shoppers delaying larger ticket homewares purchases, such as curtains and shutters. Key Findings – “Dunelm is the dominant leader of the window dressings market, exploiting its specialist credentials to hold significant destination appeal in the
03-15-2017 | Health & Medicine
Maetrics
Maetrics launches Swiss seminar series
Maetrics, a global management consulting firm providing life sciences companies with deep quality, compliance, and regulatory solutions has launched a series of training seminars in Basel, Switzerland, as part of its new Seminars and Training Course offering for 2017. The new series of 4 training courses provides added service to client’s continental branches and further cements Maetrics’ position as a global partner. The Risk Management EN ISO14971 course will take place
02-06-2017 | Science & Education
Education Online Services
Test Series for Gate
As the market is not only based on talent any more but demands smart brains scoring stupendous. As just being a graduate from a simple or less renowned college does not make you stand in the market that demands highly educated and professional citizens people are switching themselves for higher education to reputed university and the entrance gate for reputed colleges are only through exams like GATE. People are spending
12-01-2011 | Business, Economy, Finances, B …
Scott LaPlant LLC
Cisco 7200 Series Routers
Nov 30, 2011- Cisco 7200 Series Routers are modular routers that support a multitude of performance, service and density needs. The 7200 router is the hardware industry’s most widely deployed universal services aggregation router for enterprise and service provider edge applications. History 7200 routers were first shipped several years ago, replacing the now defunct 7010, which had had its heyday in the 1990s. The first 7200 models were somewhat average in their
11-09-2010 | Arts & Culture
Voices.com
Voices.com Presents New Webinar Series
Voices.com is establishing a new webinar series called Makeover Mondays where the women from Voices.com will give live reviews of voice actor profiles, helping a different person each week to take their web presence, marketing and auditioning strategies to the next level. Makeover Mondays is a fresh approach on how to polish up voice talent profiles and help them sell their services online. Participants in Makeover Mondays will be randomly drawn
05-12-2009 | Sports
CueSport TV Ltd
£50,000 Pool Series Returns
The richest 8-ball pool tour on the UK and Irish calendars returns this weekend (8th-10th May) with event two of the 2008-09 CueSport TV £50,000 Pool Series. This time the event is being held in the amazing Louis Fitzgerald Hotel in Dublin, Ireland. As the pinnacle of the Blackball pool game, these tournaments each carry a guaranteed £10,000 in prize money with the winner of each leg receiving £3,500. Simon Ward
Comments about openPR
OpenPR is clearly structured and remains true to its principle of confining itself to the essential parts. OpenPR has proven to be a very good and reliable partner to our media agency: Within the shortest time the releases are online and go down well with the media representatives. The success of OpenPR is reflected in the steadily increasing number of press releases. It is good that OpenPR exists!
Ursula Koslik, Director Marketing & PR, F+W Hamburg