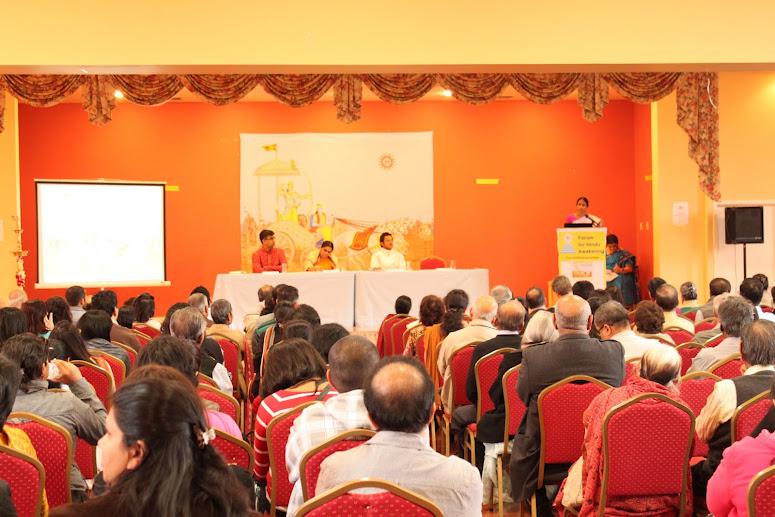 Mississauga, ON. Over 250 Hindus from the Greater Toronto area attended the Hinduism Summit (Dharmajagruti Sabha) held in Hindu Heritage Center in Mississauga on Saturday, 28th April. The audience listened raptly as the speakers highlighted the scientific basis of Hindu concepts, emphasized the importance of maintaining a Hindu identity in Canada and addressed issues, such as denigration of Hinduism and genocide of Hindus. Many attendees commended the organizers, Hindu Heritage Center and Forum for Hindu Awakening, on the event’s quality and educational value. Inspired by the event, several attendees want to join hands to understand, live and preserve Hinduism.The Hinduism Summit commenced in a traditional Hindu way, with blowing of a conch, Vedic recitations and the speakers lighting a wick oil lamp. During the presentations, Hindu activist and avid reader of the Hindu Janajagruti Samiti website, Yogesh Gandre warned about the adverse impacts of denigration that most people are unaware of. He appealed, “Do not condone the spiritual pollution caused by denigration in the name of freedom of expression, just as you do not condone noise or air pollution!” The next speaker, Rishita Gadoya presented Spiritual Science Research Foundation’s research findings on vegetarian vs. non-vegetarian food, wax vs. ghee flame, cremation vs. burial, efficacy of Agnihotra sacrificial fire against nuclear fallout, etc. It showed the scientific nature of Hindu spiritual concepts and the advancement of Hindu Sages in spiritual research.Acharya Vivek of Chinmaya Mission in Niagara, the main speaker at this Summit, spoke on ‘maintaining a Hindu identity in Canada’. He explained that to be a Hindu, external things like wearing a vermillion mark on the forehead or following a Hindu dress code are not needed. However, since these Hindu practices help raise our spiritual purity they do facilitate inner sadhana or spiritual practice needed to realize one’s divine, spiritual identity. “Only if you know who you are, will you know what (you have) to do!” the Acharya emphasized. He gave his own example, wherein no amount of worldly accomplishment could bring him the deep peace that he experienced after making rigorous efforts to learn about Hinduism and to live Hinduism by way of spiritual practice. Bhavna Shinde Hurley, spokesperson of Forum for Hindu Awakening, concluded the presentations with the topic, ‘Understanding, living and preserving Hinduism’. She shared some of the issues observed in North America concerning Hindus, such as distortion of Hinduism and Hindu History in academic textbooks, anti-Hindu bias in the media and physical attacks on Hindu temples. She explained that being a Hindu is the attitude of being sattva (spiritual purity) predominant. Hence, learning about Hindu concepts to increase the spiritual purity in and around oneself via Dharmik practices and promoting such education is the lasting way to understand, live and preserve Hinduism. Bhavna urged the audience to offer some time daily towards learning about the issues faced by Hindus, and to do some saadhana daily for greater success in overcoming the issues. This event, 14th in the series of Hinduism Summits held in North America, Europe and Australia since mid-2009, concluded with near unanimous passing of resolutions of concern to the local Hindu community. The resolutions, namely offering Sanskrit - the language of ancient Hindu Scriptures - as a foreign language for public school students, investigating the human rights abuses by the Bangladeshi government against Bangladeshi Hindus, and recognizing Diwali as an important holy day of Hindus, were signed by the attendees and will be duly mailed to the authorities. This was followed by a lively half hour of the Summit speakers answering questions by the attendees. They addressed practical questions like, ‘What defines me to be a Hindu?’ ‘While praying can we touch the deity?’ ‘Why are coconuts broken in front of the deity’s murti (statue)?’ ‘How to dispose of a Hindu printed calendar with Deities’ pictures on it?’ The attendees spent the rest of the evening over the exhibition of posters and books on Hindu spirituality, history and Hinduism’s unique science.The Forum for Hindu Awakening (FHA) is a charitable organization devoted to awaken society to the unique spiritual science behind Hindu Dharma concepts and practices, to motivate people to live and preserve them and to facilitate the spiritual progress of humanity. The Forum for Hindu Awakening is a non-profit organization in the USA, tax exempt under Section 501(c)(3) of the Internal Revenue Code (Tax ID: 26-3007850.)PMB 220 3111 Rt.38, Ste. #11 Mount Laurel, NJ 08054, USA. Toll-Free contact number: +1 877 303 3FHA (1 877 303 3342)

You can edit or delete your press release Mississauga Hindus awaken to Hinduism’s science, denigration and preservation at Hinduism Summit here