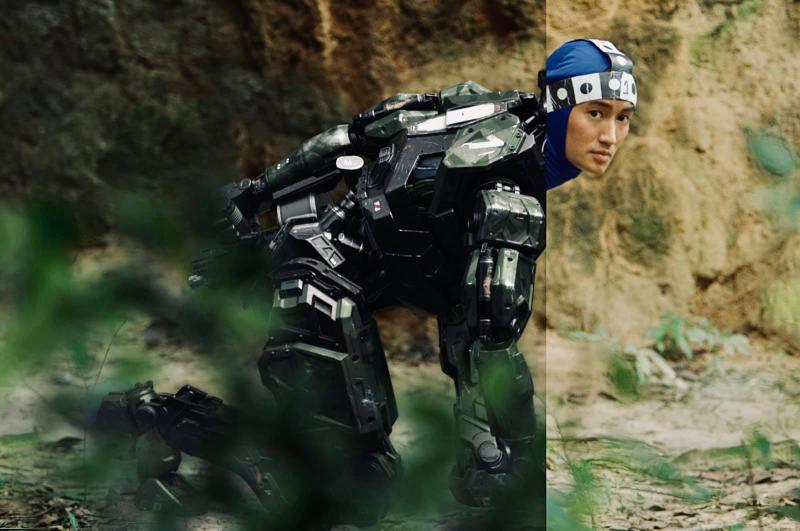 Conrad Pratt in Monsters Of Man

LOS ANGELES - December 7, 2020 - Monsters of Man, a Sci-Fi Action feature film by Australian director/producer/writer Mark Toia, is set to make it’s global debut this winter. The movie, shot in Cambodia, centers around a group of young American doctors caught in the middle of a secret military robot operation gone haywire. One of those doctors, Hawaiian/Korean-American actor Conrad K. Pratt (Hawaii Five-O, The Wolverine, GLEE, The Real O’Neals) was doing triple duty on set, also performing as the production’s main stuntman and CGI/Mo-Cap artist.

Pratt, a former professional dancer most notable for touring with Ricky Martin, says he relied heavily
on his background in dance and movement to bring these killer robots to life,

“There are so many factors that go into creating a character from scratch, which is equally exciting and terrifying to be trusted with. Mark (Toia) shared the renderings of what the robots would look like and that’s all I really had to run with. I remember the night before my first day on set walking around my hotel room like a freaking robot, HA! It was a lot of prep and experimenting but I also credit Mark’s ability to let me explore these characters so freely as robot movements can go cheesy super quick. But because of that freedom, we got some epic robots out of it!”

Having past experience in stunts and Mo-Cap, Pratt jumped at the chance to get (blue) suited up again.

“It’s really remarkable what technology can do these days. The best part of this I will say was suiting up in
Mo-Cap again. You get to fully immerse yourself in a world that is your own masterpiece, which can
sometimes scare an actor because we have this artistic need to always be right. But in Mo-Cap, nothing is wrong! It can feel silly at times, I mean I had to yell “BANG BANG!” every time a robot shot a gun. But getting to be a little rough with the actors here and there gave them that uncertainty of what I was actually going to do. Which, in a really sick way, made the role that much more fun!”

When asked about the diversity movement currently happening in Hollywood, Pratt added,

“I’m so stoked to see the direction we’re going in. I’m excited for the stories that feature my LGBTQ+ and BIPOC brothers and sisters, finally getting the spotlight they deserve so that everyone can feel like they belong. As a gay actor of color myself, being able to represent several communities on a project of this scale was an absolute honor and I will continue to be a warrior for the LGBTQ+ and BIPOC communities.”

07-18-2018 | Business, Economy, Finances, B …
Accord Market
Global Aero-engine Market 2018 - Pratt & Whitney, GE, Rolls-Royce
Accord Market, recently published a detailed market research study focused on the “Aero-engine Market” across the global, regional and country level. The report provides 360° analysis of “Aero-engine Market” from view of manufacturers, regions, product types and end industries. The research report analyses and provides the historical data along with current performance of the global PP Pipe industry, and estimates the future trend of Aero-engine on the basis of this
02-27-2018 | Business, Economy, Finances, B …
business new
Global Tsturboshaft Engines Market 2018 - Konner, MOTOR SICH, PRATT & WHITNEY
The statistical surveying information incorporated into the Tsturboshaft Engines report is the aftereffect of significant essential and optional research exercises. The report fragments the worldwide market for Tsturboshaft Engines based on makers, item compose, applications, and Region. In this report, each fragment is contemplated completely and measurements are introduced in detail. The report offers an exact outline of the worldwide Tsturboshaft Engines advertise covering key factors, for example, drivers and
10-03-2017 | Business, Economy, Finances, B …
Market.Biz
Global Aircraft Systems Market 2017 - GE , Rolls-Royce, Pratt & Whitney
Global Aircraft Systems Market 2017 report presents the fresh industry data and forthcoming industry trends, allowing you to pinpoint the products and clients driving Revenue growth and profitability. The report Global Aircraft Systems Market offers a comprehensive and executive-level overview,including definitions, classifications and its applications. The Aircraft Systems market is expected to reflect a positive growth trend in upcoming years. The pivotal driving forces behind the growth and popularity of Aircraft
09-06-2017 | Advertising, Media Consulting, …
Market.Biz
Global Aircraft Systems Market 2017 - Rolls-Royce , Pratt & Whitney , Safran
The motive of this strategic research report entitled "Global Aircraft Systems Market 2017" is to provide company officials, industry investors, and industry members with consequential insights to enable them make reliable strategic decisions regarding the opportunities in the global Aircraft Systems market. Key Notes On Aircraft Systems Market: "Global Aircraft Systems Market 2017 "offers crucial insights into the global Aircraft Systems market along with the market size and estimates for the duration
02-23-2017 | Industry, Real Estate & Constr …
Market Report
Aero-engine Market 2017- GE, Pratt & Whitney, Rolls-Royce, Safran
Aero-engine Market 2017 Industry research report provides important information to identify and analyze the market need, market size and competition. This market research report used in maintaining competitiveness over competitors. “An aero-engine or aircraft engine is the component of the propulsion system for an aircraft that generates mechanical power. Aircraft engines are almost always either lightweight piston engines or gas turbines, except for small multi copter UAVs which are almost
06-18-2012 | Arts & Culture
Light Space & Time Online Gallery
Kay Pratt Announced as the Gallery's Featured Artist
Jupiter, Florida - June 16, 2012 -- Light Space & Time Online Art Gallery is pleased to announce that Californian artist Kay Pratt is this month's featured artist. Kay has participated in several of the gallery’s art exhibitions and she won the Second Annual 2011 Abstract Exhibition for her painting “Play Red”. Kay states this about her art and her life in California, "As a native Californian I spent my childhood
Comments about openPR
OpenPR ist the nicest and most clearly laid out PR platform I have seen to this day. The press releases are displayed very nicely and clearly and without any unnecessary frills. The updates are fast and the finished release looks appealing and is clearly legible. Even with 16 years of experience one discovers new things from time to time. Congratulations!
Gabriele Ketterl, Director Marketing & PR, Menads