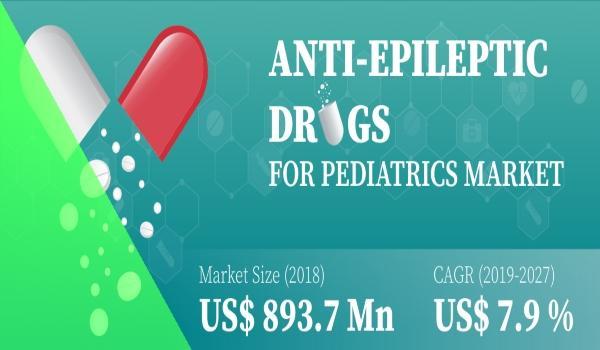 Anti-epileptic drugs for pediatric treatment are expected to experience visible shifts in terms of demand and adoption owing to factors such as rise in global prevalence of epilepsy, increasing healthcare spending and emergence of efficacious anti-epileptic drugs. Furthermore, co-morbidities associated with epilepsy such as depression and anxiety are on the rise and major players are investing in research and awareness programs for reduction of these co-morbidities along with epilepsy.For instance, Sanofi, S.A. invests in awareness programs in regions such as Latin America, Africa, and Asia Pacific. The company offers products with price adjustments in these regions to increase the access to treatments. Moreover, product launches and approvals such as the Vimpat drug approvals in Europe and Japan for the treatment of partial onset seizures for UCB Pharma in 2016, are aiding the market growth.Key players operating in the global Anti-epileptic Drugs for Pediatrics market include Mylan N.V., Cephalon, Inc., GlaxoSmithKline plc, Janssen Pharmaceuticals, Novartis AG, Pfizer, Inc., Sanofi S.A., UCB Pharma Limited, Sunovion Pharmaceuticals Limited, Valeant Pharmaceuticals International, Inc., Zynerba, Zogenix, and Insys Therapeutics.Get PDF Brochure Of This Research Report @ https://www.coherentmarketinsights.com/insight/request-pdf/823Market DynamicsRising incidence of epilepsy is expected to drive the anti-epileptic drugs for pediatrics market growth over the forecast period. For instance, according to the American Academy of Pediatrics 2016, epilepsy is the most common childhood brain disorder in the U.S., and nearly 3 million Americans have this condition (450,000 of which are under the age of 17).Major players are focusing on providing viable treatment options for patients suffering from refractory epilepsy or drug resistant epilepsy. The add-on or adjunctive therapies offer significant positive results with relatively less side effects. This, in turn, is expected to boost the market growth for anti-epileptic drugs. Some notable drugs in the pipeline such as Lyrica (Pregabalin), are showing potential therapeutic effects with fewer drug interactions, improved side effect profiles, and enhanced overall safety. These factors are expected to favour the market growth since most of the older treatments such as carbamazepine, valproate, and phenytoin, although effective, have very poor safety profiles and are not well-tolerated by pediatric patients.Newer drug therapies with symptom specific indications are expected to boost market growthEpilepsy is a highly prevalent disorder, and an estimated 50 million people worldwide are suffering from epilepsy, out of which almost 80% live in emerging economies as per the World Health Organization (WHO) 2019. According to the American Academy of Pediatrics, as of April 2017, epilepsy was estimated to affect 0.5% to 1% of children globally and is the most prevalent chronic condition of the central nervous system among children. According to Epilepsy Foundation, each year, around 150,000 new cases of epilepsy are reported in the U.S. and the rate of occurrence is high among young children and geriatric population. Furthermore, in 2015, the Society of Neuroscience stated that epilepsy affected around 10.5 million children worldwide, and the type and severity of the disorder varies significantly.The incidence and prevalence of epilepsy in children appears to be lower in developed economies and highest in rural areas of emerging economies. This is mainly attributed to the presence of FDA-approved anti-epileptic drugs in developed economies and vast distribution channels ensuring higher accessibility to treatments. Scientific and technological advancements have led to the introduction of several medications in the past decade, which are used in combination in a personalized way by physicians for the treatment of pediatrics. Drugs approved by the U.S. Food & Drug Administration (FDA) include Phenytoin (Dilantin), Carbamazepine (Carbatrol), Divalproex Sodium (Depakote), and Ethosuximide (Zarontin).Ask For Discount Before Purchasing This Business Report @ https://www.coherentmarketinsights.com/insight/request-discount/823Global Anti-epileptic Drugs for Pediatrics Market - RestraintsHowever, lack of awareness regarding epilepsy and non-availability of medical facilities in poor and developing countries are some of the factors that are expected to hinder growth of the anti-epileptic drugs for pediatrics market.Global Anti-epileptic Drugs for Pediatrics Market - Regional InsightsOn the basis of region, the global anti-epileptic drugs for pediatrics market is segmented into North America, Latin America, Europe, Asia Pacific, Middle East, and Africa. North America holds a dominant position in the global anti-epileptic drugs for pediatrics market owing to increasing number of regulatory approval for drugs. For instance, in 2018, Eisai Inc. received U.S. Food and Drug Administration (FDA) approval for its antiepileptic drug, FYCOMPA (perampanel) CIII, for monotherapy and adjunctive use in pediatric patients 4 years and older for the treatment of partial-onset seizures (POS) with or without secondarily generalized seizures.Asia Pacific is the fastest growing region in the global anti-epileptic drugs for pediatrics market owing to increasing product launches. For instance, in 2019, GlaxoSmithKline plc. launched dispersible tablet formulation of Lamictal (lamotrigine dispersible tablet) for the treatment of epilepsy in China for pediatric patients.Contact UsMr. Shah Coherent Market Insights 1001 4th Ave, #3200 Seattle, WA 98154 Tel: +1-206-701-6702 Email: sales@coherentmarketinsights.comAbout Coherent Market InsightsCoherent Market Insights is a prominent market research and consulting firm offering action-ready syndicated research reports, custom market analysis, consulting services, and competitive analysis through various recommendations related to emerging market trends, technologies, and potential absolute dollar opportunity.