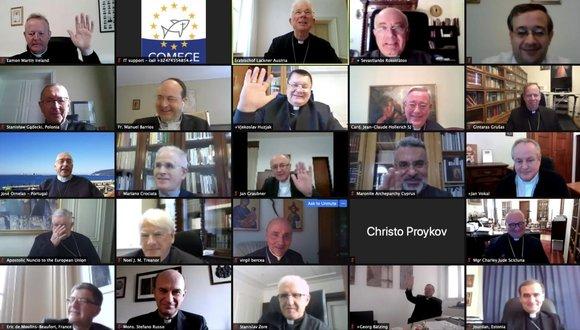 For the first time in its 50-year history, the Catholic Church in the European Union (COMECE) has asked ALL member states of the European Union to adopt the policies of Rome. The top Roman Catholic leaders from Europe have shared their path to a better future with national governments across Europe. And what is the path that Europe should follow? Below is part of the letter written by COMECE to the European Union member states. The following was published by both COMECE and Vatican News:“Pope Francis with his Encyclical Laudato Si’ has provided a compass for shaping a new civilization. In his new Encyclical Fratelli tutti, signed a few weeks ago on the tomb of Saint Francis of Assisi, he calls the whole of humanity to universal brotherhood and social friendship, not forgetting those on the margins, wounded and suffering. The Principles of Catholic Social Teaching as human dignity and solidarity, like also the preferential option for the poor and sustainability, can be guiding principles to build up a different model of economy and society after the pandemic.” [1] [2]The letter was signed by the following:Gualtiero Cardinal Bassetti, Archbishop of Perugia-Città della Pieve, Italy Msgr. Georg Bätzing, Bishop of Limburg, Germany Jozef Cardinal De Kesel, Archbishop of Mechelen-Brussels, Belgium Msgr. Éric Marie de Moulins d’Amieu de Beaufort, Archbishop of Reims, France Msgr. Stanisław Gądecki, Archbishop of Poznań, Poland Msgr. Jan Graubner, Archbishop of Olomouc, Czech Republic Msgr. Gintaras Linas Grušas, Archbishop of Vilnius, Lithuania Jean-Claude Cardinal Hollerich, S.J., Archbishop of Luxembourg, COMECE President Note: Archbishop Jean-Claude is both a Jesuit and President of COMECE [3] Msgr. Philippe Jourdan, Apostolic Administrator, Estonia Msgr. Czeslaw Kozon, Bishop of Copenhagen, Denmark, Nordic Bishops’ Conference Msgr. Dr. Franz Lackner, O.F.M., Archbishop of Salzburg, Austria Msgr. Eamon Martin, Archbishop of Armagh, Ireland Juan José Cardinal Omella Omella, Archbishop of Barcelona, Spain Msgr. José Ornelas Carvalho, S.C.I., Bishop of Setúbal, Portugal Msgr. Aurel Percă, Archbishop of Bucarest, Romania Msgr. Christo Proykov, Eparchal Bishop of Saint John XXIII of Sofia, Bulgaria Msgr. Želimir Puljić, Archbishop of Zadar (Zara), Croatia Msgr. Sevastianos Rossolatos, Archbishop of Athens, Greece Msgr. Charles Jude Scicluna, Archbishop of Malta Msgr. Youssef Antoine Soueif, Archbishop of Tripoli del Libano (Maronite), Cyprus Msgr. Viktors Stulpins, Bishop of Liepāja, Latvia Msgr. Johannes H. J. van den Hende, Bishop of Rotterdam, Netherlands Msgr. András Veres, Bishop of Győr (Raab), Hungary Msgr. Stanislav Zore, O.F.M., Archbishop of Ljubljana, Slovenia Msgr. Stanislav Zvolenský, Archbishop of Bratislava, SlovakiaAre we awake or are we sleeping because this is a wake-up call? Can we recognize what is so obvious? Today, in our world, rulers, statesmen, scientists, business men, believers and unbelievers alike recognize that the handwriting of destiny is on the wall. What about the Remnant people of God? Are we “watching and praying” (Luke 21:36) and are we “occupied” in the Lord’s work, until He comes (Luke 19:13)?Rome is calling on the nations of Europe to adopt the encyclicals of Pope Francis, Laudato Si’ and Fratelli Tutti, as a “compass for shaping a new civilization.” The prophetic word and the warnings of Revelation are beckoning us to awaken because time is running out. The clock is ticking. The countdown has begun. But since judgment is deferred, the cry from God’s slumbering people is heard:“My lord delayeth his coming.” Luke 12:45.“Tomorrow shall be as this day, and much more abundant.” Isaiah 56:12.“All things are continuing as they were from the beginning of creation.” 2 Peter 3:4.Whatever our attitude may be towards these prophetic events, let us remember that nations, churches and individuals are being weighed in the divine balances of God’s judgment. Our deeds are being recorded just as surely as God is writing on the walls of this generation telling us to get ready. Sinners in Zion and sinners in Babylon give your hearts to Jesus for the day is near; and it must come.“While they (Babylonians) were engaged in this sacrilegious feast, a bloodless hand traced opposite the king, characters of writing that could not be read or interpreted by any of the magicians or wise men of the court. Then the king’s countenance was changed, and his thoughts troubled him … The writing on the wall gave evidence that there was a witness to their evil deeds … Before them passed, as in panoramic view, the deeds of their evil lives, and they seemed to be arraigned before the Judgment, of which they had been warned.” (Signs of the Times, July 20, 1891).Sources[1] https://www.vaticannews.va/en/church/news/2020-11/comece-solidarity-coronvirus-eu-hope-europe.html[2] http://www.comece.eu/dl/KlmuJKJKkKNKJqx4lJK/2020-11-18_EN_Message_of_the_EUBCs_Presidents.pdf[3] http://www.comece.eu/archbishop-jean-claude-hollerich-s.j.-elected-new-president-of-comeceContact: Andy Roman, Publisher Address: Advent Messenger, PO Box 96, Dover, OK 73734 Phone: (888) 299-2119 Website: www.adventmessenger.org Email: adventmessengers@gmail.comAbout: Advent Messenger provides news and commentary on current events, top stories, social trends and political and religious events. For more news visit www.adventmessenger.org

11-23-2021 | Leisure, Entertainment, Miscel …
Advent Messenger
Adventist Black Awareness Celebration Fails After School Published Photos of Whi …
A Seventh-day Adventist Academy in Tocantins, a state in central Brazil, decided to “honor” November 20, the national day of black awareness in Brazil. Gurupi Adventist College (Academy) posted images on its Facebook page of white students painted in black and wearing wigs. In other words, students came to school dressed in “blackface.” Blackface is when white people paint themselves dark to imitate those of African descent. Blackface is considered
11-22-2021 | Leisure, Entertainment, Miscel …
Advent Messenger
COP26: Adventism’s New Obsession to Join the Climate Change Movement
It is beyond belief that the Seventh-day Adventist Church does not believe in getting involved in the national debate on abortion or the LGBT+ agenda. No, we can’t get involved in the real moral problems of our time that are so widespread in the world today because we have lost our prophetic voice to defend the law of God in the public arena. So instead of shedding light to these
11-22-2021 | Leisure, Entertainment, Miscel …
Advent Messenger
Seventh-day Adventists, in Partnership with ADRA, Praise COP26 and will Launch a …
The Seventh-day Adventist Church is adopting the same secular viewpoint on climate change being proposed by COP26, Pope Francis and other globalists. This secular view is one that completely ignores the Holy Scriptures and promotes the radical hysteria that our human civilization will come to an end within the next 10 years or less unless immediate and bold action is taken. On October 29, 2021, the Scottish Mission of Seventh-day
11-22-2021 | Leisure, Entertainment, Miscel …
Advent Messenger
Our Love for Heresy has Led Us to the Cathedral of Trent (Council of Trent) to S …
On October 10, 2021, Seventh-day Adventists joined an ecumenical event at the Cathedral of Trent, the same Roman Catholic building where the Council of Trent was held. The Council of Trent (1545-1563) was the official Roman Catholic response to the Protestant Reformation. This council affirmed the supremacy of the papacy, condemned the Protestant Reformers, revitalized the Inquisition, maintained tradition above Scripture and placed the Bible on a list of forbidden