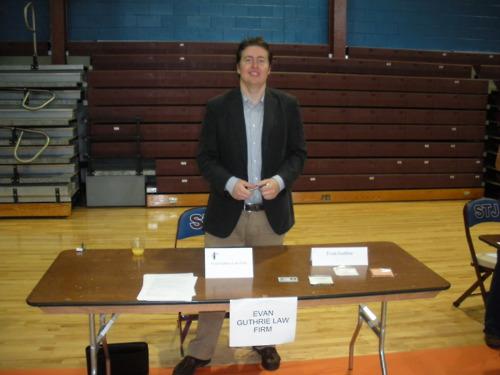 Evan Guthrie of the Evan Guthrie Law Firm in Charleston, South Carolina participated in the career fair for St. John’s High School in John’s Island ,SC on Friday March 30th 2012. Attorney Evan Guthrie represented the legal profession and had a table to speak to students at the high school that were interested in careers in the law. The career fair lasted for about three hours and allowed for all of the students at the school to have a chance to explore companies and careers that were present. Many students stopped by Mr. Guthrie’s table to ask questions that ranged from how difficult it was to become an attorney to what the best areas of law practice were. St. John’s High School is in the Charleston County School District and encompasses many students that live on John’s Island and surrounding areas. The career fair featured a diverse number of careers as Attorney Guthrie’s table was between the Charleston Riverdogs and Roper St. Francis. The students were very interested in careers in law and took an informational handout that Mr. Guthrie prepared about what steps were necessary to go to law school and become a lawyer. Attorney Guthrie also described some of his experiences in his own legal career to some of the interested students. Mr. Guthrie was happy to be able to participate in the career fair and looked forward to returning to the school next year.Evan Guthrie Law Firm is licensed to practice law throughout the state of South Carolina. The Evan Guthrie Law Firm practices in the areas of estate planning probate wills living trust special needs trusts personal injury accident and divorce and family law and entertainment law. For further information visit his website at http://www.ekglaw.com . Follow on Twitter http://twitter.com/ekglaw Like on Facebook http://www.facebook.com/ekglaw . Avvo http://www.avvo.com/attorneys/29401-sc-evan-guthrie-3562169.html LinkedIn http://www.linkedin.com/company/2526866 Google + https://plus.google.com/107399604138666247588/about Evan Guthrie Law Firm 164 Market Street Suite 362 Charleston SC 29401 843-926-3813Evan Guthrie Law Firm 164 Market Street Suite 362 Charleston SC 29401 843-926-3813 Evan Guthrie