The Arcadia Education Project Is an Interesting Example of How It Can Be Possible to Build in a Delicate, Fragile Environment Such as a River Floodplain 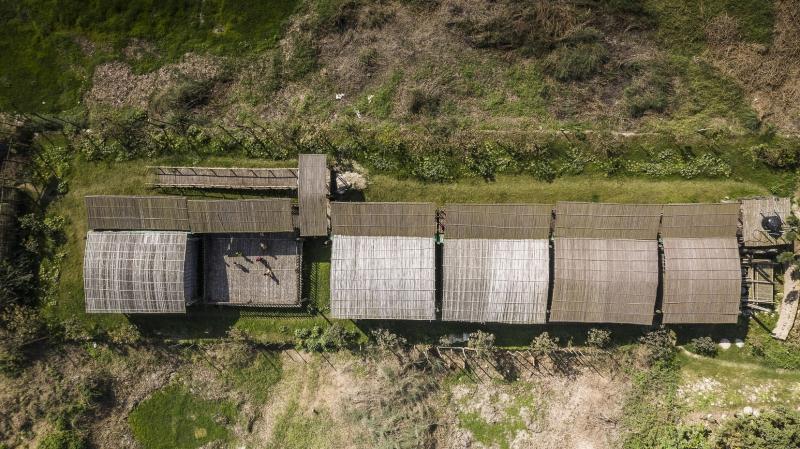 The Arcadia Education Project Is an Interesting Example of How It Can Be Possible to Build in a Delicate, Fragile Environment Such

Architect Saif Ul Haque’s Arcadia Education Project is a modular structure in South Kanarchor, Bangladesh, a delicate, fragile environment by the Dhaleshwari River, which floods for several months every year. The project, winner of the 2019 Aga Khan Award for Architecture, is a complex including an elementary school, a hostel, a nursery and a training center; an amphibious structure that does not disrupt the river environment, but adapts in response to flooding in the monsoon season with innovative use of traditional local building methods and materials.The Arcadia Education Project by architect Saif Ul Haque of Dhaka and his team is an interesting example of how it can be possible to building in a delicate, fragile environment such as a river floodplain. The site is in South Kanarchor, Bangladesh, by the Dhaleshwari River: an area subject to heavy monsoon flooding. Rather than disrupting the ecosystem with constructions such as embankments or tall stilts, solutions which would have made the school appear isolated high above its surroundings in the dry season, the architects resorted to traditional local building techniques and materials, used in innovative ways to create an “amphibious structure” that adapts to its surroundings. The jury of the Aga Khan Award for Architecture included the project in the list of six winners of a prize of 1 million dollars in 2019.The structure designed by architect Saif Ul Haque does not disrupt the delicate river ecosystem, but adapts to the situation of its natural environment, which is flooded for about one third of the year: floating on water or sitting firmly on the ground, depending on the season, the building permits uninterrupted use of the school throughout the year. The building is composed of three main multipurpose spaces (classrooms, an office, an open-topped platform, and a toilet/bathroom structure), connected by a single corridor. The structure is built out of three different types of bamboo, a material chosen for its wide availability locally and durability as well as the lightness that makes it easy to transport. The bamboo was treated in different ways for different uses; the material used to make the anchorage poles and the roof, for example, was chemically treated to prevent rot, while other elements were merely waterproofed, using traditional local techniques. The judges of the Aga Khan Award appreciated architect Saif Ul Haque’s ability to think outside the box, using local technologies while coming up with a solution which could be adapted for use in other parts of the world, in response to rising sea levels. The apparent simplicity of the project conceals innovative solutions that solved complex problems such as buoyancy, anchorage against the current of the river, and waste management. Finally, the judges appreciated the virtuous synergy created among the key players in the project, the architect, the client and the builder, as well as its its great social value, promoting cultural and socio-economic development in rural areas and among particularly vulnerable members of the community.Arcadia Education Project Address: South Kanarchor, Hazratpur, Keranigonj, Beside Alipur Bridge Dhaka-1310, Bangladesh Contact Information: Name: Nafisur Rahman Phone: +8801933355109After four decades of teaching in United Kingdom, Razia Alam returned to her home country of Bangladesh where she established a school for underprivileged children, using her pension funds.When the lease on the existing premises of this school expired, its founder sought out a site on which to build. The budget restricted her choice to areas not well suited for development. Wanting the school to be near water, she purchased a riverside plot which, it turned out, is submerged in up to 3m of monsoon water for a third of the year.Rather than disrupting the ecosystem to create a stabilised mound for building on, or erecting a structure on stilts that would have been too high in the dry season, her chosen architect – a lifelong acquaintance – devised the solution of an amphibious structure, anchored to the site, that could sit on the ground or float on the water, depending on the seasonal conditions.The building footprint was levelled using retaining walls of sandbags with sand, earth and local brick infill, and used tyres fixed atop for cushioning. Bamboo posts sunk 2m into the ground serve as anchoring points for the school’s various independent but interconnected rectangular structures: three multipurpose spaces used mainly as classrooms; office; open-topped platform; toilet/bathroom structure; septic tank and water tank structures; and a single corridor offering access to all spaces. Built of three types of bamboo, they are kept afloat by substructures of used 30-gallon steel drums within bamboo frames.

You can edit or delete your press release The Arcadia Education Project Is an Interesting Example of How It Can Be Possible to Build in a Delicate, Fragile Environment Such as a River Floodplain here

04-28-2020 | Leisure, Entertainment, Miscel …
Shahab x
10 interesting Facts about Shahab Signal.
We all have been told in our childhood that how we won't be able to succeed and achieve something in life if we do not study and get a degree of college. Dropping out of school or college to pursue our dream always considered a foolish and dangerous decision in our society however, that's not true in Shahab Signal story and for this we bet you 10 interesting facts about
02-26-2018 | IT, New Media & Software
TMR Research
Marketing Automation Software Market - Interesting Prospect for Players 2017 - 2 …
Global Marketing Automation Software Market: Overview Marketing automation is the use of software that pertains to the complete or partial automation of actions in the marketing process. At the moment, some of the key features of marketing automation software involve those actions that are extremely repetitive in nature and take vast amounts of time to do manually. This includes the use of social media platforms and emails to reach out to
08-15-2017 | Advertising, Media Consulting, …
Future Market Insights
Interesting Research Report on the Future of Hearing Implants Market
Hearing implants are an option when conventional hearing aids no longer give enough benefit. Implants are designed for different types of hearing loss. They are surgically implanted devices which can give you the sensation of sound. Hearing loss can be caused by many different causes, some of which can be successfully treated with medicine or surgery, depending on the disease process. There are three types of Hearing loss: Conductive hearing loss,
07-27-2017 | Business, Economy, Finances, B …
Future Market Insights
Interesting Research Report on the Future of Residential Dishwashers Market
Market Overview The rising penetration levels of household appliances has led consumers more privy about the benefits of using dishwashers. The demand for residential dishwashers has been radically influenced by the changing consumer preferences with respect to sanitisation devices. Sanitising the utensils by lowering the germination of bacteria has been observed as the primary feature influencing the global adoption of residential dishwashers. Additionally, the need to save time in cleaning utensils
09-13-2012 | Business, Economy, Finances, B …
Chameleon Pharma Consulting
Pharmacy chains in Russia – an interesting outlook
“Obviously, the drug store chains in Russia are becoming more and more important. However, only a few good retail concepts are available at present, which gives a great potential in this area”, says Reiner Christensen from Chameleon Pharma Consulting. “In our views, there is a clear trend that further consolidation among pharmacies will take place and the market share of retail chains will be increasing year by year.” The 1st pharmacy
06-13-2007 | Health & Medicine
Mancubs LTD
Interesting Ways to tackle childhood obesity
Children’s physical fitness standards have dropped drastically in the past years. The main reason is that, all kids activities have been replaced by electronic games and media entertainment. Child obesity and overweight related illnesses have dominated every part of the world. A child from the modern world may find it hard to understand the concept behind child fitness. Our kids have become victims of obesity, poor health which can be associated
Comments about openPR
OpenPR ist the nicest and most clearly laid out PR platform I have seen to this day. The press releases are displayed very nicely and clearly and without any unnecessary frills. The updates are fast and the finished release looks appealing and is clearly legible. Even with 16 years of experience one discovers new things from time to time. Congratulations!
Gabriele Ketterl, Director Marketing & PR, Menads