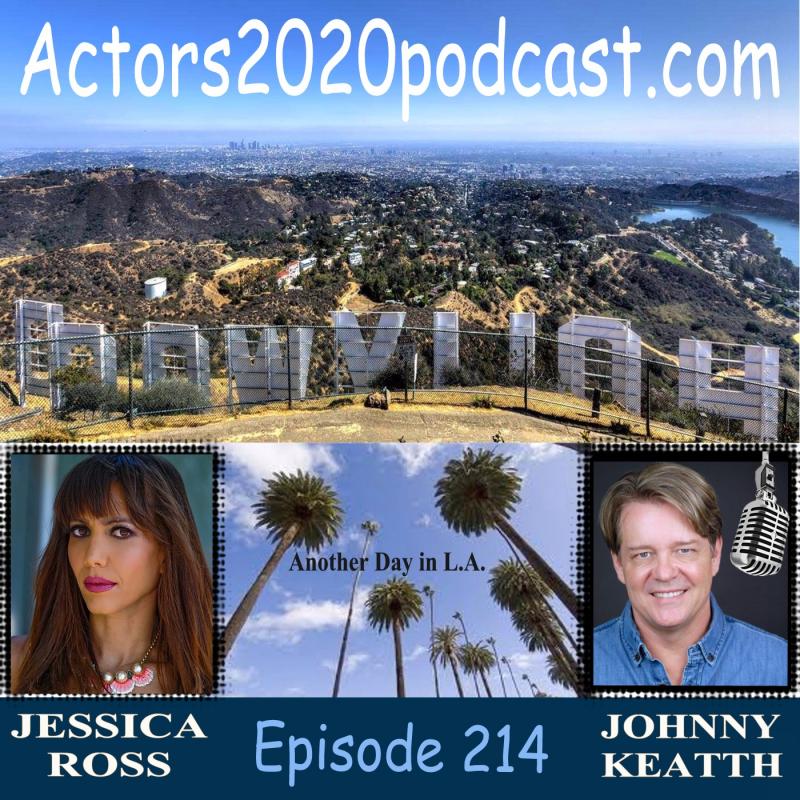 "From Acting to Presenting to Publicity", Jessica Ross had the chance to talk with the Actors 2020 Podcast on episode 214. The goal of the Actors 2020 Podcast is to promote Actors and inspire listeners. Host Johnny Keatth empowers 1 or 2 artists per episode worldwide the ability to promote themselves and share their success stories on his Top Ten International Podcast in Performing Arts.A well-known actress, publicist, and reporter, Jessica Ross returned to Hollywood in 2016 after she began working as a host at WCOBM. She has appeared in popular films, tv shows, and magazines as well as garnering over 200 media placements. Outlets Jessica's been featured on include Indie Activity, Action Magazine, Voyage LA, Cinderella of New York, Juwai, It Can By You, Livein Style Magazine, Buzzfeed, and CBS.In this episode, you will hear the latest about what she has to say relevant to social media, acting, the red carpet, fashion, and what it's like traveling during COVID. Listen to the Actors 2020 Podcast at https://www.podomatic.com/podcasts/actors2020podcast/episodes/2020-11-01T13_58_47-08_003660 Wilshire Blvd Suite 209 Beverly Hills, CA 90211Celebrity Listed PR agency representing elite personalities in * Film & Television * Fashion * Online Public FiguresFor all inquiries, contact Valerie Diaz at Valerie@celebritylisted.com

01-19-2022 | Leisure, Entertainment, Miscel …
Celebrity Listed
Award-Winning Episode of Hollywood Unexpected Premieres January 24th on Jul-TV S …
An award-winning episode of Hollywood Unexpected premieres on January 24th on the Jul-TV Network. This special episode will give its first look at what viewers can anticipate for season one. Hollywood Unexpected is a new reality series that follows the journey of actress Jessica Ross into her dramatic and often crazy life which centers around Hollywood and what happens behind the scenes. With music by producer Dito Godwin and Jon Udell,
05-04-2020 | Leisure, Entertainment, Miscel …
Celebrity Listed
Actress Jessica Ross Announced as Guest on Mogul Studios Live Q&A on Monday, May …
After launching it's new website last week, an exciting new film company, Mogul Studios, has just announced it's line up of guests to be featured on their live Q&A Instagram shows in May. Among the guests will be Jessica Ross. As an actress, publicist, and reporter, Jessica has over 200 media placements and appeared in popular films, tv shows, and magazines. She joins a small sleet group of prominent Hollywood

05-24-2011 | Arts & Culture
ar2com
Actors, musicians and architects become PoolPlayers at our summer school
The summer academy by ar2com /architecture to communications/ is inviting the three professions of musicians, architects and actors to elaborate a play within two weeks. It’ll take place for the first time in September 2011 with the theme: #01 PoolPlay bites. The application to #01 PoolPlay bites will end the 31st of May and can be found online www.PoolPlayer.ar2com.de what ? a summer academy for musicians, architects and actors when ? 18/09/2011 –
01-31-2011 | Media & Telecommunications
Gandhi Film Dear Friend Hitler One of the Most Expensive Independent Indian Films to Date
Indian Actors Receive Warm Reception from Global Audiences
Berlin - Actor Raghuvir Yadav, beloved in India, drew international raves for his role in the crowd pleaser Peepli Live--India's submission in the 2011 Oscar race. Last winter, the film debuted during the Berlin International Film Festival, was well received at the Sundance, Edinburgh, Melbourne, and São Paulo film festivals, and opened around the globe. India has the largest film industry in the world, producing around 3,000 films per year. The
02-19-2008 | Media & Telecommunications
VoiceOverXtra.com
Voice Actors Learn How To Create Podcasts for Fun & Profit
Voice actors now have an additional way to earn money for their talents – by jumping into the hot new media arena of creating podcasts. In fact, voice actors should make that jump now, says Frank Frederick, a veteran voice talent, producer and author, in “Podcasting for Fun & Profit” - a new article and podcast on VoiceOverXtra (www.VoiceOverXtra.com) - the voice-over industry’s online news and resource center. Located in the web
01-22-2008 | Media & Telecommunications
Voices.com
Bettye Zoller Publishes New Podcast for Aspiring Voice Actors
Bettye Zoller, voice instructor and award-winning Simon & Schuster author and recording artist, was featured in episode 30 of the hit voice acting podcast, Voice Over Experts, podcasts.voices.com, the most downloaded and subscribed to voice over podcast for beginner and professional voice actors. This is Ms. Zoller’s third contribution to the podcast. In Bettye Zoller’s "Learning Voice Over as a Whole”, she reveals that a career in voice over starts not
11-28-2007 | IT, New Media & Software
Encore Performers
Websites for Actors: A New Concept in Web Design
One of the biggest problems actors face is maximising the potential of their online presence. With so many companies offering web design services, and such a variety of costs and styles, it is difficult to know where to start. So what options are available for the budding actor? • Bespoke web design Using a web design company to design a bespoke website is the most effective option, but is also the most costly. •
08-24-2007 | Business, Economy, Finances, B …
Voices.com
The Ultimate Business Plan for Voice Actors Published by Voices.com
Toronto, Canada, August 23 – Voice acting is one of the most segmented fields in the audio industry, short on facts, short on statistics, and one could say, short on business procedure. Voice acting was one of those businesses the majority of people found hard to define, pin down and map out a clear vision for financial success as a freelance voice actor, that is, until now. The
Comments about openPR
OpenPR ist the nicest and most clearly laid out PR platform I have seen to this day. The press releases are displayed very nicely and clearly and without any unnecessary frills. The updates are fast and the finished release looks appealing and is clearly legible. Even with 16 years of experience one discovers new things from time to time. Congratulations!
Gabriele Ketterl, Director Marketing & PR, Menads