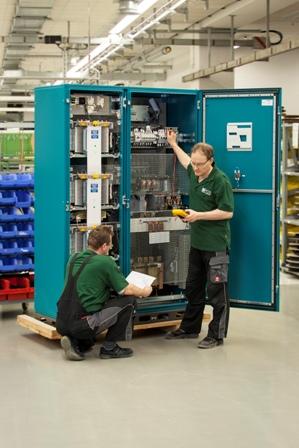 PCS Green Line 1000 enables grid compatibility for the 135 MW Suzlon Cookhouse wind turbine project in South AfricaBerlin, April 2012 – PCS Power Converter Solutions has signed a supplier contract with Suzlon Wind Energy South Africa (Pty) Ltd. to supply Green Line 1000 reactive current converters for the Suzlon Cookhouse Project in the East Cape province of South Africa. Cookhouse is the largest wind energy project in South Africa. PCS is supplying 66 converters in total for the Suzlon S88 Wind Turbines to comply with feed-in regulations. The planned wind farm should generate a total output of 135 MW.Suzlon already received the go-ahead from the South African Minister for Energy in December of last year to start delivering the S88 wind turbines, each with an output of 2.1 MW, for the Cookhouse Wind Energy Facility project. The Cookhouse project is named for the planned location of the wind farm. Cookhouse is a small city in the South African Eastern Cape province in the southwestern part of the Republic. The planned wind farm is one of South Africa’s leading wind energy projects. Already approved by the Department of Environmental Affairs, up to 200 wind turbines may be constructed in the future, which would produce enough energy to power 88,000 homes.For South Africa, this is an important step in the direction of a future-oriented power supply that places the same requirements on wind turbine and grid operators as in Europe. The accelerated development of renewable energies requires power stations to provide more adaptable grid-supporting functions in the form of so-called “grid codes” or feed-in regulations. The Cookhouse project is the latest wind farm required to comply with these new regulations. Compliance was achieved quickly and efficiently with PCS Green Line 1000 reactive current converters. Integrated into the S88 from Suzlon, the PCS converters enable grid support during voltage drops, making the wind turbine compliant with fault ride through regulations. The entire system, comprised of the S88 from Suzlon and the Green Line 1000, has already received the relevant certification for proof of grid compatibility from Germanischer Lloyd. The Green Line 1000 converters have already proven themselves in real-world tests in systems from various manufacturers with a total of 130 MW.Upgradable solution for many wind turbines Stricter grid connection requirements are currently being developed in many countries. These grid codes ensure that, on the one hand, older wind turbines are upgraded to continue to receive subsidies or to be able to feed in energy in the first place. On the other hand, new systems are also affected, because these require proof of compliance with the grid codes in order to receive construction authorization. For this reason, PCS provides Green Line 1000 reactive current converters for upgrades in two performance classes. They are suitable for both smaller and larger wind turbines up to 2500 A and consist of a pulsed IGBT power converter with a voltage link. If the grid is operating under nominal conditions, the converters remain in stand-by mode. If the voltage on the grid drops, the converters are activated and supply the required reactive current for up to six seconds.PCS – a dynamic team with a wealth of experiencePCS is an independent manufacturer of power converters with a wealth experience, approximately 240 qualified employees and a turnover of EUR 63 million. The electrical equipment produced by this Berlin-based company has proven itself more than 70,000 times over – under the harsh conditions of railway use (PCS Rail) as well as for the highly dynamic requirements of industrial use (PCS Blue Line). Since 2005, PCS has ensured that there is a fresh breeze for power generation from wind energy. More than 1,500 PCS Green Line power converters help to operate wind turbines on a technologically-advanced level – with user-friendly design, excellent monitoring and control technology, real and simulated test runs, extensive project management and complete service.For more information:PCS Power Converter Solutions GmbH Am Borsigturm 100 13507 Berlin, Germany Tel. +49 30 297725-0 Fax +49 30 297725-102info@pcs-converter.com www.pcs-converter.com

10-01-2013 | Industry, Real Estate & Constr …
PCS Power Converter Solutions GmbH
PCS and VEM Electrify COWEC – Conference of the Wind Power Engineering Communi …
Joint Presentation at the Conference of the Wind Power Engineering Community (COWEC) The Conference of the Wind Power Engineering Community (COWEC), which is taking place June 18 and 19, 2013, at the Estrel Berlin in Berlin, Germany, will focus on the key challenges facing the wind power industry. More than 80 speakers from 20 countries will provide expert insights into all aspects of the industry, from the different gear types
09-11-2012 | Business, Economy, Finances, B …
PCS Power Converter Solutions GmbH
PCS and Rittal introduce reactive current converter for grid-stable wind turbine …
System provider Rittal also exhibits the top-rated converters from Berlin Berlin, September 10, 2012 – PCS relies on the high-quality electrical cabinets from Rittal GmbH & Co. KG, based in Herborn, Germany. Rittal, in turn, collaborates with PCS on the development of power converters so that the two companies can bring to the market a custom-tailored solution consisting of a reactive current converter and an electrical cabinet. That is why, at
09-11-2012 | Business, Economy, Finances, B …
PCS Power Converter Solutions GmbH
Converters Plus Generators: A Wind Energy Dream Team
PCS and VEM Sachsenwerk celebrate their forward-looking partnership at HUSUM Berlin, August 23, 2012 – Two German companies have joined forces to sustainably optimize electricity generation from wind energy. For the first time ever, PCS Power Converter Solutions from Berlin and VEM Sachsenwerk from Dresden are offering a thoroughly tested and perfectly integrated combination of full power converters and synchronous generators. A beer reception at the HUSUM WindEnergy trade fair is
07-17-2012 | Business, Economy, Finances, B …
PCS Power Converter Solutions GmbH
LVRT: Continuous Voltage and Stable Output in Case of Grid Breakdowns
At HUSUM, PCS will debut the Green Line 3000, the new LVRT solution Berlin, July 2012 – PCS Power Converter Solutions GmbH in Berlin is further expanding its portfolio for generating electricity using wind turbines. The new Green Line Grid Stability product line supplements the existing product range to ensure the low voltage ride through capability (LVRT) of wind turbines. PCS will present examples from the Green Line Family of

11-19-2018 | Business, Economy, Finances, B …
Bizerba (UK) Ltd
COMPANY GAINS GREEN GLORY
BIZERBA UK have won the BRONZE Environment Award in the national campaign to find the greenest individuals, companies, councils and communities. They competed against more than 800 other nominations in the Green Apple Awards for Environmental Best Practice with their project, ENERGY EFFICIENT CUTTING. They were presented with their trophy and certificate at a glittering presentation ceremony hosted by Liz Kendall MP at the Houses of Parliament on November 12th, 2018. As
09-24-2018 | Business, Economy, Finances, B …
GREEN BEAUTY FARMS
GREEN BEAUTY FARMS
Have you ever looked out at the streets and thought you deserve a better place to be? Do you own an SUV and a sedan and still have a landlord? Have ever realized that your surroundings affect your mental state the most. Have you ever even thought that the noise, irritating neighbors and pollution is the actual cause of your anxiety? Are you fed up of spending lots of money
06-08-2018 | Energy & Environment
qyreports
Green energy
Green energy is the electricity derived from smooth assets generating minimum pollution and consists of sun photovoltaic, hydropower, wind electricity, bio-fuels and geothermal. expanded investments in era studies and improvement, supportive regulatory frameworks, extended consciousness and electricity security troubles and environmental concerns amongst others are fueling the boom in call for for clean and inexperienced energy. The report on the Global Smart Cards Automated Fare Collection System Market is a thorough
07-13-2017 | Industry, Real Estate & Constr …
Climaveneta
A green hotel on a green island
Mitsubishi Electric Hydronics & IT Cooling Systems, through its brand Climaveneta, has recently supplied HVAC units to the new luxury hotel now under construction at Benitses Beach in Corfu, also known as the “Green Island” for its thick vegetation. The complex includes a 5-star hotel, 40 bungalows and furnished villas, with a total capacity of 893 beds. It is the first large hotel in Greece, designed to avoid the use
12-12-2014 | Logistics & Transport
German Center for Research and Innovation
Green Logistics
Logistics has become an indispensable component of today’s global economy. On Thursday, December 11, join experts at the German Center for Research and Innovation (GCRI) in New York for a discussion on the future of sustainable logistics. NEW YORK (December 8, 2014) – Global supply chains and distribution networks are a key performance factor for many companies as they attempt to coordinate activities in a way that meets customer requirements at
03-03-2011 | Energy & Environment
GluePlace
100% Green Spray Adhesive
Using current technology both in adhesive compounding and aerosol packaging, Adhesives Solutions, Inc. has developed a true “GREEN” aerosol spray adhesive. The only one of its’ kind on the market today. Introducing V&S 1226 Water Based Foam & Fabric Spray Adhesive, this spray produces bonds with foam tearing strength. It is specially formulated for bonding flexible foams to themselves or other materials such as: wood, metal, paper, fabrics, corrugated, etc.
Comments about openPR
I can't but agree to the positive statements about your portal: easy to use, clear layout, very good search function, and quick editing!
Jens O'Brien, Borgmeier Media Communication