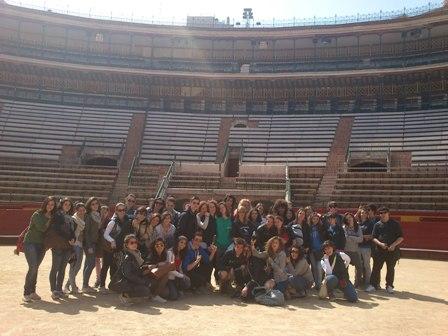 Students of Spanish language decide in favour of a low-priced alternative to Spanish host family Learning a language does not only mean to learn vocabulary and grammar, it also means to get familiar with the culture belonging to a certain language. The last two years more and more Spanish language students realised this connection between culture and language by means of a class trip to Valencia. In Valencia the students of Spanish language get to know a beautiful city, Spanish culture and practise Spanish at the same time. Usually the school classes, mainly coming from Germany, Italy, England and Norway, decided for the accommodation in host families. The accommodation as well as the class trip itself, spare time activities and the language course can be organised by the Spanish language school in Valencia.But frequently the stay in a host family does not coincide with the expectations of the participants of the class trip. “The idea of the constellation of the host families as it exists for example in Germany is not very popular in Spain. Instead of living in a family of a father, mother and often more than one child, the students find themselves living in an apartment together with a divorced or widowed women who finances her standards of living by the accommodation of guests“, explains Andreas Teßmer, director of the Spanish language school Costa de Valencia.Therefore, a new trend can be noticed recently among the language students who decide to spend their school trip in Valencia. More and more Spanish language students decide in favour of a well-priced alternative to Spanish host families which they organise by themselves: the accommodation in one of the numerous youth hostels, like the Nest Hostels situated in the centre of Valencia. There the whole group has the opportunity to find accommodation in private double rooms or in shared dorm rooms with a maximum of 12 beds at reasonable prices. The concept of the Nest Hostels is based on the establishment of a community of young travellers. The structure of Nest Hostels reflects the idea of sharing; everything in the hostel is collectively by its guests: the kitchen, the bathrooms, the dorms and even a bar. Thus, the hostels create ideal conditions for the school classes to meet young people from all over the world.Despite the organisation of the accommodation by the classes themselves, they often ask for help of Spanish schools in Valencia regarding the organisation of the school trip and free time activities. The Spanish language school Costa de Valencia offers to take responsibility for the organisation of a stay. They consider the individual needs of every class to create a program and also offer a tutor to accompany the group. Due to its status as an official educational centre the school can offer entrances for many famous Valencian attractions at reduced prices, like the Bioparc or the Ciudad de las artes y las ciencias. The language school also organises Paella contests, Salsa dancing, a visit to the natural park La Albufera and a lot more. In this way, the Spanish language students have the possibility to experience an unforgettable school trip with their whole class in Valencia, to learn Spanish and get to know Valencian culture at the same time.Since 1995 the language school Costa de Valencia has focused on teaching Spanish to non-native speakers. This language school, which is situated in the heart of Valencia, is a Centro Acreditado of the Instituto Cervantes and a member of many associations. The teaching material, which is used during the lessons, is worked out by a team of well-versed teachers. One of the most important aspects of teaching in this school is the individual involvement of every single student. This way every student has the possibility to speak very much during the language course. Furthermore, both managers place big value the quality of the language lessons and a broadly diversified leisure programme.Costa de Valencia, S.L. Avda. Blasco Ibáñez, 66 E-46021 Valencia Tel.: (+34) 96 361 03 67 Fax: (+34) 96 393 60 49 info@costadevalencia.com www.Costadevalencia.comContact person: Andreas Teßmer (manager) Andreas@Costadevalencia.com

12-14-2016 | Tourism, Cars, Traffic
Costa de Valencia, S.L:
Spending Easter in the sun to live and learn the Spanish life
Spending the Easter holidays in a Spanish school is a perfect present for the whole family Valencia. Easter and its holidays come soon, which also means more time for the family. Many plans are being made, and one could be to spend one week in a Spanish language school in Valencia. This way, you do not only get to see the long-missed sun, but you will also have some quite exciting
12-14-2016 | Tourism, Cars, Traffic
Costa de Valencia, S.L:
Spanish exams are coming, but if you prepare well there is no problem with that
The best way to learn a language is to spend some time abroad – which especially in Spain can be much fun! Valencia. A levels – the one thing you work for all those years studying, a certificate that you really merit. Sometimes it seems as if it comes just too soon, and other times it seems so far away; “I still have time”. There are many reasons to procrastinate, which
12-13-2016 | Tourism, Cars, Traffic
Costa de Valencia, S.L:
The Fallas – a tradition of Valencia has now been declared a Cultural Heritage …
Spanish language students had the chance to participate in an extraordinary event in Valencia Valencia. Those Spanish language students that booked their holidays at the right time were especially lucky. Because they were allowed to experience the joy that occurred as Unesco announced the declaration of Fallas as Cultural Heritage. The Fallas do not only attract a mass of tourists, but also many curios Spanish people and this tradition is
11-23-2016 | Tourism, Cars, Traffic
Costa de Valencia, S.L:
Preparation for Spanish exams
To learn Spanish intensively during one week means living a week full of unforgettable events Valencia. For many students it is no pleasure to think about the final exams. Everything is coming so fast, and you would just prefer to forget all about it. Am I ready for this? When do I need to start to study? Will I still have leisure time? Such questions go through your head, even though

11-23-2016 | Tourism, Cars, Traffic
Costa de Valencia, S.L:
Preparation for Spanish exams
To learn Spanish intensively during one week means living a week full of unforgettable events Valencia. For many students it is no pleasure to think about the final exams. Everything is coming so fast, and you would just prefer to forget all about it. Am I ready for this? When do I need to start to study? Will I still have leisure time? Such questions go through your head, even though
03-08-2011 | Science & Education
Costa de Valencia, S.L:
Learning Spanish with children
A Spanish language school in Valencia organizes during Eastern holidays Spanish courses for parents and their children Valencia. The upcoming Eastern holidays offer the whole family the chance to learn the Spanish language. A Spanish school in the centre of Valencia offers the perfect combination for a family holiday: language training for parents and introductory Spanish for children. The parents attend an intensive Spanish course to learn in a short time as
02-28-2011 | Science & Education
Costa de Valencia, S.L:
Business Spanish
A school of Spanish for foreigners organizes courses of Business Spanish in preparation to the Official Exams of the Chamber of Commerce and Industry of Madrid. Valencia. Knowing a language also means to know specific vocabularies. The aim of most students of Spanish as a foreign language is not only that of improving their fluency, but also that of widening their vocabulary in specific areas that will be useful for finding
02-28-2011 | Science & Education
Costa de Valencia, S.L:
The true Spanish for foreigners
A school of Spanish for foreigners offers its students extra-activities and classes: colloquial Spanish and reading clubs. Valencia. It has been proved that studying a language just in class is not enough to learn it. A Student of Spanish as a foreign language needs not only the grammar, but a full everyday immersion into the language in order to learn those expressions that can’t be found in books. It is important to
02-21-2011 | Science & Education
Costa de Valencia, S.L:
Teaching Spanish as a Foreign Language
A Spanish school in Valencia organizes courses for future teachers of Spanish as a Foreign Language. Valencia. Being a Spanish native speaker doesn’t mean that you are able to teach your language. In order to teach a language, it is not only important to be a native speaker, but also to know how to teach it. Teaching a language requires a series of basic skills that enable you to teach
02-25-2010 | Business, Economy, Finances, B …
Workplace Spanish, Inc.
Workplace Spanish® Introduces “Spanish by the Slice™”
Roswell, GA, February 24, 2010 – Workplace Spanish, Inc., developer of the country’s most widely used Spanish learning materials for the workplace, introduces an economical way for anyone to learn and speak conversational and job-specific Spanish without busting their budget. “Spanish by the Slice™ is a parallel to the pizza business”, says Tom Sutula, president of Workplace Spanish. “With pizza, if you don’t want the whole pie—you order
Comments about openPR
OpenPR ist the nicest and most clearly laid out PR platform I have seen to this day. The press releases are displayed very nicely and clearly and without any unnecessary frills. The updates are fast and the finished release looks appealing and is clearly legible. Even with 16 years of experience one discovers new things from time to time. Congratulations!
Gabriele Ketterl, Director Marketing & PR, Menads