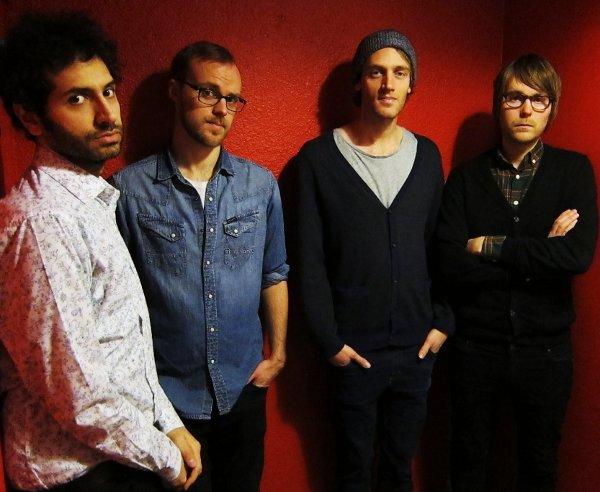 After their dreamlike-melancholic success album "The Search for Connection Contact And Community" in September 2011, THE SEARCH return with a new line-up and album. While the rather silent and melancholic tunes were dominating on the forerunner, the new album "Staying Alive In A Country Industrialized" builds the bridge to the early days of the Swedes.

Survive? In a world, permanently getting faster and more industrailized this doesn’t seem so easy. The woebegone experience to feel alone in a world dominated by humanity, the head and songwriter Razmig Tekeyan had to make. Not least due to this the last album came out so melancholic. More than three years passed by, since the forerunner "Saturnine Songs". Unplanned and pressed by the quest for meaning and losses, because all, exceot drummer Pelle, left the six-headed formation, to concentrate on other duties.

So much better is, that "Staying Alive In A Country Industrialized" forms the perfect sequel of The Search’s story in its content as well as in the music. The will to survive appears within the whole work, love, romance and subtle humour season the songs and the retro-sounds in a way similar to Wave- and Rock-classics such as The Cure or Joy Division replenish the lusty indie pop perfectly.

The Search stay themselves and have proven once more, how developable they are. The band is only a quartette, but the difference is barely sensible. Reduced to the basics, musically stronger and closer to their own roots and grown in life with a lot of own experiences. Two albums within less than one year give the power as well as the upcoming tour, on which The Search will play in germany more often as before.

"Staying Alive In A Country Industrialized" will be available on April 27th 2012 in all well-known stores and download portals as well as on afmusic.

afmusic began parallel to one of germany’s most popular scene-netradios and as a label really got off to a lightning start in 2008. From honorary newcomer-management to a professional business, that uses the possibilities of the world wide web for bands and fans.

03-05-2012 | Arts & Culture
afmusic
afmusic releases compilation "Join the dark side, we have the music!"
On March 13th 2012 the new compilation "Join the dark side, we have the music!" will be released for the first time on CD and digitally on afmusic. Formed in 2008 as a pure digital label, afmusic established sucucessfull the strategy to offer a large part of their repertoir as a netlabel under free license-download, next to the commercial releases in the Dark Wave-, Gothic-, Post Punk- and Independent-scene and
01-27-2011 | Arts & Culture
afmusic
Emerald Park returns with the download-single "Reality Bites"
After the great international success of their album "For Tomorrow" (2008), the solo-albums of guitarist Daniel Jönsson (Danish Daycare "A Story Of Hurt" 2009) and Singer Tobias Borelius ("Du känner mig för väl, farväl" 2010) EMERALD PARK from Mälmö announce their comeback with the download-single "Reality Bites / Someone To Love" in a spectacular way. The expectations will be high, because "For Tomorrow" "...neither needs embedded gimmicks, nor strained efforts from

12-28-2010 | IT, New Media & Software
InfoEsearch
Search Engine Marketing Services
Search engine Marketing is a method of improving the ranking by increasing the volume and quality of traffic to a website in search engine listing. Usually, the earlier a site is presented in the search results, or the higher it ranks, the more searchers will visit that site. To have a website optimization for search engines is an attempt to have it appear in the top of the search engine result
12-28-2010 | IT, New Media & Software
RecruitGuru
Job Search Recommendation System
Job Search System Hemen Parekh, Director – RecruitGuru, announced the launch of a job recommendation system on their job portal www.CustomizeResume.com According to Parekh, their job recommendation system works at two levels. At level one, it captures the frequency with which a jobseeker selects various
07-16-2009 | Leisure, Entertainment, Miscel …
OSN GmbH
New search function introduced
The family network dynastree.com recently launched a new version, including a Turkish language version, and also a new feature - the extended search. It is now possible to use far more parameters to search for possible relatives and ancestors. The new parameters not only include more fields for names (birth name, second surname), but also fields for place of birth, death, and residence. Moreover, both year of birth and year
04-30-2008 | IT, New Media & Software
Axaan Systems Private limited
Cafegadgets Launches Mobile Search
Online retailer of gadgets and gizmos, Cafegadgets.in, has introduced CG Mobile Search, a product and price search on mobile phones. Those planning to buy a gadgets like a laptop, digital camera, mobile phone or an ipod have to just send an SMS - CG - to 53030 and check the prices on Cafegadgets.in to make a comparison. To know the price of the Nokia E61i, one would
02-10-2006 | Advertising, Media Consulting, …
NetTrackers
Lawyer Search
When the need for a lawyer arises, it is important to be able to find a good lawyer who is both knowledgeable in the area that is required, and has a good reputation. Many people would prefer to find a local lawyer whether it is a Maryland lawyer, a New York lawyer or a Kentucky lawyer. A lawyer search can be an overwhelming and often frightening task for anyone who
02-06-2006 | Advertising, Media Consulting, …
NetTrackers
Search Engine Optimisation
Search Engine Optimization (SEO) is an ultimate demand for any small concern aiming to earn profit with a website. If any business house does not have the promotion allowances like Ladbrooks.com, then the only way to promote your web site to the customers is through a search engine. Let us check the methodology that are used in SEO; firstly the SEO makes it sure that a site is "readable" accurately
Comments about openPR
I can't but agree to the positive statements about your portal: easy to use, clear layout, very good search function, and quick editing!
Jens O'Brien, Borgmeier Media Communication