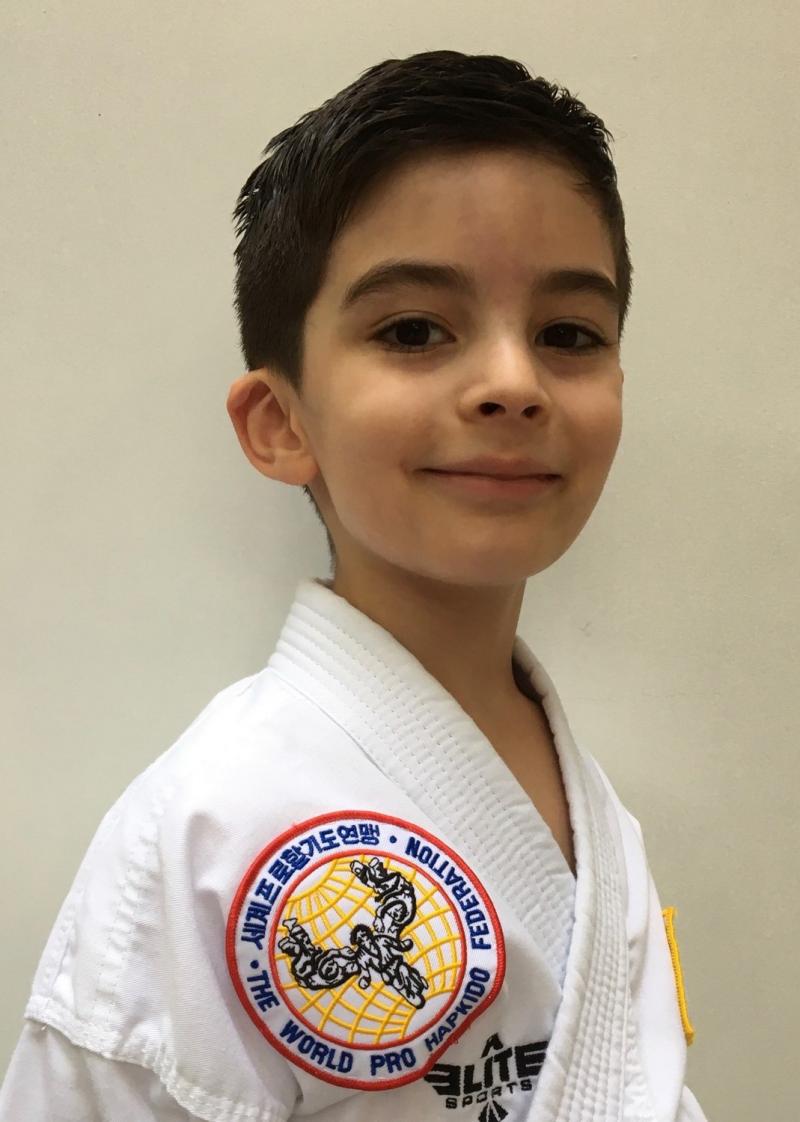 An experienced six-year-old martial artist from Raleigh, North Carolina will be one of the youngest students in the United States to earn his 1st Dan Black Belt in the Korean martial arts form of Hapkido. What makes this young man more special is that he fights the obstacles of having Autism and ADHD on a daily basis. Harvey Alvarenga has been training in martial arts since the age of two. Throughout his journey, he has been homeschooled since the age of three, and in 2019 he became a member of the largest and oldest international high IQ society in the world, Mensa.Through the practice of martial arts, Harvey has been able to hone his hyperactivity and hyperfocus, which is always a challenge for most other sports, into a more focused and disciplined manner. His attention to detail and memorization abilities helped him thrive in Hapkido."Harvey is the most naturally gifted student I've ever had. He has far exceeded my expectations of what a typical Hapkido student represents. Harvey continues to work very hard to exceed his goals and perform always at top level," says Master Eric Laino, Founder and Instructor of the Korean Pro Martial Arts Institute in Clayton, North Carolina, longtime member of the World Pro Hap Ki Do Federation, and Demo Team Leader of the World Hapkido Union.Harvey's achievements will be recognized by the World Hapkido Union (WHU), of Nashville, Tennessee which is led by Doju Ronald Garland, one of the most decorated and respected martial artists worldwide. Harvey will also be the youngest 1st Dan Black Belts recognized by the WHU. A member of the WHU is Grand Master and 9th Dan Black Belt, Richard Hackworth. Hackworth is an international certified Grand Master of the Korean martial arts in Taekwondo, Hapkido and YuSool achieving the highest level of Grand Master in the martial arts. Grand Master Hackworth says about this accomplishment, "Harvey’s work ethic and enthusiasm make him an inspiration to all of us. Being the youngest person to achieve the rank of Black Belt in the World Hapkido Union is just another example of his exceptional abilities. Harvey is a rising star in the martial arts community, and I am sure that we will see many other outstanding achievements as he continues to elevate up the ranks. We hope that other children will be inspired to achieve their dreams because of his example. He is a worthy role model for other children to look up to."The World Pro Hap Ki Do Federation and the Korean Pro Martial Arts Institute will also recognize this achievement thus earning Harvey global respect and recognition from his martial arts peers. "Never has Harvey let his Autism or ADHD get in the way of his goals," said his father Kris Alvarenga. "He is a shining example in an ugly world that that has restricted us from normality; there is still a way to move forward with your life. My son works twice as hard at achieving success. I cannot be prouder of the young man he is and continues to be."Master Laino concluded by saying, "This young man has taught me more than I could ever teach him." Harvey will undergo a multi-hour test mid-November to gain this amazing achievement and earn what few have done before him at this age.World Hapkido Union 6410 Charlotte Pike, #107 Nashville, TN 37209 Contact: Richard HackworthThe World Hapkido Union is the recognized International World Leader for Hapkido. It is a world-class organization comprised of highly skilled and dedicated Hapkido teachers whose skills are rich in tradition of excellence. The Union provides its members unparalleled opportunities for personal growth, development, and career advancement. The World Hapkido Union always strives to exceed the expectations of its members, the schools and the Martial Arts Community. They can be found online at http://www.worldhapkidonews.com and on Facebook under World Hapkido Union.

10-22-2020 | Advertising, Media Consulting, …
LP Information
Hydroxyapatite (HAp) Market Size, Share, Development by 2025
LP INFORMATION recently released a research report on the Hydroxyapatite (HAp) analysis, which studies the Electrical Cord Reels's industry coverage, current market competitive status, and market outlook and forecast by 2025. Global “Hydroxyapatite (HAp) 2020-2025” Research Report categorizes the global Hydroxyapatite (HAp) by key players, product type, applications and regions,etc. The report also covers the latest industry data, key players analysis, market share, growth rate, opportunities
08-28-2020 | Business, Economy, Finances, B …
Orion Market Reports
Hydroxyapatite Hap Market, Industry Share, Trends, Growth, Future Prospects, For …
The Hydroxyapatite (HAp) market is expected to grow by 6.5% CAGR from 2019 to 2025, growing from $2.2 billion in 2019 to $3.1 billion in 2025. Hydroxyapatite (HAp) is a mineral present in the bones and hard tissues of humans and animals. The micro-sized hydroxyapatite (HAp) can be designed using nanotechnology applicable to orthopedic surgery and drug delivery systems. It is mainly used for various bone graft methods, and is also
08-24-2020 | Health & Medicine
HTF Market Intelligence Consulting Pvt. Ltd
Hospital Acquired Pneumonia (HAP) - Pipeline Review, H2 2020 | EnBiotix, Helperb …
The Hospital Acquired Pneumonia (HAP) - Pipeline Market to witnessed good recovery in growth post first half of 2020 and is projected coverup market sizing during the forecast period (2021-2026). The assessment provides a 360° view and insights - outlining the key outcomes of the Hospital Acquired Pneumonia (HAP) - Pipeline market, current scenario analysis that highlights slowdown aims to provide unique strategies and solutions following and benchmarking key players
01-17-2019 | Business, Economy, Finances, B …
ResearchStore.biz
Global Hydroxyapatite (HAp) Market to Grow at a CAGR over 6.11% from 2018 to 202 …
Researchstore.biz launched a study titled “Global Hydroxyapatite (HAp) Market by Type (Nano-Sized, Micro-Sized, Greater than Micrometers), Application (Orthopedic, Dental Care, Plastic Surgery), Region (North America, Europe, Asia Pacific, South America and Middle East and Africa)” and Global Forecast 2018-2025. The global hydroxyapatite (HAp) market is expected to grow from USD 2.16 Billion in 2017 to USD 3.47 Billion by 2025 at a CAGR of 6.12% during the forecast period from 2018-2025.
01-14-2019 | Business, Economy, Finances, B …
Apex Market Reports
Global Hospital-Acquired Pneumonia (HAP) Drugs Market 2019 - Teva Pharmaceutical …
HAP is a type of pneumonia that is caused after 48 hours of hospitalization. HAP is one of the major challenges faced by the public healthcare system today. The disease is the second most common type of hospital-acquired infections. Pneumonia is an inflammatory condition of lungs and mainly affects the microscopic air sacs called alveoli. This is primarily caused by infection by bacteria or viruses and sometimes with other microorganisms.
05-30-2017 | Health & Medicine
Orbis Research
Global Hospital-acquired Pneumonia (HAP) Drugs Market Outlook 2017-2021
The study of Hospital-acquired Pneumonia (HAP) Drugs Market in UK 2017-2021 industry is very important to enhance business productivity and for the study of market forecast. This New Report presented by Orbis Reseach contains a comprehensive market and vendor landscape in addition to a SWOT analysis of the key vendors. Hospital-acquired Pneumonia (HAP) Drugs is a type of pneumonia that is caused after 48 hours of hospitalization. HAP is one of
Comments about openPR
OpenPR is clearly structured and remains true to its principle of confining itself to the essential parts. OpenPR has proven to be a very good and reliable partner to our media agency: Within the shortest time the releases are online and go down well with the media representatives. The success of OpenPR is reflected in the steadily increasing number of press releases. It is good that OpenPR exists!
Ursula Koslik, Director Marketing & PR, F+W Hamburg