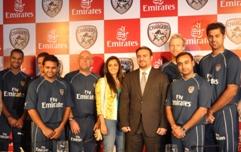 HYDERABAD, March 28, 2012: Deccan Chargers today announced that Emirates, the international airline which serves India with 185 weekly flights, will be Team Sponsor for their season, starting 7th April.Emirates will be supporting the Hyderabad-based team for an initial period of three years and will be with them for their opening Indian Premier League (IPL) match against the Chennai Superkings in Vizag. Ms Gayatri Reddy, co-owner of the Deccan Chargers, and Venkatram Reddy, COO, were joined by Orhan Abbas, Emirates’ Vice President India and Nepal, at a press conference in Hyderabad to finalise the agreement. “We are proud to have a leading global brand like Emirates as our Team Sponsor for the next three seasons of the IPL,” said Ms Gayatri Reddy. “We are confident this association with Emirates will be fruitful. With an exciting new squad and sponsor, we look forward to the tournament and repeating our winning performance in DLF IPL 2012.” “We are honoured to be joining forces with the Deccan Chargers and partnering with the team for the next three IPL campaigns,” said Orhan Abbas. “India is a vital market for Emirates and we recognise the huge role it has played in our development, from the employees who make up almost 25% our workforce to the millions of Indian passengers who book with us every year. “Through this sponsorship we have the chance to connect with the people who we connect to 122 destinations and show our ongoing commitment to a nation which Emirates has been serving since we began operating in 1985,” added Orhan Abbas. “It is also a tremendous opportunity for us to further strengthen our support of a sport which the people of India follow with renowned passion.” The Deccan Chargers – whose home games will be played at Vizag, Cuttack and Hyderabad - will feature a host of household names in 2012, including Sri Lanka’s Kumar Sangakkara, who will captain the side, South African stars JP Duminy and Dale Steyn, as well as Indian wicketkeeper/batsman Parthiv Patel. The press conference in Hyderabad – which Emirates has been operating to since 2001 - was also attended by vice-captain Cameron White, head coach Darren Lehmann and their fellow Australian Daniel Harris, as well as Indian stars Patel, Shikhar Dhawan, Amit Mishra and Manpreet Gony, who had the honour of unveiling the 2012 home kit.As Team Sponsor, Emirates will enjoy a range of rights and entitlements to display their official logo on platforms that include the team’s apparel, in stadia branding, for premium hospitality and match tickets, official merchandise and access to the Deccan Chargers playersAbout Deccan Chargers Deccan Chargers(www.deccanchargers.com) is a unit of Deccan Chronicle Holdings Limited (www.deccan.com), which owns the IPL cricket team from Hyderabad. Deccan Chronicle is a No 1 English Daily in South India.The owners and their families are equally passionate about the game of cricket as are the Deccan Chargers fans, and extend their whole hearted support and encouragement to the team. Deccan Chargers have been the Champions of IPL 2009 which was played in South Africa and Semi-finalists of IPL 2010.About Emirates and India Emirates (www.emirates.com/in), one of the fastest growing international airlines, connects 10 destinations in India to its global network with 185 weekly flights. The airline reported a net profit of USD$1.6 billion for the 2010/11 fiscal year. It operates 171 wide-body Airbus and Boeing aircraft and has orders for an additional 232 aircraft, worth more than USD$84billion. Emirates has been serving India since it began operating in 1985 and stimulates trade between the country and points across its network of 122 destinations by carrying more than 3000 tonnes of cargo each week in the belly-hold of passenger aircraft. In addition, Emirates operates one weekly scheduled freighter to Chennai, a Boeing 777F with a capacity of 103 tonnes. The airline also has an impressive sponsorship portfolio in India with a notable interest in cricket through its association with the Deccan Chargers, while in golf it is the Official Airline of the Avantha Masters. About Emirates’ Commitment to Cricket Emirates’ ICC Official Partner status gives the airline sponsorship rights to all ICC major tournaments, including the ICC Cricket World Cup, ICC Champions Trophy and ICC World Twenty20, which in 2012 will be staged in Sri Lanka. It also sponsors the ICC Cricket World Cup Qualifier, ICC Under-19 World Cup, ICC Intercontinental Cup and the ICC Women’s World Cup.In partnership with the ICC, Emirates sponsors the Emirates Elite Panel of ICC Umpires and Referees, an agreement which sees the Fly Emirates logo prominently displayed on the umpires’ clothing at all ICC events.In addition, Emirates is the Team Sponsor of Deccan Chargers and will be supporting the Hyderabad club in the IPL until 2014.Emirates also supports English County side Durham as the shirt sponsor of its Twenty20 side, while it also has naming rights to the club’s stadium, the Emirates Durham International Cricket Ground. Emirates sponsors domestic cricket in Pakistan and is involved with a number of tournaments, including the Quaid-e-Azam Trophy 2011-12, Pentagular Cricket Cup 2011-12, OneDay Cricket Cup 2011-12 and Super 8 T20 Cricket Cup 2012.Emirates is also a sponsor of the UK charity Lord’s Taverners and – in partnership with the Arabian Cricket Challenge - it is the title sponsor of the Emirates Airline Twenty20, Emirates Airline Forty40 and the Emirates Airline ARCH Trophy, which is contested by schools.Concept Public Relations India Limited 11-4-641/A,First Floor | Lane Opp:PTI Building | AC Guards | Hyderabad 500004 O: 040 23398647 | F: 040 23302834 I