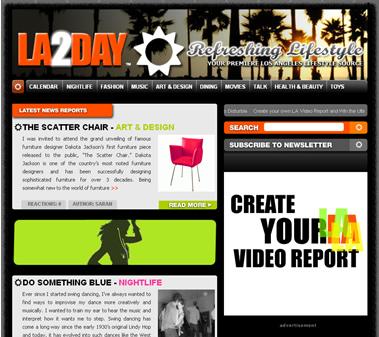 LA2DAY, the rapidly expanding LA online magazine announces the addition of seven new writers to its outspoken team of experts and enthusiasts that report on events and culture from an insider’s perspective.

Popular LA insider magazine LA2DAY (la2day.com) announced today that it has added seven new Los Angeles insider reporters to provide readers with an even broader, yet more in-depth look at the City of Angels as it exists behind its commercialized exterior. Tim Verbeek, CEO and founder of LA2DAY says that the majority of the seven new writers are chefs of various specialties that will cover a variety of LA-specific, food-related topics including wine, farmer’s markets, white table cloth reviews, nutrition, LA style recipes, teas, and young mom’s night out hotspots. “LA is a town rich with fascinating perspectives and we’re dedicated to reflecting that in the magazine through a broad base of writers from all walks of life,” explains Verbeek. Cuisine is just one of the many topics this magazine-sophisticated and internet-convenient Los Angeles magazine covers. The entire staff of writers is composed of Angeleno personalities with an eclectic range of expertise. The team covers LA’s music scene from the industrial bands like Skinny Puppy to Opera, fashion trends from the club scene to the runway, and nightlife from slam poetry to Porgy and Bess. Though the spectrum of topics is diverse, what ties these pieces together and binds them under the LA2DAY brand, is the edgy, opinionated first person perspective on various events around Los Angeles, not seen through the eyes of starry-eyed tourists, but from those who call the city home. Verbeek says that the 30+ person editorial team allows the magazine to report from inside the story. Reporters from the rapidly growing publication seems to be everywhere where culture is impacting the city, from backstage with the band Idlewild, to the launch of Dakota Jackson’s trendy furniture line, to the interview table with the CEO of the premium vodka company Ketel One where the secret of the vodka making family’s success is revealed. With the addition of the seven culinary reporters, LA2DAY has launched a new feature that allows readers to interact with the team by submitting restaurants for review by culinary experts. The most recent review of the Beverly Hills Chaya goes inside the family restaurant that originated in Japan more than 350 years ago. In his review, culinary reporter Aidan Kelly goes beyond the impact of Chaya on the palate, but its impact on Los Angeles culture. “We’re pleased to welcome our seven newest members to our editorial team and are excited about the fresh perspectives they will provide our readers,” says Verbeek. “LA2DAY has a lot of exciting things in store. Readers can expect to be surprised and engaged at every turn.” About LA2DAY: LA2DAY (http://www.la2day.com) is an alternative online lifestyle magazine dedicated to providing Angelenos with insightful and provocative content. The 30 person editorial staff reports on the vibrant, energetic city thriving beneath the city’s meticulously maintained surface. Press Contact Marlon Ray www.la2day.com marlon@la2day.com 310-247-9610 360 S. Rexford Dr. Suite 12 Beverly Hills, CA 90212