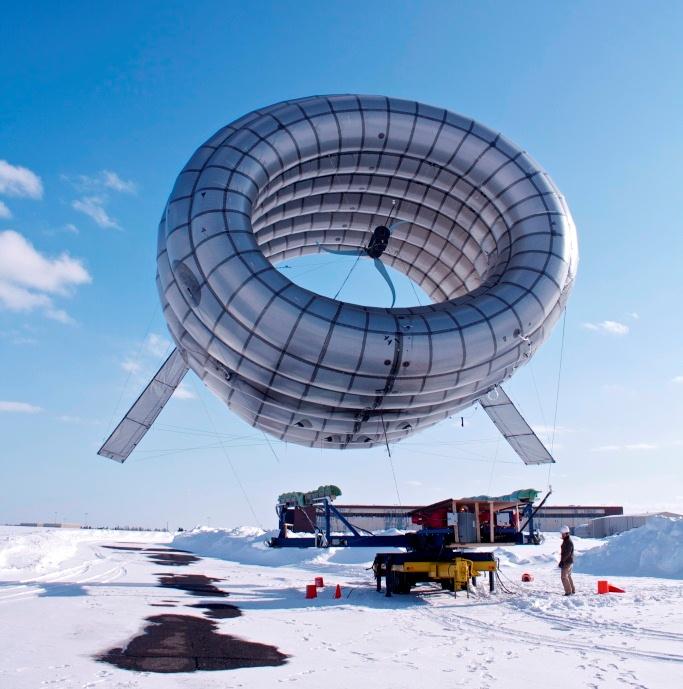 Altaeros Energies, a wind energy company formed out of MIT, announced today that it has demonstrated high altitude power production from an automated prototype of its airborne wind turbine.The company recently completed testing of a 35-foot scale prototype of the Altaeros Airborne Wind Turbine (AWT) at the Loring Commerce Center in Limestone, Maine. The prototype, fabricated in partnership with Doyle Sailmakers of Salem, Massachusetts, achieved several key milestones. The AWT climbed up 350 feet high, produced power at altitude, and landed in an automated cycle. In addition, the prototype lifted the top-selling Southwest Skystream turbine to produce over twice the power at high altitude than generated at conventional tower height. The turbine was successfully transported and deployed into the air from a towable docking trailer.Altaeros is developing its first product to reduce energy costs by up to 65 percent by harnessing the stronger winds found over 1,000 feet high and reducing installation time from weeks to days. In addition, it is designed to have virtually no environmental or noise impact and to require minimal maintenance. The Altaeros AWT will displace expensive fuel used to power diesel generators at remote industrial, military, and village sites. In the long term, Altaeros plans to scale up the technology to reduce costs in the offshore wind market.“For decades, wind turbines have required cranes and huge towers to lift a few hundred feet off the ground where winds can be slow and gusty,” explained Ben Glass, the inventor of the AWT and Altaeros Chief Executive Officer. “We are excited to demonstrate that modern inflatable materials can lift wind turbines into more powerful winds almost everywhere—with a platform that is cost competitive and easy to setup from a shipping container.”The AWT uses a helium-filled, inflatable shell to ascend to higher altitudes where winds are more consistent and over five times stronger than those reached by traditional tower-mounted turbines. Strong tethers hold the AWT steady and send electricity down to the ground.The lifting technology is adapted from aerostats, industrial cousins of passenger blimps that for decades have lifted heavy communications and radar equipment into the air for long periods of time. Aerostats are rated to survive hurricane-level winds and have safety features that ensure a slow descent to the ground.The emerging airborne or “high altitude” wind sector was recently featured on the cover of the March 2011 issue of Popular Mechanics. In December 2011, the Federal Aviation Administration (FAA) released draft guidelines allowing the new class of airborne wind systems to be sited under existing regulation. Altaeros Energies is currently seeking partners to join its effort to launch the first commercially-available high altitude wind turbine in the world.Altaeros Energies was founded in 2010 to generate low cost renewable energy by harnessing the strong winds found at higher altitudes. Altaeros Energies won the 2011 ConocoPhillips Energy Prize, and has received funding from the U.S. Department of Agriculture, the California Energy Commission, and the Maine Technology Institute. To learn more, please visit www.altaerosenergies.com or contact:Adam Rein +1 857.244.1560 info@altaerosenergies.com337 Summer St Boston, MA 02210