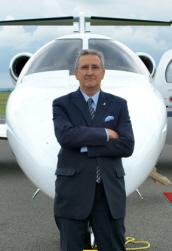 Dick Gilbert, Chairman of BACA (Baltic Air Charter Association) for the past three years, has been re-elected for another year.BACA, established in 1949, is the world’s largest network for the air charter market and members include air charter brokers, airports, airlines, business aircraft operators, handling agents, aviation lawyers and consultants. It offers training and networking opportunities for members, as well as annual awards, and liaises with aviation and government bodies on matters of concern and interest to its members. Mr Gilbert says BACA has reached record membership, including a growing number of members based outside the UK and Europe. “We continue to attract a wide range of companies and organisations as we all seek to maintain the highest standards in the air charter industry.”Now retired, Mr Gilbert has been in the aviation business since 1965. He founded charter broker Skyline Aviation Ltd in 1991 after leaving his position as Commercial Manager of Anglo Cargo Airlines, a worldwide jet cargo airline operating from London Gatwick Airport. Prior to that, he was Commercial Superintendent for Air Bridge Carriers (later re-named Hunting Cargo Airlines) at East Midlands Airport.endsBACA, with its official maxim “Our Word Our Bond,” is the widely respected and known as the world's largest and most prestigious network for aircharter professionals. BACA represents the interests of commercial aviation companies particularly in the aircharter industries and markets. Current membership includes some 125 companies, which represent numerous airbrokers, charter airlines, airports, business aircraft operators, freight forwarders, consultants and others. BACA’s principal objective is to promote integrity and ethical business practices so members can deal with each other with confidence, regardless where they're based or whether they have met each other before. BACA is the successor of the Airbrokers' Association founded by members of the Baltic Mercantile and Shipping Exchange in March 1949. Its purpose was to bring to aircraft chartering the same standards of integrity and professionalism for which the Baltic Exchange and the Institute of Chartered Shipbrokers had, for so long, been known and respected. BACA council members are always available for commentary and interviews BACA is headquartered at the Baltic Exchange at 38 St. Mary Axe in London. More information can be found on its web site: www.baca.org.ukImage Line Communications 1a Zetland House 5-25 Scrutton Street London EC2A 4HJ

02-07-2013 | Logistics & Transport
BACA
Aviation charity to benefit from BACA fund-raising
Baltic Air Charter Association (BACA) has chosen MAF, a humanitarian organisation operating more than 135 light aircraft across 30 countries in the developing world, as its designated charity for 2013. “As an association representing companies involved in the air charter market, we thought it was especially appropriate to raise funds for an aviation charity this year,” says BACA Chief Executive Markham Jackson. MAF UK, which was founded by Air Force personnel
03-23-2012 | Business, Economy, Finances, B …
BACA
BACA condemns rise in Air Passenger Duty Tax
The increase in Air Passenger Duty (APD) tax is bad for the airline industry and bad for the UK economy, says the Baltic Air Charter Association (BACA). The group, which represents almost 200 companies in the air charter and business aviation industry, has added its voice to the growing condemnation of the increase in the Air Passenger Duty tax due to come into force on 1 April, 2012. “The UK passenger taxes
02-27-2012 | Leisure, Entertainment, Miscel …
BACA
New Council Member for BACA
Adam Twidell from PrivateFly.com, an online booking network for private jet and helicopter charter, and an ex-RAF pilot, has been appointed to the BACA (Baltic Air Charter Association) Council. BACA is the world’s largest association for the air charter industry and offers training and networking opportunities for a wide range of members involved in commercial aviation. -ends- NOTES TO EDITORS: BACA, with its official maxim “Our Word Our Bond,”
04-28-2008 | Logistics & Transport
BACA
BACA Announces 2008 Annual Excellence Award Winners
LONDON, 28 April 2008 – The Baltic Air Charter Association (BACA), the world\'s largest and most prestigious network for aircharter professionals, is pleased to release the names of this year’s 2008 Annual Excellence Awards winners. This year’s recipients were celebrated at BACA’s annual luncheon, held yesterday at Plaisterer’s Hall in London. The 2008 winners are as follows: Best Passenger Charter Airline: Titan Airways Best