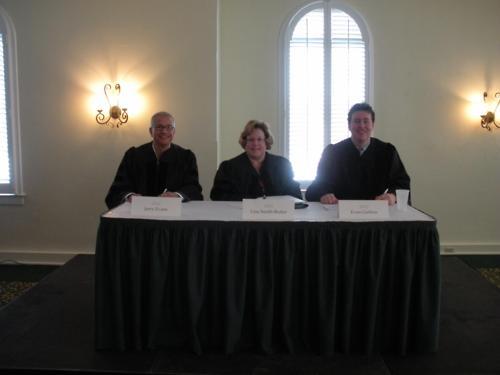 Attorney Evan Guthrie of the Evan Guthrie Law Firm in Charleston, South Carolina helped judge the CSOL National Moot Court Competition in Charleston, SC on Friday February 3rd 2012. The National Moot Court Contest invited law students in law schools from across the country to participate in arguing a case in front of judges. Attorney Evan Guthrie participated as a judge on the Supreme Court Of The United States during the competition. The case being argued in the competition was similar to a recent case decided before the Supreme Court involving police surveillance and Fourth Amendment issues when law enforcement places a global positioning satellite or GPS device tracker on a suspect’s car to track movements without the knowledge of the suspect. One group of two law students from a school had to argue each side and had to be prepared to argue either side during the contest. Attorney Guthrie and the other judges were able to interrupt the law students at any time during their oral arguments to ask difficult questions about the case and test their knowledge. The contest proceeded in a tournament manner until a team from Florida State won in the finals. All of the law students performed well and Mr. Guthrie found it difficult to score the participants as all the performances were so good. Attorney Guthrie enjoyed being able to be a judge for the day and participate in the competition. Mr. Guthrie liked the change of pace and being able to be on the other side of the judge’s bench and being able to ask the questions.Evan Guthrie Law Firm is licensed to practice law throughout the state of South Carolina. The Evan Guthrie Law Firm practices in the areas of estate planning probate wills living trust special needs trusts personal injury accident and divorce and family law. For further information visit his website at http://www.ekglaw.com . Follow on Twitter http://twitter.com/ekglaw Like on Facebook http://www.facebook.com/ekglaw . Avvo http://www.avvo.com/attorneys/29401-sc-evan-guthrie-3562169.html LinkedIn http://www.linkedin.com/company/2526866 Google + https://plus.google.com/107399604138666247588/about Evan Guthrie Law Firm 164 Market Street Suite 362 Charleston SC 29401 843-926-3813Evan Guthrie Law Firm 164 Market Street Suite 362 Charleston SC 29401 843-926-3813