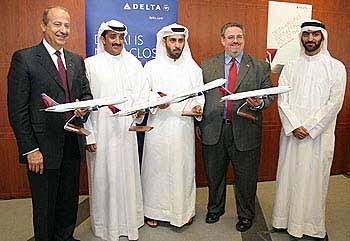 Delta to launch direct flights from Dubai to the US

DUBAI, May 31, 2007 – Delta Air Lines - America’s fastest growing international airline – will touch down at Dubai International Airport tomorrow (01/06/07) evening with its first nonstop flight between Dubai and Atlanta, the world’s largest single airline hub. Delta is the only US airline to operate between Dubai and the United States, offering five weekly services from Dubai with hundreds of onward connecting opportunities offered via Delta’s Atlanta hub. “We are excited to expand our global reach. This new route to Dubai will not only serve to increase commerce and tourism between the Gulf and the United States, but will also provide our customers with convenient connections throughout the U.S., Canada, Latin America and the Caribbean,” said Tony Charaf, Delta’s Senior Vice President Technical Operations at a press conference in Dubai ahead of the flight’s arrival. “Our new service will mean greater travel options for UAE business and leisure passengers flying beyond Atlanta along with providing multiple opportunities for freight forwarders and cargo shippers. Delta is the only carrier to serve all 50 U.S. states, and passengers can fly on to around 190 destinations including Los Angeles, Dallas, Washington and Orlando as well as international destinations such as Mexico City, Bermuda and Caracas (Venezuela).”Commenting on the news of the new flight, Paul Sutphin, the United States Consul General in Dubai, said “We are very enthusiastic about Delta’s new service. With over 500 US companies registered in Dubai and more than 26,000 US citizens living in the UAE, we are confident that this non-stop link to one of the America’s most dynamic commercial centres – as well as one of its most important travel hubs – will boost trade and tourism between the US and UAE.”Mohammed Khamis bin Hareb, Executive Director, Operations and Marketing for the Department of Tourism and Commerce Marketing, said “The growth in trade and tourism between the two countries is extremely healthy. Trade between the US and the UAE reached almost US$12 billion last year. Over the past 10 years the number of US visitors to Dubai per year has multiplied by 10 times. During the same period the number of US companies in Jebel Ali Free Zone has doubled to 227 and the whole world knows about Halliburton’s decision to open a head office here.”Delta will operate the new service using Boeing 777-200ER aircraft seating up to 268 passengers and featuring Delta’s refurbished business and economy class service. Customers can enjoy Delta’s award-winning BusinessElite service featuring all-leather sleeper seats with 152 cm of legroom, a 2x2x2 configuration which means there is never a middle seat, innovative food offerings designed by celebrity chef Michelle Bernstein, on-demand personal in-seat entertainment boasting more than 20 first-run and popular classic movies, a variety of TV programmes, a broad range of music, and a suite of 12 video games. Economy class customers also will benefit from new all-leather economy seats, amenity kits and enhanced food offerings. All flights will have Arabic speaking flight attendants on-board. Due to time differences when travelling westwards, travellers can take off from Dubai at 10.45pm in the evening and reach anywhere in North America the following day, including Hawaii in time for tea. Describing Delta’s arrival in Dubai as a continuation of historical ties, Jamal Al Hai, Chairman, Executive Board of Dubai Department of Civil Aviation, said: “The service will translate into greater convenience and flexibility for the thousands of Americans who travel between the two countries each year including many US expatriates who consider the UAE their second home. According to current statistics, almost half a million people travelling to the US fly through or from Dubai and this number is expected to rise over the coming years. For an airline operating from destinations in the US, Dubai provides an opportunity to tap into a regional market of 2 million passengers annually.” Delta’s general sales agent (GSA) in the United Arab Emirates and Oman is Sharaf Travel. Salah Ibrahim Sharaf, Chairman of Sharaf Travel said: “Dubai, like Atlanta, is a major aviation hub and the linking of these cities will create dynamic opportunities.” Delta’s Dubai service is one of five new transatlantic routes to be launched this summer, strengthening Delta’s presence as a leading carrier across the Atlantic. The flight is an integral part of the airline’s strategy of international growth to offer more non-stop departures to more destinations worldwide that will see Delta strengthen its presence as the leading carrier across the Atlantic.About Delta Delta Air Lines (NYSE: DAL) offers customers service to more destinations than any global airline with Delta and Delta Connection carrier service to 311 destinations in 52 countries. With more than 60 new international routes added in the last year, Delta is adding international flights at a faster rate than any other major U.S. airline and is a leader across the Atlantic with flights to 32 trans-Atlantic destinations. To Latin America and the Caribbean, Delta offers more than 600 weekly flights to 58 destinations. Delta's marketing alliances also allow customers to earn and redeem SkyMiles on nearly 15,000 flights offered by SkyTeam and other partners. Delta is a founding member of SkyTeam, a global airline alliance that provides customers with extensive worldwide destinations, flights and services. Including its SkyTeam and worldwide codeshare partners, Delta offers flights to 462 worldwide destinations in 98 countries. Customers can check in for flights, print boarding passes and check flight status at delta.com.For further information, please contact: Jack Pearce / Philippa Daniels Matrix PR, Dubai PB #54250 T: 009714-3430888 F:009714-3432226 E: jack@matrixdubai.com/philippa@matrixdubai.com W: www.matrixdubai.com

12-18-2020 | Politics, Law & Society
Fotis International Law Firm
Corporate Lawyers in Dubai
Fotis International Law Firm (the Firm) has successfully extended their operations to all the Emirates in the United Arab Emirates, after much demand and requests from clients. The Firm caters to the legal requirements of clients from across the globe on various legal and corporate matters. With dominant presence in the Middle Eastern region, the Firm is home to lawyers, legal counsels, dedicated researchers and consultants from over fifteen (15)
03-04-2019 | Health & Medicine
Dr. Schumacher GmbH
Resounding success in Dubai
Dubai/Malsfeld – Dr. Schumacher GmbH has been a regular guest at Arab Health for more than a decade now. With over 4,150 exhibitors, the international event, held this year from 28th to 31st January in Dubai, is one of the world’s largest health trade fairs. This year, Dr. Schumacher GmbH managed to improve on the success of previous years yet again and welcomed a wide variety of trade fair visitors
12-05-2018 | Media & Telecommunications
Evops Marketing & PR
Dubai Tourism Inaugurates HITEC® Dubai 2018
HITEC Dubai 2018, the Middle East’s largest hospitality technology exhibition and conference, was officially inaugurated today by Issam Kazim, CEO, Dubai Corporation for Tourism and Commerce Marketing (DCTCM). Co-produced by Hospitality Financial and Technology Professionals (HFTP®) and Naseba, this year’s expo, which is taking place at the Madinat Jumeirah Dubai from 5-6 December, is showcasing a wide range of innovative solutions from the world’s leading hospitality technology providers. Travel technology has
11-19-2018 | Media & Telecommunications
Evops Marketing & PR
Dubai Tourism to Inaugurate ‘HITEC Dubai 2018’
HITEC Dubai 2018, the Middle East’s largest hospitality technology exhibition and conference, will be inaugurated by Dubai Tourism on 5th December 2018. The annual business-to-business (B2B) exhibition will give Middle East buyers, currently worth over USD 75 billion, access to the world’s leading technology solution providers and experts in the hospitality sector. Commenting on the critical role technology is playing in driving tourism, Issam Kazim, CEO, Corporation for Tourism and Commerce
02-19-2018 | Business, Economy, Finances, B …
Vinsys IT services (I) PVT LTD
PMP Dubai - PMP Training Dubai – Vinsys
PMP Training at Dubai By Vinsys. Register Now for The PMP Dubai Class Led by Highly Qualified and Certified Subject Matter Expert. Widely accepted as a global benchmark to recognize proficiency and skills in Project Management, the Project Management Professional (PMP Dubai) certification will certify an individual’s ability to successfully drive and manage a project. PMI’s Project Management Professional (PMP®) credential is recognized worldwide as the definitive industry-recognized certification for project
09-28-2016 | Science & Education
Web Design Dubai
Web Design Dubai
Fascinating web interfaces will definitely surprise people when they visit your website. An amazing Website design plus development is a combination of both art and science. A successful website design will definitely offers an appealing look and feel to attract your visitors but at the same time it also be capable of delivering what it needs to. Webarro is located in Dubai with capabilities to provide services like web development,
Comments about openPR
OpenPR ist the nicest and most clearly laid out PR platform I have seen to this day. The press releases are displayed very nicely and clearly and without any unnecessary frills. The updates are fast and the finished release looks appealing and is clearly legible. Even with 16 years of experience one discovers new things from time to time. Congratulations!
Gabriele Ketterl, Director Marketing & PR, Menads