Press release from: Code One GmbH 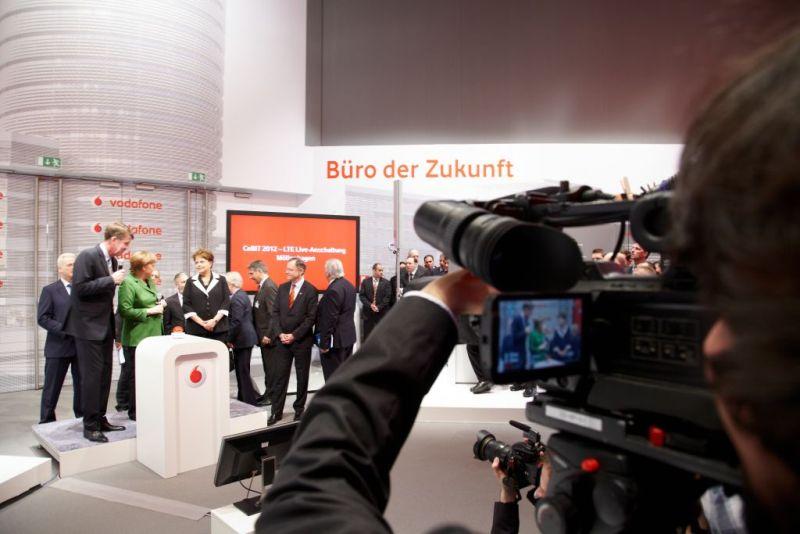 Mobile LTE live streaming realized with innovative Code One transmission technology Hannover, March 6, 2012: Kicking off the CeBIT Chancellor Angela Merkel and Vodafone Head Fritz Joussen bring the LTE high-speed network to their East German home region. With the help of the Code One Backpack Kit (http://codeone.tv/produkte/index-en.php ),the brand new LTE cell in the small town of Möllenhagen was put into operation by the Chancellor herself.Code One (http://codeone.tv/startseite/index-en.php?lang=en ), specialized in video transmission through mobile phone networks, transmitted an HD quality video stream of Merkel to her Bundestag colleague Eckhardt Rehberg in the Müritz region. Here Code One used technology developed by the company itself, streaming over bundled networks such as LTE, DSL and UMTS. Their mobile units are equipped with the newest and fastest 4G/LTE modules and made the CeBIT live stream possible with 6 MBit/s HD-quality. The special Code One bundling technology theoretically makes transmission rates of up to 100 MBit/s achievable. „Through LTE as ‘data transmission of the fourth generation’, the system solutions developed by Code One open up unimagined possibilities. With fast broadband Internet, ultra mobile HD broadcasting und 3D HD in real time is no longer a vision of the future. Which we proved with the CeBIT transmission over the LTE mobile phone network“, says Zlatko Kauric, one of the three founders and managing directors of Code One GmbH.Code One GmbH was founded in February 2010 and is a owner-led company based in Düsseldorf. The company produces innovative video transmission technology for broadcasting, web streaming and industry applications in Germany.Code One is an internationally active company focused on mobile live video streaming. All of their products are made in Germany by the in-house Development Department. Distributors around Europe support the international business.The team of 20 people has hardware and software for sale. In addition, their portfolio includes services for production and streaming requiring complex solutions – whether for television, the Internet or other mobile terminals.Code One GmbH Julia Klein Koenigsberger Str. 1 40231 Düsseldorf Tel: +49 211 63556230 Mail: presse@codeone.tv