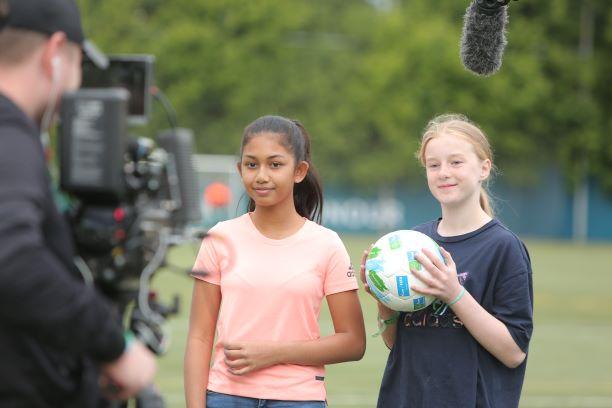 (Moscow/Berlin - September 15, 2020) The International Young Commentators Competition for children 9-14 years old will be held on September 15 - November 15, 2020 on Facebook, Instagram, and YouTube. The jury will include Yazn Taha, the 12-year-old journalist, who holds the title of the world's youngest football commentator.Children from all countries and regions of the world are invited to make a video in which they comment in English on a 1-minute segment of the match (VIDEO), without editing, and post the video on social networks with the hashtag #F4FCommentator indicating their age and country of residence.The Competition will have two stages: Stage I – selecting the best Young Commentator in each country (dates: September 15 – October 15, 2020)Stage II – choosing the winner of the Competition by online vote (dates: October 15 – November 9, 2020)The results of the competition will be announced on November 10 – November 15, 2020.Participants of the Competition will receive valuable prizes from the International Children's Social Programme Football for Friendship: a set of professional streaming audio-video equipment and souvenirs with the symbols of the project. The participation of Yazn Taha in the jury this year is symbolic for Football for Friendship. It serves as an excellent example and great motivation for all the participants of the Competition. In 2018, Yazn took part in the final events of the Sixth Season in Moscow. It was the first time he commented in English on the Football for Friendship World Championship Final, before he did so only in Arabic. At the same time, Yazn and over 2 000 participants of the programme attended the opening match of the 2018 World Cup, Russia - Saudi Arabia. For the key events of the Seventh Season in Madrid, Yazn had learned Spanish.“I started playing football at the age of 5, which is also when I commented on my first match: Barcelona - Real Madrid. I know it sounds incredible, but it happened on its own. I really like not only to comment on matches, but also to play football. Trying myself in the new format of the Football for Friendship programme and taking part in the online game that will be released in November is a great opportunity. I look forward to the release to invite all my friends to join me and meet everyone on the virtual football pitch,” shared Yazn Taha.Programme’s official internet resources: Photo and video materials for media: http://media.footballforfriendship.com Website: https://www.gazprom-football.com/football-for-friendship/ Instagram: https://www.instagram.com/footballforfriendship/ Facebook: https://www.facebook.com/FootballForFriendship/ YouTube: https://www.youtube.com/user/FOOTBALL4FRIENDSHIP Wikipedia: https://en.wikipedia.org/wiki/Football_for_Friendship Twitter: https://twitter.com/f4fprogrammeClient Contact: AGT Communications Agency / International Press Center Football for Friendship Victoria Elesina Maroseyka str. 3/13 101990 Moscow (Russian Federation) T: +7 (495) 624 03 01 F: +7 (495) 621 00 60 http://www.gazprom-football.com Global_press@footballforfriendship.com Press Contact: KaiserCommunication GmbH Alexandra Ogneva Postfach 61 03 65 10926 Berlin (Germany) +49 (0) 30 845 20 00 0 http://www.kaisercommunication.de/ ogneva@kaisercommunication.deAbout the programme: The International Children’s Social Programme Football for Friendship is implemented by Gazprom since 2013. Over the previous seven seasons, the programme has united over 6 000 participants from 211 countries and regions and over 5 000 000 supporters.Young Players and Young Journalists are the participants of the programme – boys and girls aged 12 including children with disabilities. Young Players represent different countries and cultures united in the mixed teams. They show that nationality, gender, and physical abilities aren’t a barrier to becoming a team. Young Journalists cover the events of the programme in the International Children’s Press Center. All participants become Young Ambassadors of the programme and continue to share their Football for Friendship experience and promote universal human values: friendship, equality, fairness, health, peace, devotion, victory, traditions, and honour.UEFA, FIFA, football federations and the world’s leading football clubs, international charity foundations, famous athletes, politicians, and artists support Football for Friendship. The project has received multiple national and international awards in the field of social responsibility, sports, and communications, including the world record for the most nationalities in a football training session in history.In 2020, Football for Friendship will be held in the online format. A special digital platform will unite over 10 000 players of all ages. It will become the home for international children’s competitions and a playground where anyone will be able to train, join into the international mixed teams and play their favourite game in the Football for Friendship format without leaving the comfort of their home.

11-12-2020 | Health & Medicine
Young Innovations Europe
Young Innovations takes over Astek
Heidelberg/Germany, November 11, 2020 – The American dental group Young Innovations has acquired the leading British dental manufacturer Astek and is now taking over the distribution of the product range. The medical portfolio of Astek Innovations includes well-known brands such as Pro-Matrix®, Pro-Tip®, Transform, Pegasus, inSafe, and Alma Prosthetic Instruments. Currently, the hygienic disposable products from Astek are in particular demand because they help to control infection risks. For example, the
03-01-2013 | Arts & Culture
PrimaDonna Productions, Inc.
Keeping Ron "Forever Young"
"Uncle Ronny is a living legend of Texas music," says artrepreneur Nikki Young of her uncle, Ron Young. "And we want him to stay that way - a *living* legend - for as long as possible." In that spirit, nearly 300 of Ron Young's family, friends, and fans packed Sam's Burger Joint on Sunday, February 17 for "Forever Young," an all-day benefit for the singer/songwriter, who was diagnosed with an
08-27-2010 | Science & Education
Young and Young Attorneys at Law
Indianapolis Personal Injury Attorneys Young and Young University Scholarship En …
Indianapolis, IN August 25, 2010 --- Young and Young one of the leading consumer personal injury law firms in Indianapolis, has announced scholarship endowments for 2 Hoosier Universities. Two scholarships are either fully endowed or in the process of being fully endowed at Marian University, Indianapolis, in the name of our Father Howard S. Young, Jr., and our Mother Mary A. Young. Both attorneys dedicated their professional
08-03-2010 | Politics, Law & Society
Jackson Walker LLP
Jackson Walker Welcomes Randel Young
HOUSTON – Jackson Walker is pleased to welcome partner Randel Young to the firm’s Houston office. Mr. Young has almost 30 years’ experience in the energy, natural resource and electric power and related service sectors, with an emphasis on structuring, negotiating and documenting oil and gas, natural resource and other projects and transactions. Mr. Young’s practice is focused on U.S. and international project development and project finance transactions, U.S. and
06-15-2010 | Politics, Law & Society
Young and Young
Indianapolis Personal Injury Attorneys Young and Young Launch New Website
Indianapolis, IN June 15, 2010 --- Young and Young one of the leading consumer personal injury law firms in Indianapolis, has announced the launch of its new consumer-friendly personal injury website this week—youngandyoungin.com. The new website is designed to help Indiana citizens learn about personal injuries, automobile and motorcycle accidents, construction site injuries, medical malpractice, and social security disability claims process, and understand the rights and protections
09-04-2006 | Science & Education
Young Germany
Young Germany launches 'Deutsch@YG'
Introductory German-language offering on young-germany.de – the Germany website for high potentials. Young Germany (YG), the website for international high potentials, has launched its German-language section „Deutsch@YG“(www.young-germany.de/deutsch.html) to establish a sixth category in its online editorial offering. Deutsch@YG serves as an interactive and multimedial introduction to the German language. The website will use the English-language content in the existing categories „Career & Education“, „Business & Innovation“, „Lifestyle & Society“ and „Living in
Comments about openPR
OpenPR is clearly structured and remains true to its principle of confining itself to the essential parts. OpenPR has proven to be a very good and reliable partner to our media agency: Within the shortest time the releases are online and go down well with the media representatives. The success of OpenPR is reflected in the steadily increasing number of press releases. It is good that OpenPR exists!
Ursula Koslik, Director Marketing & PR, F+W Hamburg