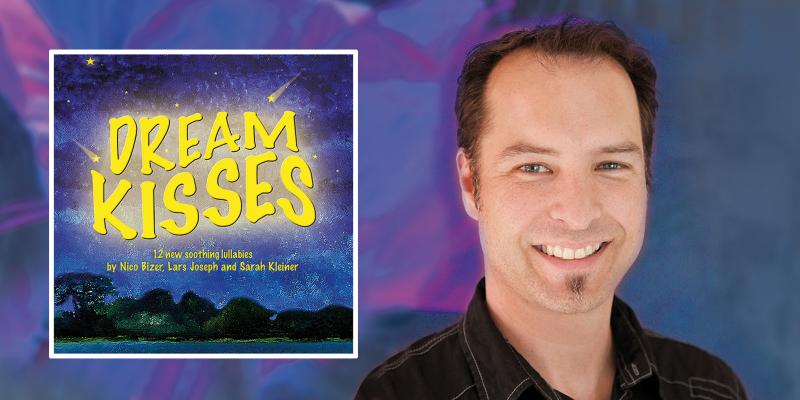 For many parents, how to lovingly accompany their children to sleep is a topic that seems inexhaustible. It is not for nothing that there are tons of advice and the conversations of young, new parents often revolve around the sleep or non-sleep of their little ones. It was the same with german singer/songwriter Nico Bizer almost 15 years ago. His children Noah and Carla also needed a reliable sleep ritual. How lucky that papa Nico was able to produce an entire album for his children with new musical good night kisses. The german "Traumküsschen" were born! With over 30,000 CDs sold and more than 10 million streams, these have become an integral part of the sleep ritual of thousands of families over the years. And because children's sleep is an international topic, there is now the english version: "Dream Kisses".With catchy melodies and imaginative lyrics, Nico Bizer (music & vocals) and Lars Joseph (text) have created a wonderful journey through the world of dreams. With their warm orchestral arrangements, the songs go far beyond mere "music box tunes". The texts are calming, sensitive and varied. And they tell the children little stories from life that is already understandable. The loving translations by Sarah Kleiner for the new version "Dream Kisses" accompany the children to sleep with songs like "A Little Flute", "The Apple Tree" or "Shine, shine, shine".Studies show that only ten minutes of gentle lullabies can make even the smallest children's hearts beat slower, it helps with relaxation and takes away fears. With a nice bedtime ritual, children combine positive experiences and build trust. The best base for peaceful evenings!"Due to the high demand of english speaking parents it was time to translate our songs. I am therefore very happy that children all over the world, but also of course here with us, for example in bilingual families or international kindergartens and playgroups, can now understand the lyrics and get better access to our songs ", says Nico Bizer.Dream Kisses 12 new soothing lullabies for children Download & Streaming: https://sptfy.com/dreamkisses Ages: 0-6 Runtime: 43 minutes www.instagram.com/nicobizer_music www.nbmusicfactory.comNB MusicFactory Nico Bizer Noepps 12 22043 Hamburg, GermanyNico Bizer is a singer, composer and producer from Hamburg, Germany. After many years of making music in different bands and as a studio musician, he got into children´s music after his son Noah was born. His beautiful lullabies have found their way into the evening rituals of thousands of children and parents. His christmas songs have been a great addition to the traditionals during the winter season, and his summer- and partysongs are perfect for a holiday trip in the car or the next birthday party.

You can edit or delete your press release Dream Kisses – the famous german lullaby album is finally available in english. here