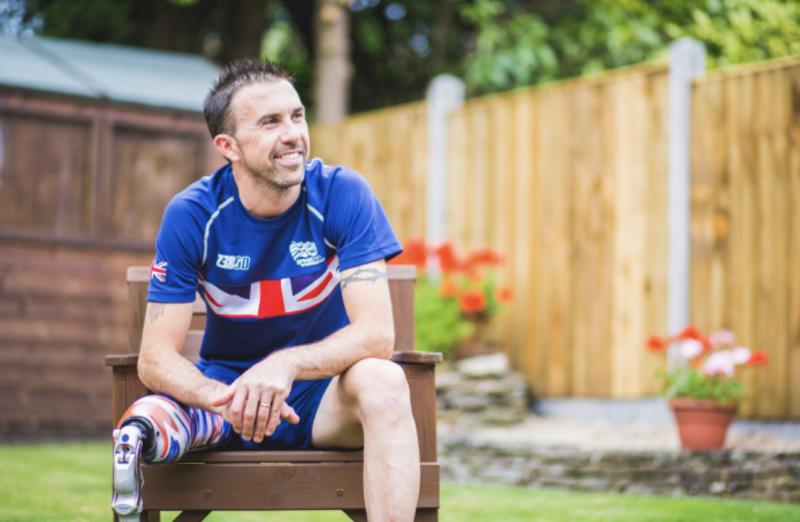 Andy Lewis MBE hangs up his blade.Paralympic champion announces retirement in the face of a cancelled Tokyo 2020, launches business to support mental health at work.Four years ago today, standing on Rio de Janeiro’s famous Atlantic Avenue, time slowed down for Andy Lewis. Staring out at the Copacabana coastline stretching ahead of him; the heat, the humidity, and a formidable line-up of competitors would make this his biggest challenge in a lifetime of setbacks.But just an hour later, the man from Lydney would blaze across the finish line in first place; taking gold in the first ever paralympic triathlon in history.The pinnacle of a triathlon career which also boasted British, European and International titles, and earned him an MBE from the royal family, Andy’s iconic performance in Brazil saw him break the ribbon a full minute ahead of his nearest rival. As the first to ever reach the podium in his discipline, let alone the top spot, Andy finally served his country in an altogether different way to his original plans.And without the chance to defend his title at the now-cancelled 2020 games, Gloucestershire’s world champion has made the decision to retire and once again change direction, channeling his energy into something new.Using lessons learnt from a complex life battling physical and mental setbacks, Andy has created a powerful, emotional and brutally honest message to share with the world:“I can change people’s lives, and it’s time for me to make good on my word. There is nothing more important than your mental health. Nothing. And I want to use my experiences to help people monitor, manage and improve it. Whilst I learnt the very hard way, I’m grateful for the lessons which have made me ten times stronger than I ever could have been. Nothing has levelled me yet, and that kind of resilience is what makes you successful, whatever your measure of that is.Plus in a time of isolation, remote working and homeschooling, so many companies feel helpless as they watch their employees struggle with this new normal. Motivation and mindset are muscles which need training like anything else. That’s why Bespoke Mentoring was born.”With 40+ years of experience in sport, education and business, the team at Bespoke Mentoring support organisations to get the most out of their people, by investing in their mental health.To find out more, visit www.bespokementoring.orgBespoke Mentoring Unit 13, Innovation Spaces Rockets Health & Fitness Club, Mile End Road, Broadwell, Coleford Gloucestershire GL16 7QDBespoke Mentoring was founded in 2018, as a partnership between paralympic Andy Lewis MBE and experienced educator Chris Powell. Together they work with individuals, schools and businesses, to offer bespoke training and support centred around the improvement and understanding of mental health.

06-03-2019 | Arts & Culture
H Ventures Zürich
ANDY MEETS WARHOL at Art Basel in Basel 2019
PRESS RELEASE ________ ANDY MEETS WARHOL at Art Basel in Basel 2019 Enabled by AXA ART Versicherung AG, longtime Partner of Art Basel in Basel ______ Zürich, 22nd May 2019. ANDY MEETS WARHOL visits and reports between the 11th and 16th of June 2019 from Art Basel in Basel. The visit of the renowned Swiss art blogger is supported by AXA XL Art & Lifestyle. AXA XL Art & Lifestyle is a longtime partner of the
09-28-2011 | Leisure, Entertainment, Miscel …
Venetian Macao
Andy Hui to Bring His Star Power to the CotaiArena
Hong Kong pop sensation Andy Hui is set to light up the CotaiArena™ stage with his charms, as he brings his reputable talents to The Venetian® Macao-Resort-Hotel on October 29. Having already generated rave reviews from his sold-out Hong Kong performance in May, the singer and actor will bring his On And On 25th Anniversary Concert to his Macao fans, with tickets going on sale September 28. As one of the
08-02-2011 | Business, Economy, Finances, B …
Crestron Electronics, Inc.
Andy Bennett Joins Crestron as Residential Regional Sales Manager
Rockleigh, NJ, July 28, 2011 – Crestron today announced the appointment of Andy Bennett as its new Residential Regional Sales Manager, covering southern California. Bennett joined Crestron from Novidor and Firestone where he was the Southwest Territory Manager. In this position, Bennett will utilize his sales and marketing experience to drive growth and brand awareness of Crestron solutions within his territory. “I am excited to have Andy join our dynamic west
05-20-2011 | Business, Economy, Finances, B …
RSL Funding, LLC
Andy Galloway Joins RSL Funding as Senior Account Executive
RSL Funding Adds Staff In Response To Robust Growth As Top Structured Settlement Purchaser. Mr. Galloway brings top talent to RSL Funding. Houston, TX, May 20, 2011 -- RSL Funding, industry leaders in purchasing structured settlements, lottery winnings and annuities, added Senior Account Executive Andy Galloway to its growing team of seasoned sales and financial services professionals. Having increased its structured settlements purchasing sales staff by 25% in 2010, RSL Funding
05-26-2009 | Tourism, Cars, Traffic
Swissotel Merchant Court, Singapore
SWISSÔTEL MERCHANT COURT, SINGAPORE APPOINTS ANDY YEO AS EXECUTIVE CHEF
Singapore, 28 May 2009 – Swissôtel Merchant Court is pleased to announce the appointment of Andy Yeo as Executive Chef to lead its culinary team. With over 22 years of experience, Chef Yeo is a veteran in the culinary world. He joins Swissôtel Merchant Court to elevate the dining experience for the hotel’s guests. Prior to joining Swissôtel Merchant Court, Chef Yeo who specialises in Local and Western cuisine, has
04-28-2006 | Leisure, Entertainment, Miscel …
SugarHill Recording Studios
Johnny Nash Mixes with Andy Bradley at SugarHill
(HOUSTON, TEXAS) – April 27th, 2006 – Houston native and music legend Johnny Nash made a long awaited return to music after a spotlight hiatus, at SugarHill Recording Studios. Johnny Nash’s 1972 hit “I Can See Clearly Now” topped the billboard charts for 4 weeks and continues to receive international radio airplay; it was successfully covered by Jimmy Cliff in 1994. Nash has also collaborated with many prominent artists throughout his
Comments about openPR
I can't but agree to the positive statements about your portal: easy to use, clear layout, very good search function, and quick editing!
Jens O'Brien, Borgmeier Media Communication