Don’t Charge These Horses with a Crime 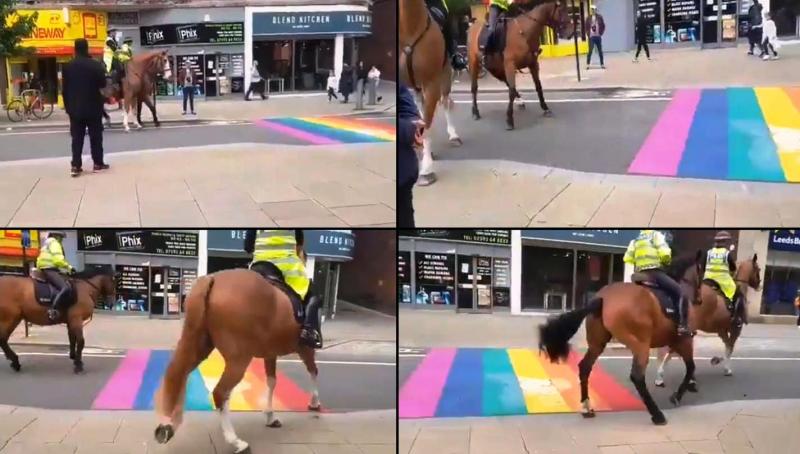 Last month we reported on how many communities, especially in Canada, are starting to charge people with crimes for disrespecting the special rainbow crosswalks that have been created to advance the LGBT + agenda. City officials around the world are painting the colors of the rainbow on their streets as a public exhibition and re-education program to condition people to accept the gay lifestyle.

Now it turns out that police horses are refusing to bow to the LGBT+ lobby. It seems that the animals know when something is wrong even when humans can’t get things right. A video has surfaced showing police horses avoiding the LGBT+ crosswalks. These horses are rejecting the disastrous human constructs that go against nature.

Animals are a lot smarter than people realize. Is some cases, they are smarter than humans. In Numbers 22:23 we see that the donkey was smarter than Balaam the Prophet because it turned away from the danger (sword) that was ready to cut him and Balaam down. Fortunately for Balaam, who didn’t see anything, his life was spared by the quick actions of his donkey.

We also know that the animals in the days of Noah had enough sense to get into the Ark (including the donkeys), while the overwhelming majority of people refused. Tragically, humans were lost while the animals were saved. God’s word tells us to consider the ant and learn from nature and be wise (Proverbs 6:6).

We stand in solidarity with police horses. Don’t charge them with a hate crime. Horses have an intelligent sense of danger and they know what to do as soon as they identify a threat. Why can’t we? Why can’t our churches? Apparently these police horses are binary (they believe in male and female), and they don’t want to be confused with rainbow unicorns.

They are horses. Don’t call them zebras, giraffes or unicorns because they are not transitioning. Don’t blame them for not wanting to touch the rainbow colors with their hooves or be corrupted with LGBT+ inventions. This is proof that horses are smarter than the sheep who blindly follow radical gay theories.

05-27-2021 | Media & Telecommunications
Blu Digital Group
Blu Digital Group Officially Certified as a LGBT Business Enterprise by the Nati …
Blu Digital Group is proud to announce their recent certification as a Certified LGBT Business Enterprise® through the National LGBT Chamber of Commerce (NGLCC) Supplier Diversity Initiative. The NGLCC is the business voice of the LGBT community and serves as the nation’s exclusive certifying body for LGBT-owned and -operated businesses. Blu is now eligible to participate in the NGLCC’s supplier diversity programs with Fortune 500 and government agencies nationwide, can take
04-10-2019 | Arts & Culture
Setting The Record Bent
BRAND NEW LGBT+ PODCAST VOWS TO HOLD MEDIA TO ACCOUNT
Setting The Record Bent is a brand new LGBT+ podcast for 2019, promising to tackle topics which are so often misinterpreted in the mainstream media. Brainchild of marketer Stefan Evans (Social Chain) and DJ James Bowers (Gaydio), the podcast focuses on trending topics within regard to the LGBT+ community, promising to set the record bent on all of the biggest queer calamities facing our generation. The first episode ‘Drag Race
05-04-2017 | Science & Education
Edupliance
Edupliance Tackles LGBT Acceptance In Colleges With New Webinar
Edupliance announces webinar titled, “LGBT Acceptance: What All Colleges Need to Know” that aims to update attendees on how to educate the higher education community in the proper way to navigate issues regarding Lesbian, Gay, Bisexual, and Transgender students and staff members. The webinar goes LIVE on Tuesday, May 9, from 01:00 PM to 02:00 PM, Eastern Time. According to the Association of Governing Boards of Universities and Colleges, there may
11-29-2012 | Fashion, Lifestyle, Trends
GODDESSY
LGBT Playboy Centerfold Stephanie Adams Speaks Out About LGBT Activism in her Ne …
She was Playboy's Miss November 1992 and the first Playboy Centerfold to come "out" in the media. 20 years later, Stephanie Adams is 42 years old and looks better now than ever before, as seen in her new photo book and memoir entitled Proudly Over 40: Playboy Centerfold Stephanie Adams 20 Years Later. "There was a time once when I thought I had nothing, but what I really had was nothing
03-13-2012 | Leisure, Entertainment, Miscel …
LGBT Center of Raleigh
The LGBT Center of Raleigh Receives Trailblazer Award
RALEIGH, N.C., (March 12, 2012) — The LGBT Center of Raleigh, organizer of the second annual OutRaleigh festival themed “All Families Matter,” announces today that the Human Rights Campaign has honored it with the Trailblazer Award. The award recognizes an individual or organization that has contributed to improving the lives and visibility of lesbian, gay bisexual and transgendered people. Presented at the February 25 NC HRC Gala, ceremonies included showing
11-17-2010 | Tourism, Cars, Traffic
Miami-Dade Gay & Lesbian Chamber of Commerce
MetLife Sponsors New LGBT Visitor Center in Miami Beach
The Miami-Dade Gay & Lesbian Chamber of Commerce Foundation, Inc., and MetLife are pleased to announce the grand opening of the new LGBT Visitor Center at 1130 Washington Avenue, Miami Beach. This new venue is the only LGBT Visitor Center in America sponsored by MetLife. The Center provides a one-stop-shop for visitors and residents to learn about LGBT and allied businesses where they can stay, shop and dine on Miami
Comments about openPR
I can't but agree to the positive statements about your portal: easy to use, clear layout, very good search function, and quick editing!
Jens O'Brien, Borgmeier Media Communication