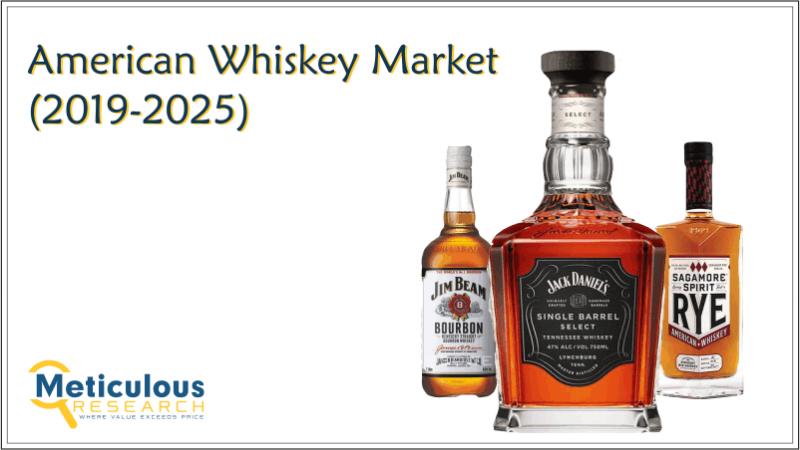 Rapid urbanization is one of the key factors pushing the demand for American whiskey, especially in developing countries such as India. Purchasing power coupled with a transition in the lifestyle of the consumers, especially the young population has shown a positive impact on the growth of the American whiskey market. The young population is more inclined towards the consumption of expensive alcoholic beverages and whiskey is the preferred choice among the other types of beverages. Strengthening economic condition of the underdeveloped and developing countries along with the expansion by the manufacturers operating in this industry is expected to provide substantial opportunities for the growth of the American whiskey market in the next few years.According to a new market research report titled, “American Whiskey Market by Type (Bourbon, Tennessee, Rye Whiskey), Geography (U.S., Canada, Mexico, U.K., Germany, France, Spain, Russia, Poland, Italy, Austria, Switzerland, Australia, Japan, China, India, Brazil, Argentina, Chile) – Forecast to 2025”.According to this latest publication from Meticulous Research®, the global American whiskey market is expected to grow at a CAGR of 9.9% from 2019 to reach $16.8 billion by 2025. The growth in the American whiskey market is mainly attributed to growing demand for premium American whiskies and the rising number of super-premium and ultra-premium brands, rapid urbanization across the globe, and fast-growing cocktail market. In addition, effective marketing strategies & promotions, growing new product launches, and rising export of American whiskies are the emerging trends positively impacting the market growth during the forecast period. On the other hand, stringent government rules and regulations, change in consumer preferences, and the threat of substitutes – are recognized as the major hurdles to overcome in the American whiskey market.Get Free Sample Copy of This Report at: https://www.meticulousresearch.com/request-sample-report/cp_id=5042Based on type, bourbon whiskey is estimated to command the largest share of the overall American whiskey market in 2019. The largest share of bourbon whiskey is due to huge demand from international adult consumers and more exploration of the U.S. spirits, majorly driven by their fascination with American whiskey’s heritage, as well as its mixability and versatility in cocktails. However, Rye Whiskey is expected to grow at the fastest CAGR during the forecast period.North America commanded the largest share of the global American whiskey market, closely followed by Europe and Asia. The consumer knowledge and their thrust to explore a different variety of premium whiskies is driving the demand for American whiskey. However, the Asia Pacific region is slated to register the fastest growth at a CAGR of 15.2% during the forecast period, primarily due to the growing demand for premium Japanese barrel-aged whiskey, favorable trade policies, and rising demand for the highball- a mix of whiskey and soda served over ice. Increasing consumption in developing countries like India and Australia is further supporting the growth of this market in this region.The report also includes an extensive assessment of the key strategic developments adopted by leading market participants in the industry over the past 4 years (2016–2019). The American whiskey market has witnessed the number of new product launches, agreements partnerships & collaborations, expansions, and acquisitions in recent years. For instance, in March 2019, Beam Suntory has launched Legent, a unique bourbon. Similarly, in June 2019, Brown-Forman Corporation acquired Fords Gin, a premium gin to its growing portfolio. The purchase will include the Fords Gin trademark and other assets of The 86 Company.Browse key industry insights spread across 120 pages with 73market data tables & 69 figures & charts from the report: https://www.meticulousresearch.com/product/american-whiskey-market-5042/Scope of the Report:American Whiskey Market, by TypeBourbon Whiskey Tennessee Whiskey Rye WhiskeyAmerican Whiskey Market, by GeographyNorth AmericaU.S. Canada Mexico EuropeU.K. Germany France Spain Russia Poland Italy Austria Netherlands Switzerland Rest of Europe (RoE) Asia-PacificAustralia Japan China India Rest of Asia Latin AmericaBrazil Argentina Chile Rest of Latin America Middle East & AfricaTOP 10 COMPANIES IN AMERICAN WHISKEY MARKET @ https://meticulousblog.org/top-10-companies-in-american-whiskey-market/The prominent players operating in the American whiskey market are Brown-Forman Corporation (U.S.), Beam Suntory, Inc. (U.S.), Diageo PLC, Davide Campari-Milano S.p.A., Heaven Hill Brands, Sazerac Company, Inc., Kirin Holdings Company Limited, Castle Brands, Tuthilltown Spirits, and Luxco, Inc. among others.Key questions answered in the report-Which are the high growth market segments in terms of type and region/countries? What was the historical market for American whiskey across the globe? What are the market forecasts and estimates for the period 2019–2025? What are the major drivers, challenges, and trends in the global American whiskey market? Who are the major players operating in the global American whiskey market? What are the recent developments in the global American whiskey market? What are the different strategies adopted by the major players in the global American whiskey market?Download free sample report and gain crucial industry insights: https://www.meticulousresearch.com/download-sample-report/cp_id=5042Contact Us:Meticulous Research Email- sales@meticulousresearch.com Contact Sales- +1-646-781-8004 Connect with us on LinkedIn- https://www.linkedin.com/company/meticulous-researchAsia-Pacific Office No-202, 203,204,205,206; 2nd Floor, Pushpak Business Hu, Wakad, Pimpri-Chinchwad, 411057, India.About Meticulous ResearchThe name of our company defines our services, strengths, and values. Since the inception, we have only thrived to research, analyze and present the critical market data with great attention to details.Meticulous Research was founded in 2010 and incorporated as Meticulous Market Research Pvt. Ltd. in 2013 as a private limited company under the Companies Act, 1956. Since its incorporation, with the help of its unique research methodologies, the company has become the leading provider of premium market intelligence in North America, Europe, Asia-Pacific, Latin America, and Middle East & Africa regions.

You can edit or delete your press release American Whiskey Market Worth $16.8 Billion by 2025: Focus on Bourbon, Tennessee, Rye Whiskey | Meticulous Research® here