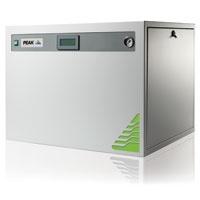 : Launched last year, the Genius range of Gas Generators from Peak Scientific is world-renowned for being smoother, quieter, safer and more efficient than any other generator on the market. Today, the Genius range grew in strength with the addition of the NM-3G Nitrogen Generator.The NM-3G Nitrogen Generator, designed specifically for use with LC/MS (Liquid Chromatography – Mass Spectrometry) instruments, offers safeguards unique to Peak Scientific generators to deliver reassurance and confidence for critical functionality. When designing the NM-3G, Peak Scientific’s engineers worked with leading LC/MS instrument manufacturers including Waters Corporation, Thermo Fisher Scientific, Agilent Technologies, Shimadzu and Bruker to build a nitrogen generator which would meet the approved flow rates, purities, pressure and, above all, reliability required by LC/MS applications.The 3G range of generators benefits from improved compressor cycling for longer compressor life and new technology and programming. Crucially, a back-up compressor ensures continuous operation in the unlikely event of one compressor failing. This feature is totally unique to Peak Scientific’s 3G- range of generators, making the NM-3G the only nitrogen generator on the market with this level of reassurance designed for use with all LC/MS instruments.“The back-up compressor fitted to the NM-3G makes it ideal for use in clinical applications. These generators are designed for situations where failure simply isn’t an option and confidence in the generator is essential.” – Chris Pugh, Engineering DirectorThe NM-3G utilises ‘membrane technology’ to generate nitrogen, separating gases via the principle of selective permeation across the nitrogen membrane wall. Fast gases permeate through the membrane wall more readily than slow gases, separating the original gas mixture into two streams. This allows the generator to isolate nitrogen from normal air, which is fed into the system via internal air compressors making it a standalone system which doesn’t require an external air source. The purity of the desired streams can be adjusted depending on operating conditions, with the system capable of delivering high-purity nitrogen at 30 L/min under normal operating conditions.As with all Peak Scientific gas generators, the NM-3G comes with their world class after sales service as standard.Peak Scientific have been designing and manufacturing gas generators at their base near Glasgow since 1997. Realising that the market was dominated by a handful of big players, with an industry giant controlling 65% of the market share, Peak Scientific challenge the status quo via innovation and product development, designing out the flaws inherent in the first wave of new gas generators. Today this strategy has proven to pay off with the small Scottish company enjoying 15% market share, a worldwide customer base with over 80% of them overseas earning the company a Queen’s Award for Enterprise and an annual turnover of £14.7mill in 2011.Peak Scientific Instruments Ltd manufacture a range of laboratory Gas Generators, including nitrogen, hydrogen and zero air suitable for most laboratory analytical applications including LCMS (Liquid Chromatography – Mass Spectrometry and GC (Gas Spectrometry). Their generators are used in a wide range of scientific and industrial applications including pharmaceutical drug development and forensic identification of unknown chemicals. The Peak Family now extends to more than 100 members, based either in our offices in the UK, USA, India, Germany, China, Mexico and South- Africa or based as Tier 2 Support in countries such as Canada, Australia and Poland.Sean Bruce Office: +44 (0)141 530 4182 Fax: +44 (0)141 812 8200 eMail: sbruce@peakscientific.com Website: http://uk.peakscientific.com/ Fountain Crescent Inchinnan Business Park Inchinnan PA4 9RE Scotland, UK