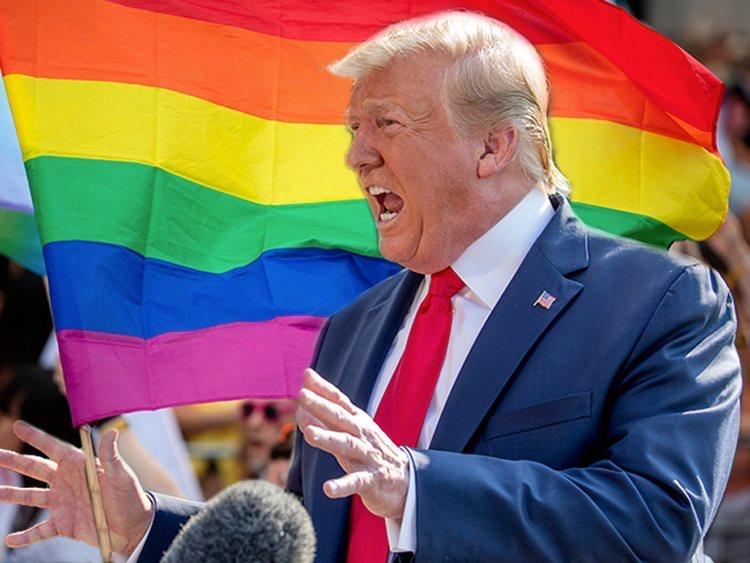 Richard Grenell is the first openly gay person to serve in a U.S. cabinet-level position. U.S. President Donald Trump nominated Grenell to serve as the U.S. Ambassador to Germany in 2018. Later President Trump appointed Grenell as Acting Director of National Intelligence in the Trump Cabinet in 2020.

Last week, Grenell posted a 3-minute video on Twitter praising Donald Trump’s “historic” accomplishments for the LGBT+ movement and called Trump “the most pro-gay president in American history.”Donald Trump was flattered by Grenell’s video and words of praise and gave a reply on Twitter with the words: “My great honor!!!”

Here we can see once again that the future survival of our American Republic will not depend on the outcome of the 2020 presidential elections. Our hope is neither in a president nor in a policy. LGBT+ activists are playing both sides. They have taken over the Republican and Democratic parties. It doesn’t really matter who is in office; nothing is going to stop the sexual revolution that is sweeping the world.

Christians with traditional views on marriage and sexuality will be targeted. If our church leaders continue to ignore the LGBT+ threat to civil and religious liberty, one day they are going to realize it when it’s too late. The threat of Christian persecution, jail and huge fines by the gay lobby is very real.

Click to see the video and to read the full story: http://adventmessenger.org/donald-trump-accepts-the-title-of-being-the-most-pro-gay-president-in-american-history/

08-26-2020 | Leisure, Entertainment, Miscel …
Advent Messenger
900 Catholic Masses for President Donald Trump
With only three months to go until the November 3, 2020 presidential election, the Trump 2020 campaign is working hard to attract Catholic voters. The Trump campaign has a website to court the Catholic vote. It is called Catholics for Trump 2020 and it is motivating Roman Catholics to support the re-election of Donald Trump by appealing to the abortion issue. The website says: “Catholics for Trump will energize and activate
12-17-2018 | Business, Economy, Finances, B …
Calstate Companies
How Trump Buys Real Estate
LOS ANGELES, CA. If Donald Trump did, in fact, purchase Russian real estate, he might have employed the following strategies: First, he would acquire a team of experts to help him. Trump understands the old saying: “If you act as your own attorney, you have a fool for a client.” This could also apply to the person who tries to be his or her own property manager, real estate broker, accountant,
10-05-2018 | Business, Economy, Finances, B …
Project: Return to Work
Port Charlotte volunteer to receive award from President Trump
A Port Charlotte woman is getting recognition from President Donald Trump for her service to an organization that helps thousands of wounded veterans and others find meaningful employment. Fran Nixon, Florida Missions Operations Manager (MOM) for Project: Return To Work Inc. (R2W), will receive the President’s Volunteer Service Lifetime Achievement Award in a ceremony on Sunday, Oct. 7. “Veterans hurt in combat gave up so much for our freedom,” said R2W
05-28-2018 | Advertising, Media Consulting, …
Spire Research and Consulting
The Trump Presidency:One Year On
One year since President Trump took office, what has been the impact for businesses in Asia? Leon Perera, CEO of Spire Research and Consulting, shared his thoughts in The Business Times – Views from the Top section on 27 November 2017 on the impact on global economy. Thus far, Donald Trump’s Presidency has not been bad for the American stock market and the US dollar. However, the expected infrastructure spending and
12-14-2017 | Business, Economy, Finances, B …
Coefficients Co. Ltd.
Trump Promised to Study US and PH Trade Deal
United States President, Donald Trump, committed to studying the proposed free trade agreement (FTA) between the US and the Philippines. As per the presidential spokesperson, Harry Roque, he stated that the US president had promised to look into the FTA proposal during their 40-minute bilateral conference with PH president, Rodrigo Duterte, amidst the ASEAN (Association of Southeast Asian Nations) summit. “The Philippines is appreciative of the General System of Preference (GSP) and
11-15-2017 | Leisure, Entertainment, Miscel …
Over the Rainbow Group
TRUMP SIGNS EXECUTIVE ORDER ABOLISHING THANKSGIVING
Washington, DC – On October 13, 2017, surrounded by smiling, loyal supporters, President Donald Trump signed an Executive Order banning the celebration of Thanksgiving within the boundaries of the United States and its territories. Expressing a desire to bring Americans together by participating in the ongoing wave of calls for historical accuracy, manifested primarily by efforts to remove monuments recognizing treasonous Confederate military leaders from publicly owned properties, Trump stated his
Comments about openPR
Your portal is fast, simple, and easy to use. Others may have more functions but they also demand more editing time, you have to preformat the text in order to achieve a good result etc. I think openPR is really fantastic!
Andreas Knepper, wallmedien AG