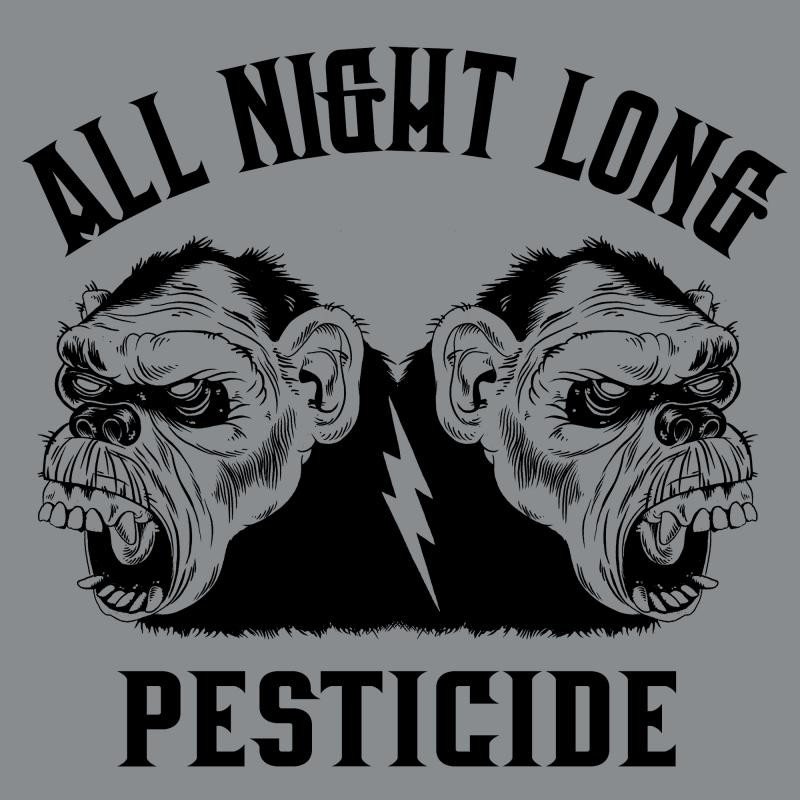 Switzerland, Bern, August 23, 2020 – For Immediate ReleasePESTICIDE RELEASES A NEW SINGLE FROM THE WAST EMPTY NEVER ENDING "NIGHT" WAITING FOR THE NEW DAWN, WHILE HOWLING AT THE MOON, TRASHING GUITARS AND EATING ALL THE BANANAS, GET YOUR MONKEY MASKS READY...Following up on their EP “Monkey Speedway”, the Swiss hard rock group Pesticide releases a new single “All Night Long” on „1th of October 2020„. Distributed world wide via iMusician Switzerland."Alex Röck" describes the new Single “All Night Long” as follows: “All Night Long“ was written an recorded during the Corvid-19 Lock-down. I think the lyrics reflect it as it an never ending night and the morning dawn is waiting to take over. It was strange to produce it as we where mostly alone in the studio. It nails the state of mind we where all in, a bit lost and on the border of insanity while the repeating licks are hammering at you.For Pesticide last EP “Monkey Speedway”, released in 2019, the German based Rockhard Magazine (Jens Peters) said: "Great shit: The six tracks on Monkey Speedway go through your ears directly into your brain and tick there, resistance is pointless."The single will be available in all major digital music stores and streaming platforms.Single release: 01.10.2020 Label: Alexander Pina (IFPI), iMD-MönkeyÖnSeRöcksContact info: Name: Alexander Pina Address: Linden 4, CH-3124 Belpberg , Switzerland Mail: pesticide@alex-rock.ch Homepage: https://pesticide.chPesticide from Switzerland, founded at the end of the soaring millennium years has gone through many hurricanes and death marches in their musical career. One stormy day in 2014 the monkey crew got together, stealing all the coconuts from the local grocery store and started jamming. Pesticide is an established hard rock group from Switzerland, taking classic hard rock elements and combining them with metal attitude. After the album production of „12 Inch Monkeys“ in 2012 – which starred an array of guest musicians – Pesticide restructured the Line-Up in 2014. The two founding members and brothers „Roland Zenger“ (guitar) and „Matthias Zenger“ (Bass) where accompanied by the hard rock shouter „Alex Röck“ (vocals) , the drummer „Pascal Wicky“ (drums) and the organist „Andreas Siegenthaler“ (hammond). With the new line-up Pesticide was undergoing some musical changes. In-cooperating the Hammond organ and the new singers tonal range changed the expression and the songwriting process and something new began. Acquiring more classical hard rock and bluesy elements.rockin’ voice, dirty riffs, delirious organ, heavy beats, fat bass!

02-13-2018 | Advertising, Media Consulting, …
MordorIntelligence
The Transforming Global Pesticide Market
Market Insights The global crop protection chemical market report offers a detailed analysis of the market structure, along with forecast for various segments and sub-segments of the market studied. The global crop protection market was valued at USD 51.44 billion in 2017, and is expected to register a CAGR of 3.1% during the forecast period, to reach the value of USD 5.76 billion by 2023. The previous decade, which saw a
12-05-2017 | Science & Education
Mordor Intelligence
Microbial Pesticide Market
Valent BioSciences, Certis, BioWorks, Morrone BioInnovations, among others, Coexist in the Global Microbial Pesticide Market The Global Microbial Pesticide market was valued at USD 1,388.55 million in the year 2015, and it is projected to record a CAGR of 12.51% in the forecast period to reach a value of USD 3,075.88 million by 2022. Latest Developments Crop protection multinationals have shown a lot of interest in the bio-control industry, giving the highest
11-20-2017 | Advertising, Media Consulting, …
IndexBox Marketing London
U.S. Pesticide Market Report, 2017-2025
IndexBox has just published a new report "U.S. Pesticide And Other Agricultural Chemicals Market. Analysis And Forecast to 2025" ( http://www.indexbox.co.uk/store/us-pesticide-and-other-agricultural-chemicals-market-analysis-and-forecast-to-2020?utm_source=opr ). This report is best suitable for you if you: • Are planning to enter a new geographical market and wish to know which one is best for your product • Are planning to enter a new product market and want to have a detailed overview of the market before entering • Already
11-20-2017 | Advertising, Media Consulting, …
Market Data Forecast
Agrochemical And Pesticide Market Segment-level analysis
Agrochemical and Pesticide Market was worth USD XX.XX billion in 2016 and estimated to be growing at a CAGR of X.XX%, to reach USD XX.XX billion by 2021. An agrochemical or agrichemical, a varied nomenclature for agricultural chemical is as the name suggests, a chemical substance used to aid in cultivation or its concerned activities. The range of products may vary from herbicides and insecticides to fungicides and nematicides. Other
09-13-2017 | Advertising, Media Consulting, …
REPORTSANDMARKETS
Pesticide Preparations Market Research Report 2017
In this report, the global Pesticide Preparations market is valued at USD XX million in 2016 and is expected to reach USD XX million by the end of 2022, growing at a CAGR of XX% between 2016 and 2022. Access Full Report: https://www.reportsandmarkets.com/reports/global-pesticide-preparations-market-research-report-2017-1563743 Geographically, this report is segmented into several key Regions, with production, consumption, revenue (million USD), market share and growth rate of Pesticide Preparations in these regions, from 2012 to
06-05-2017 | Business, Economy, Finances, B …
ReportsWorldwide
Survey of Pesticide Industry in China
ReportsWorldwide has announced the addition of a new report title Survey of Pesticide Industry in China to its growing collection of premium market research reports. As a large agriculture country, China has become the biggest production base of pesticides in the world, with its crop area of over 160 million hectares in the past four years, strongly supporting for large domestic pesticide demand. In 2010-2015, China's pesticide output had kept an
Comments about openPR
OpenPR is clearly structured and remains true to its principle of confining itself to the essential parts. OpenPR has proven to be a very good and reliable partner to our media agency: Within the shortest time the releases are online and go down well with the media representatives. The success of OpenPR is reflected in the steadily increasing number of press releases. It is good that OpenPR exists!
Ursula Koslik, Director Marketing & PR, F+W Hamburg