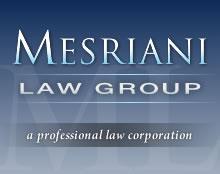 LOS ANGELES - The Mesriani Law Group has secured a settlement amounting to $75,000 for a female victim of racial and age discrimination in the workplace.

According to the victim, she was hired as Operations Area Manager for a biotechnology tools company. However, during her first three weeks in the job, her responsibilities and tasks frequently changed. Despite the increase in her duties and tasks, she still performed what was expected of her and was even commended by her manager and her subordinates for outstanding work ethics and leadership qualities. Subsequently, she swiftly became the Manufacturing Science Manager, which is clearly far from the post she applied for at the Carlsbad-based company.

As she continued with her job, she experienced harassment and discriminating acts, which resulted in a hostile work environment.

According to her, she received sexual comments from the Senior Manager. On July 28, 2010, the harassment worsened when the manager confronted the victim at the conference room, asked why she did not like him and then closed the door when the victim tried to leave.

She brought the matter to the Human Resources Department, and then to her supervisor, hoping that the issue will be resolved. However, no action was taken.

The victim felt retaliated against when the company informed her that she will be transferred to another site, and her supervisor told her that her position would be assumed by a white female employee younger than her. The incident has caused her depression which eventually drove her to seek legal assistance of expert employment attorneys of Mesriani Law group, who took up the case immediately.

With the competent representation and good litigation skills of Mesriani Law Group employment attorneys, the offending party was forced to settle the claim for $75,000.

This is not the first time that the Mesriani Law Group has delivered justice for an aggrieved employee. For more than 15 years, it has successfully represented thousands of clients in various employment and labor cases before state and federal courts, making it one of the best and most reliable law firms in southern California.

You can edit or delete your press release Expert Employment Attorneys Recover $75,000 for Racial and Age Discrimination Victim here

01-23-2019 | Advertising, Media Consulting, …
Kenneth Research
GLOBAL SOFTWARE DEFINED SECURITY MARKET TOP KEY PLAYERS ARE CISCO SYSTEMS (CALIF …
The security of virtualized infrastructure has been a major cause of concern for enterprises. Consequently, this concern has been the major driving factor behind the adoption and growth of the global software-defined security market. As more and more companies start relying on cloud based infrastructure, the global software-defined security market will keep on posting high growth figures. The growing awareness among companies about the usage and benefits of the software-defined
01-28-2016 | Business, Economy, Finances, B …
Engage PEO
Engage PEO Expands California Team
Melissa Johnson joins as vice president of sales in California. Fort Lauderdale, FL, USA -- Engage PEO, a leading professional employer organization providing HR outsourcing solutions to small and mid-sized businesses across the U.S., today announced the addition of Melissa Johnson as vice president of sales for California. She will be based in the San Francisco Bay Area, but will partner with brokers and clients throughout the state and across country. Johnson
11-12-2010 | Politics, Law & Society
Sagaria Law, P.C.
Foreclosure Rates Rising in California
Approximately $25 million was spent at foreclosure auctions in the Sacramento and Oakland areas last weekend. Several homes were sold at less than half the cost of their previous high property values. This trend of increasing foreclosure activity has been prevalent in California communities in the past years, and experts predict the trend will only continue to rise in the near future. Foreclosure cases in California have increased 50% in the
10-25-2010 | Business, Economy, Finances, B …
Simple Wave LLC
The California Avocado Festival
Simple Wave, LLC 3266 Arden Rd Hayward, CA 94545 Phone (866) 968-8558 Fax (650) 716-5220 Contact: Jeff Bollengier Phone: (925) 207-4800 http://store.calibowl.com/category_s/21.htm Hayward, CA, Oct 8th 2010: Simple Wave LLC’s is pleased to announce that its revolutionary brand, The CaliBowl™, was a smash hit, once again, at the Annual Avocado Festival in Carpinteria, CA. While in the middle of making another exciting deal with Singapore distributor, The JP Group, and working to introduce a new pet bowl line,
08-12-2008 | Industry, Real Estate & Constr …
Wang Law Firm
Greener California
On July 17, 2008, the California Building Standards Commission unanimously adopted the green building standards for all new construction statewide. This decision is the first of its kind in the nation to incorporate green building standards into the building codes. The California Green Buildings Standards Code is expected to be published at the end of 2008. It will be published as Part 11 of the 2007 edition
10-25-2007 | IT, New Media & Software
Satellite Family
California Wildfires Affect Internet Service
Laguna Niguel, CA, October 24 2007 - The recent California fires have cut off communication and internet service for some customers of cable, DSL, and dial-up service. Fires raging areas such as San Diego, Orange County, Malibu, and the Inland Empire have destroyed homes, downed power lines, and ruined telecommunications, severing all forms of contact for families and businesses. Crews throughout the fire ravaged areas are currently working to restore
Comments about openPR
OpenPR ist the nicest and most clearly laid out PR platform I have seen to this day. The press releases are displayed very nicely and clearly and without any unnecessary frills. The updates are fast and the finished release looks appealing and is clearly legible. Even with 16 years of experience one discovers new things from time to time. Congratulations!
Gabriele Ketterl, Director Marketing & PR, Menads