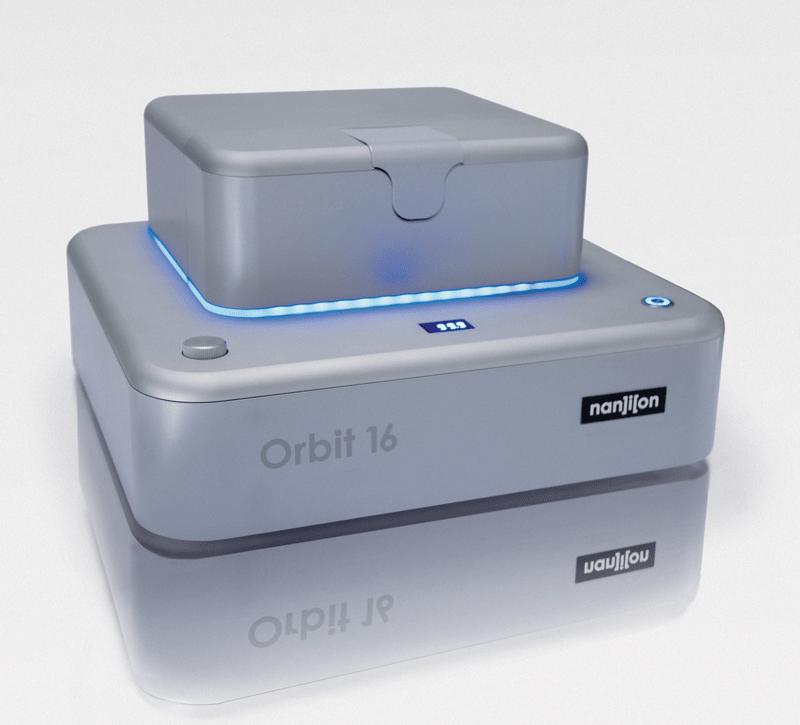 Munich, Germany, February 23, 2012; Today, Nanion announces the introduction of a completely new product line for efficient analysis of bilayer-reconstituted ion channels and nanopores. The first of these, the Orbit 16, allows for automated formation of, and recordings from 16 bilayers in parallel, combining efficient data generation and ultra-high data quality. The Orbit 16 takes the pain out of bilayer recordings and facilitates efficient data generation through 16 parallel recordings. Bilayer recording is a well-established technique for in-depth studies of biophysical properties of ion channels and is particularly suited for functional studies on proteins residing in intracellular membranes. Moreover, this technique forms the basis of a host supporting powerful emerging analytical techniques using biological nanopores as molecular sensors. Despite its proven value, bilayer recording can be very frustrating due to the capricious nature of lipid bilayers which have to be formed manually one by one and which often lack stability. The Orbit 16 speeds up the entire process by the rapid and simultaneous formation of 16, highly stable micrometer-sized bilayers and allows subsequent parallel recordings, thereby enabling efficient data generation. For increased experimental flexibility, two different recording chips are available; either Ionera's microelectrode cavity array (MECA) - or Nanion's-recording chips for work on (proteo-) liposomes, the latter as known from the Port-a-Patch.Dr. Gerhard Baaken, University of Freiburg, Germany, and founder of Ionera, says: “Ionera is the developer and will be the provider of the Micro Electrode Cavity Array chip substrates, used with the Orbit 16. We have recently published a study showing that the MECA supports high-resolution polymer sizing with a single biological nanopore (alpha-haemolysin) - one of the most tasks in bilayer recording- in a parallel format. We think that the Orbit 16 will be an ideal environment for our MECA-16 chip and will prove to be a highly enabling technology for bilayer and nanopore research due to the ease of bilayer formation and signal to noise quality of recordings. Thanks to the parallelism of the recordings, the researcher can in most cases obtain data and statistics from one single run.”Dr. Niels Fertig, CEO of Nanion Technologies, continues: “With the Orbit 16, Nanion enters a new market segment. The Orbit 16 has great potential since it makes bilayer recordings more efficient and accessible to a wider audience. The Orbit 16 offers excellent data quality, i.e. low noise at high bandwidth, in combination with an unmatched data throughput. We anticipate that these features make the Orbit 16 appealing to the ion channel- and nanopore-communities, or anyone who wants to enter the field of bilayer recordings. “The Orbit 16 has its public premiere at the Biophysical Society Annual Meeting, in San Diego, CA, USA, February 26 – 29, 2012.About Nanion: Nanion Technologies GmbH is a German Private Limited Company and was founded in 2002 as a spin-off from the Center for Nanoscience (CeNS) of the University of Munich. Nanion’s team has developed and globally established two highly successful automated patch clamp instruments as enabling tools for sophisticated and high throughput applications for ion channel research and drug discovery. Nanion's instruments use planar patch clamp chips which replace the traditional glass pipette used in the technique of patch clamping. Nanion was nominated in 2007 for Germany's most prestigious innovation award the Deutscher Zukunftspreis (German Future Prize, Federal President's Award for Technology and Innovation). About Ionera: Ionera (www.ionera.de) is a spin-off from the University of Freiburg, Germany. It aims to commercialize a proprietary multielectrode cavity array (MECA) technology for parallel bilayer recording jointly developed in the laboratories of Professors Jan C. Behrends (Department of Physiology) and Jürgen Rühe (Department of Microsystems Technology) of Freiburg's Albert-Ludwigs-Universität. Ionera's mission is to provide a universal platform for ion-conductance based analytics, including development and customized design of MECA-chips, nanopore and channel protein reconstitution kits and assay development. Ionera is currently located at the Laboratory for Membrane Physiology and Technology (Behrends Lab) in the Department of Physiology and at the Freiburg Centre for Materials Research (FMF), University of Freiburg, Germany.Contact details: Niels Fertig, CEO of Nanion, Phone: +49 89 2189 97972, Email: info@nanion.de, Web: www.nanion.de Gerhard Baaken, Project Leader Ionera, Phone: +49 761 2035145, Email: info@ionera.de, Web: www.ionera.deNanion Technologies GmbH Gabrielenstrasse 9 80363 Munich GermanyPress contact: Dr. Cecilia Farre, Marketing Director, cecilia@nanion.de