From a Comedy and Paranormal Production House, Comes a Horror Movie Like No Other 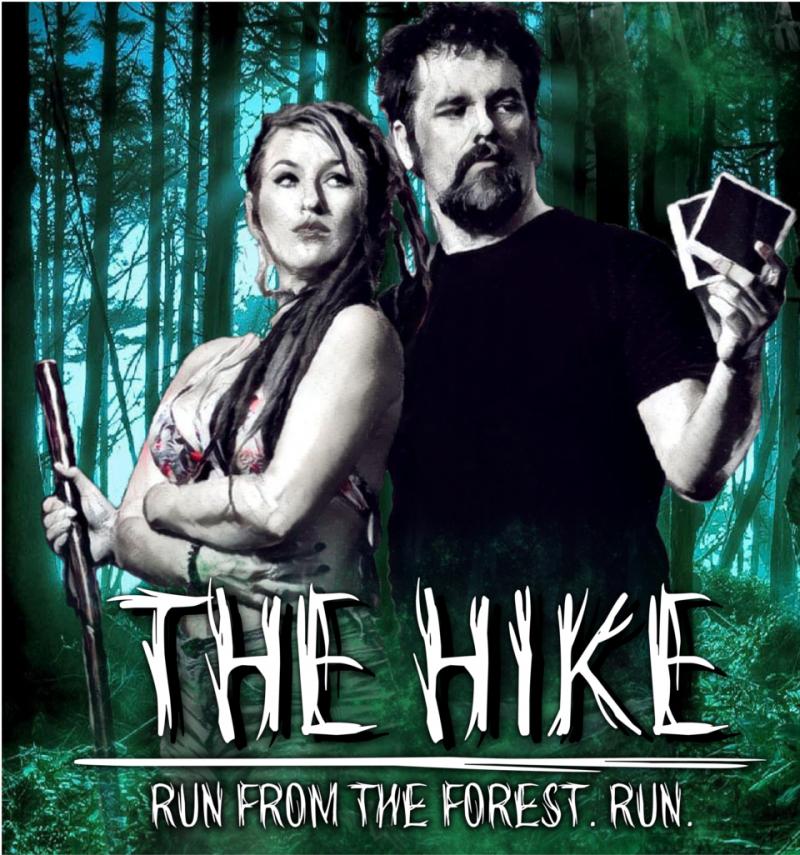 The Hike "Run From the Forest. Run"

Big N Funky Productions started in 2015 when Vinnie Vineyard and Luke Walker started writing, wrestling, booking, and producing a wrestling television show for Fox TV. It lasted six months. Viewers loved the odd ball pro wrestling program that featured vignettes such as a wrestler on the couch talking to his demented psychologist, a man obsessed with Funk music who constantly hit on female guests, and that time a grappler took a laxative before a match to appease the show's sponsor to self deprecating results. The wrestlers on the other hand were confused by the format, and the show imploded upon itself. Chalk that one up to experience. Vineyard and Walker have had more success recent years. One bright spot has been their paranormal TV show “Wrestling With Ghosts” that airs on ASY TV. Wouldn't you know it? It is the only paranormal show on TV that combines actual paranormal investigations with comedy skits. On that program, the guys produce, write, film and star in the show and try to get the ghosts to laugh at their antics, and the results have been very interesting. The show has a cult following, and because of that success, they produce three other shows for the network. The guys are not finished making genre busting entertainment. In quarter number four of this coronavirus plagued entertainment year, Walker and Vineyard have been tag teaming again, this time making a horror movie based on their adventures together. “The Hike” is billed as being based on actual events, and according to the pro wrestler/ comedians, its absolutely true. Much of the story is based on the misadventures of Vinnie's brother hiking in the Smoky Mountains. Other true aspects come from their show “Wrestling With Ghosts”, where the entire team tries to track Cherokee legend “Spearfinger” down on the most haunted trail in North Carolina: “Nolan Creek Trail”. They apparently found enough uncanny evidence to spark an interest in making a horror movie based on their experiences on that episode. This is Big n Funky Productions' first feature film.“The Hike” is a horror movie, but coming from Vineyard and Walker, there will be plenty of humorous moments, as well as scares. Researching IMDB tells us that there will be an appearance by a group of Furries, someone portraying Elvis Impersonator Lou Vuto and THE Charlie Hodge (Elvis's scarf and towel man), and something called “Beastiality” the wrestler. Throw in Spearfinger, random racy polaroids tossed around the trails of the Smoky Mountains and you are gonna have the most unique horror movie to come out of the south since Evil Dead. Vineyard, Walker, and their co-star from “Wrestling With Ghosts” Travis Graves will be doing their own stunts and promise for some pretty intense action sequences, as well. The film stars foxy rock n roller Kandi Thompson and Vinnie Vineyard (summoning his inner Funkmaster V wrestling persona) as a couple in over their heads in the deep woods. Luke Walker directs and stars, along with Travis Graves, Scott Lane (Spiderman: Homecoming, The Walking Dead), Keith Gavins, Kirby Gocke, Justin Thompson, Mitch Gore, and Tony Covington. There's also music from Toledo's Fish Fisher and Asheville's Spaceman Jones and the Motherships. “The Hike” will be released this fall. Check out www.TheHike2020.com or www.FunkmasterV.com for more info.Big N Funky Productions 912 Wears Valley Rd Pigeon Forge TN 37863Big N Funky Productions is a full service independent production company based in East Tennessee. We specialize in TV series, commercials, webs series, voice overs, scores, and full length feature films.

You can edit or delete your press release From a Comedy and Paranormal Production House, Comes a Horror Movie Like No Other here

08-23-2018 | Advertising, Media Consulting, …
XploreMR
Earbuds Market to receive overwhelming hike in Revenues by 2026
Demand for earbuds has been continuously witnessing shifts and expansion, with a wide variety of designs and features being incorporated by manufacturers. Consumers across the globe demand for earbuds that are capable of managing the strike between performance and price, which in turn has become a key strategy among earbuds manufacturers. Request to View TOC@ https://www.xploremr.com/report/576/earbuds-market/toc Innovations and improvements in earbuds are not likely to slow down in the near future,
06-12-2018 | IT, New Media & Software
TMR Research
Software-defined Security Market to Receive Overwhelming Hike in 2025
Global Software-defined Security Market: Snapshot Traditional security architectures for physical data centers are insufficient to meet the rapidly evolving needs of digital businesses. Enterprises in a move to accelerate the delivery of IT-enabled services need to transform their information security infrastructure with the adoption of next-generation data centers—software-defined data center (SDDC). Software-defined security is found to be a key enabler for implementing advanced and automated security controls for securing data and
05-21-2018 | Business, Economy, Finances, B …
TMR Research
Nocturia Market Prognosticate for hike in growth by 2025
Global Nocturia Market: Snapshot Nocturia, also known as nocturnal polyuria, is a medical condition in which patients get a frequent urge to urinate while sleeping at night. It is particularly prevalent among the elderly who often find it difficult to sleep properly. The three broad categories of nocturia are mixed nocturia, bladder storage problems, and nocturnal polyuria. Request Sample Copy of the Report @ https://www.tmrresearch.com/sample/sample?flag=B&rep_id=296 Although, women between 18 to 49 years
05-21-2018 | Advertising, Media Consulting, …
Xplore Market Research
Meatainers Market to receive overwhelming hike in Revenues by 2026
This report by Fact.MR provides valuable information for packaging companies and manufacturers of meatainers by offering an extensive forecast on the global meatainers market for the assessment period, 2017-2026. By addressing the key concerns of meatainer manufacturers and reflecting the impact of latest industry trends, the report delivers accurate forecast & analysis on the global meatainers market, and serves as a credible business documents for market players. Report Overview @ https://www.xploremr.com/report/962/meatainers-market Insightful
05-15-2018 | Business, Economy, Finances, B …
TMR Research
Chitin Market Inveigling Hike in Demand 2025
Global Chitin Market: Overview Chitin and Chitosan are important adaptable regular materials got from shells of prawns and crabs. The present and potential utilizations of chitin, chitosan and their subsidiaries in fields of biomedicine, nutrition, food production, pharmaceuticals, microbiology, agribusiness and cosmetics are plentiful. They are likewise utilized as a part of different applications ranging from anti-microbials and surgical sutures to dietary supplements, nutrition and pet foods and fabric for socks
02-14-2018 | Business, Economy, Finances, B …
TMR Research
Biscuits Market to Receive overwhelming hike in Revenues by 2024
Switzerland Biscuit Market: Overview Biscuits are a standout amongst various snacks over the globe. The current report, focused on its market in Switzerland, finds that it would progress at a sluggish pace on account of a saturated market where most of the demand has been satiated. Against such a background, in order to push up sales, players are spiking their products with various ingredients such as chocolate, nuts, and choco chips
Comments about openPR
OpenPR is clearly structured and remains true to its principle of confining itself to the essential parts. OpenPR has proven to be a very good and reliable partner to our media agency: Within the shortest time the releases are online and go down well with the media representatives. The success of OpenPR is reflected in the steadily increasing number of press releases. It is good that OpenPR exists!
Ursula Koslik, Director Marketing & PR, F+W Hamburg