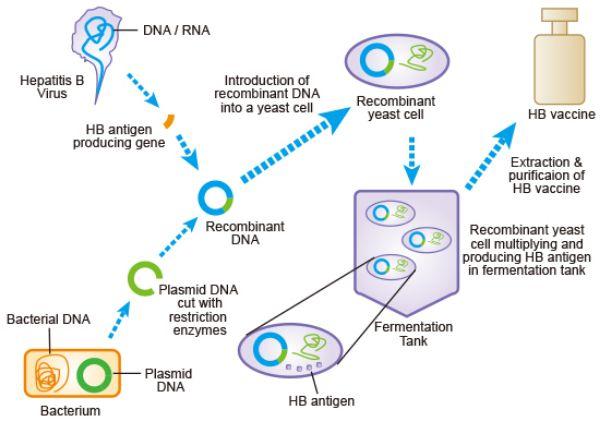 Increased in the awareness to focus on the prevention of vaccine preventable lethal diseases The Recombinant Vaccines Market was valued at US$ 830.2 million in 2016 and is projected to expand at a CAGR of 6.0% during the forecast period (2017–2025). There is an increase in awareness regarding prevention of vaccine preventable lethal diseases. Vaccination offer effective protection from various lethal diseases caused by various microorganisms such as bacteria and virus. Recombinant vaccines are much more effective and has less or no side effects over the conventional vaccines and demand for recombinant vaccines are expected to increase and various companies have involved themselves in the development of various recombinant vaccines and few of them are in clinical trial. The growth inhibiting factors of recombinant vaccines market such as increase in awareness, increase in lethal diseases, development of new technology, more effective than conventional vaccines and various vaccination programs conducted by government.Request a sample report @ https://www.coherentmarketinsights.com/insight/request-sample/455Various key players such as Pfizer Inc., Merck & Co. Inc., Sanofi S.A. and GlaxoSmithKline Plc. are involved in the development of new vaccines to strengthen their position and establish an evident presence in the global recombinant vaccines industry. These vaccines ensures the more effective prevention of diseases this would help in the improvement of health and reduction in mortality rates caused by vaccines preventable diseases such as influenza, cholera, mumps and human papilloma virus. Employing the advanced sterilizing procedure would help in reduction of the mortality rates caused as a result of infections due to contaminated tools and equipment. According to Centers of Disease Control and Prevention 2017 report, in the U.S. there were around 4,605 deaths caused by influenza in past one year.It is expected that increase in focus towards awareness with respect to vaccination against vaccine preventable diseases and increased in the demand for recombinant will favor the growth of recombinant vaccines market in the near future. According to Children’s Hospital of Philadelphia report 2014, there were around 85% of children over the globe vaccinated to protect them against tuberculosis, polio, diphtheria, tetanus, pertussis, and measles and these vaccines. Government has launched various vaccination program such as global vaccine action plan with aim to introduce new and improved vaccines, increase in research and technology for the development of new vaccines and eradication of vaccine preventable diseases such as rubella, measles and polio. According to Children’s Hospital of Philadelphia report 2014, around 3 million people die from vaccine-preventable diseases each year around the globe. Approximately 1.5 million of these deaths are reported among children less than 5 years of age due to several infectious diseases, as they transmitted from one person to another.Download PDF brochure of this report @ https://www.coherentmarketinsights.com/insight/request-pdf/455Some of the major companies in the recombinant vaccines market are Merck &Co. Inc., Green Cross Corporation, Pfizer Inc., Bayer AG, Sanofi S A., Protein Science Corporation, GlaxoSmithKline Plc., Novartis AG, and Bharat BiotechCoherent Market Insights 1001 4th Ave, #3200 Seattle, WA 98154,U.S. Phone: US +1-206-701-6702/UK +44-020 8133 4027 Email: sales@coherentmarketinsights.comAbout Us:Coherent Market Insights is a global market intelligence and consulting organization focused on assisting our plethora of clients achieve transformational growth by helping them make critical business decisions. We are headquartered in India, having office at global financial capital in the U.S. Our client base includes players from across all business verticals in over 150 countries worldwide.

You can edit or delete your press release Recombinant Vaccines Market To Surpass US $1.3 Bn Threshold By 2025, With North America Positioned As Growth Engine - Coherent Market Insights here

04-22-2019 | Health & Medicine
Market Density
Global Recombinant Factor VIII Market Research Report
This report studies the global Recombinant Factor VIII market status and forecast, categorizes the global Recombinant Factor VIII market size (value & volume) by manufacturers, type, application, and region. This report focuses on the top manufacturers in North America, Europe, Japan, China, and other regions (India, Southeast Asia). The major manufacturers covered in this report Shire (Baxter) Bayer CSL Pfizer Biogen Octapharma NovoNordisk Geographically, this report studies the top producers
03-11-2019 | Health & Medicine
Market Density
United States Recombinant Vaccine Market Report
In this report, the United States Recombinant Vaccine market is valued at USD XX million in 2017 and is expected to reach USD XX million by the end of 2025, growing at a CAGR of XX% between 2017 and 2025. Geographically, this report splits the United States market into seven regions: The West Southwest The Middle Atlantic New England The South The Midwest with sales (volume), revenue (value), market share
11-19-2018 | Health & Medicine
Coherent Market Insights - Biotechnology
Recombinant DNA Technology Market -
Recombinant DNA technology has allowed the transfer of desired characteristics which is useful to improve the existing systems by controlling expression of target genes. Recombinant DNA technology allows mass production of therapeutic proteins, which are characterized by high level of consistency and stability. The technology has multidisciplinary applications and potential to deal with important aspects of life, for instance, improving health, and enhancing food resources. The genetically modified plants have
09-06-2018 | Health & Medicine
Coherent Market Insights
Global Human Recombinant Insulin Market – Industry Insights
Discovery of insulin is considered to be one of the most important events in the history of the diabetes treatment. Furthermore, major advances in human insulin technology is the synthesis of human insulin analogue by recombinant technology. Currently, human insulin delivery system available for the administration of insulin include insulin syringes, insulin pumps, jet injections, and pens. Key players are focused on developing recombinant human insulin instead of animal-based insulin,
08-27-2018 | Health & Medicine
Coherent Market Insights
Global Human Recombinant Insulin Market – Industry Insights
Various government and private research organizations are engaged research and development activities for developing advanced treatment in diabetes care to increase the effectiveness of human insulin, reduce diabetes burden, and minimize the risk of diabetes associated disorders such as diabetes-associated blindness, kidney disease, heart attacks, strokes or limb loss. For instance, American Diabetes Association (ADA) invested US$ 807.4 million in more than 4,700 research projects in diabetes research since 1952
08-16-2018 | Health & Medicine
Coherent Market Insights
Recombinant Vaccines Market Industry Forecast till 2025
Recombinant vaccines are produced by using recombinant DNA technology or genetic engineering for the prevention of lethal diseases in human beings and animals. Recombinant vaccine is a biological preparation that provides active acquired immunity against a certain disease. Whereas individual being vaccinated produces antibodies against the protein antigen that protect a person from contracting the disease upon attack from the pathogenic microorganism. These vaccines functions on the immune response for
Comments about openPR
Your portal is fast, simple, and easy to use. Others may have more functions but they also demand more editing time, you have to preformat the text in order to achieve a good result etc. I think openPR is really fantastic!
Andreas Knepper, wallmedien AG