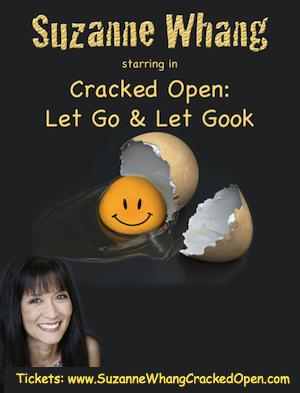 On February 5 at Beyond Baroque in Venice, CA, Suzanne Whang opened her one woman show "Cracked Open" before a sell-out crowd. You can buy tickets to the remaining show at http://www.suzannewhangcrackedopen.com.Cracked Open radically and comically dissect issues of race, culture, gender and politics, and addresses the actress's ongoing journey with Stage 4 metastatic breast cancer. This funny and autobiographical show received a standing ovation from an audience comprised primarily of Hollywood industry insiders and their guests. In describing Suzanne Whang's performances in 2011 where she revealed her ongoing journey with breast cancer, Judd Nelson said "Suzanne is that rarest of birds: a beauty of great intelligence and humor, whose character and courage serve as healing tonic to us all."Laraine Newman, Saturday Night Live and Founding member of The Groundlings, said "Cancer should never have picked a fight with Suzanne. She called it out and kicked it in the balls....but in a funny way." In 2011 Suzanne Whang revealed her five year journey with metastatic breast cancer in a series of performances. Her insights about life, love, beauty and truth, and her revelations about secrecy, struggle and strength have been called powerful, transformative and liberating.Suzanne's stand-up has been compared to Lenny Bruce, Richard Pryor, George Carlin, Lucille Ball, and Andy Kaufman. She has been a regular performer at the Improv in Las Vegas and Lake Tahoe, and she has headlined at comedy clubs all over the U.S. and Canada. Suzanne's slogan for her comedy act is: “Don't judge a gook by her cover.”Suzanne was also the host of "House Hunters", the #1 rated show on HGTV (Home & Garden Television Network) for almost ten years, and she also hosted the hit spinoff show, "House Hunters International". In 2011, shortly before undergoing hip replacement surgery, Suzanne co-hosted the Emmy award winning live coverage of the Academy Awards for Oscar.com with Dave Karger of Entertainment Weekly. As an actor, Suzanne has appeared in numerous television series, including four seasons as Polly the hilarious spa manager on NBC's "Las Vegas", and she recently completed a 6 week stint on ABC's "General Hospital" as Carol Cheng, the funny and loathsome wedding planner. You may also have seen Suzanne in co-starring roles on "Two & a Half Men", "Boston Legal", "Still Standing", "Criminal Minds", "Nip/Tuck", "The Practice", "Strong Medicine", "Robbery Homicide Division", "Norm", and "NYPD Blue" and in the feature film Constantine starring Keanu Reeves.For more information on Suzanne Whang, visit www.suzannewhang.com.Eve Brandstein, producer, director, writer and renowned for her early career as head of casting for Norman Lear; "Who's The Boss", "Facts of Life", "One Day at a Time," "Diff'rent Strokes", "Square Pegs", "Fernwood Tonight", etc., is producing and directing Suzanne Whang in "Cracked Open"Eve was a NY theater director when she made her debut as a filmmaker as part of AFI's prestigious Directing Women's Workshop. Besides "contracting and discovering" several major Hollywood stars, she will be forever famous for casting the rock'n'roll parody "Spinal Tap". She has an extensive list of credits as a writer, executive producer and director in television and independent film. Recently she co-produced and co-directed 13 episodes of "John Waters Presents Movies That Will Corrupt You".She is a psychotherapist, professor, published author, poet and curator of the legendary bi-costal spoken word series "Poetry In Motion" since 1988. The series is presently ongoing at Beyond Baroque in Venice, CA.In 2011, Eve returned to her original love of theater directing Jewish Women's Theater, "Stories From the Fringe" at the Museum of Tolerance, and this past summer the original production of "Revisiting Wildfire" at the Odyssey Theater, which will premiere June 1, 2012 at the Arclight Theater in NY.For more info about Eve Brandstein visit evebrandsteinproductions.com.High Value Viral Media promotes celebrity media and entertainment worldwide. For more information visit us online.High Value Viral Media 2629 Main St. #163 Santa Monica CA 90405 www.HighValueViralMedia.com

05-27-2021 | Business, Economy, Finances, B …
BookBuzz.net
Suzanne Skees & Sanam Yusuf Release New Self-Help Book - MY JOB Gen Z
Suzanne Skees & Sanam Yusuf Release New Self-Help Book - MY JOB Gen Z Suzanne Skees & Sanam Yusuf are pleased to announce the release of their new book, MY JOB Gen Z: Finding Your Place in a Fast-Changing World. Released by the Skees Family Foundation in March 2021, the book is already receiving rave reviews from readers and reviewers. Nonfiction business/career studies, sociology of work, real-life vignettes of young people at
05-07-2018 | Fashion, Lifestyle, Trends
Black Card Books
Suzanne Duncan Launches New Book Aiming to Inspire Single Parents
Author Suzanne Duncan announces availability of her newly published book in an official launch event set on May 20th at Eltham, Victoria in Australia. The journey of single parenthood is difficult and challenging to many. Daily, single parents encounter serious challenges as they try to raise their families. Sometimes they have no one to turn to for inspiration and advice. Author and coach Suzanne Duncan has provided insights that single parents
09-26-2011 | Arts & Culture
High Value Viral Media
Suzanne Whang to Reveal her Breasts at Breast Cancer Benefit & Auction September …
Suzanne Whang, perhaps best known for hosting HGTV's House Hunters and her thought-provoking and hilarious stand-up comedy chararacter Sung Hee Park, will be auctioning off framed topless photos at the benefit auction to be held in her honor on September 24. Speaking about the unusual works of art, Suzanne said, "Recently, I realized that trying to keep this stage IV metastatic breast cancer secret was literally killing me. So
04-01-2011 | Business, Economy, Finances, B …
Adelphi University
Adelphi to Host Acclaimed Author and Business Journalist Suzanne McGee
Adelphi University is pleased to host a book discussion with Suzanne McGee, author of Chasing Goldman Sachs. The event will take place on Monday, April 18, 2011; at 1:00 p.m. in room 109 of Adelphi’s Hagedorn Hall of Enterprise, 1 South Avenue, Garden City, NY. Limited space is available and pre-registration is required. In Chasing Goldman Sachs, Ms. McGee provides an incisive look at the forces that transformed Wall Street from
01-24-2011 | Business, Economy, Finances, B …
Becoming Human Again
Becoming Human Again by Suzanne Meier
Born in Switzerland, Suzanne has lived in six countries, but for most of her life in the United States. After being caught in an act of war and experiencing a near-death experience in Sri Lanka, she began an in-depth search for truth, healing, and spiritual awakening. Atlanta, GA, January 24, 2011 -- "A brilliant and scathing expose of the factors in modern society that enslave us both mentally and physically…You will
09-01-2010 | Arts & Culture
BookSwim Online Book Club
‘Mockingjay’ Author Suzanne Collins Honored with First Booksie Award
Not every author is the cliché quiet introvert who has little online marketing expertise. Suzanne Collins, who wrote the Underland Chronicles and The Hunger Games, has won the first BookSwim.com Booksie Award for her marketing success of new young-adult title, Mockingjay.  Collins is honored for her exciting embrace of internet technology at a time when so many publishers are ambivalent about it. The Booksie Award was created to honor all types
Comments about openPR
We publish our press releases on openPR.de because we like people who are "open" - just like us.
Frank Obels, CEO, INCONET - Informationssysteme, Communication und Netzwerkberatung GmbH