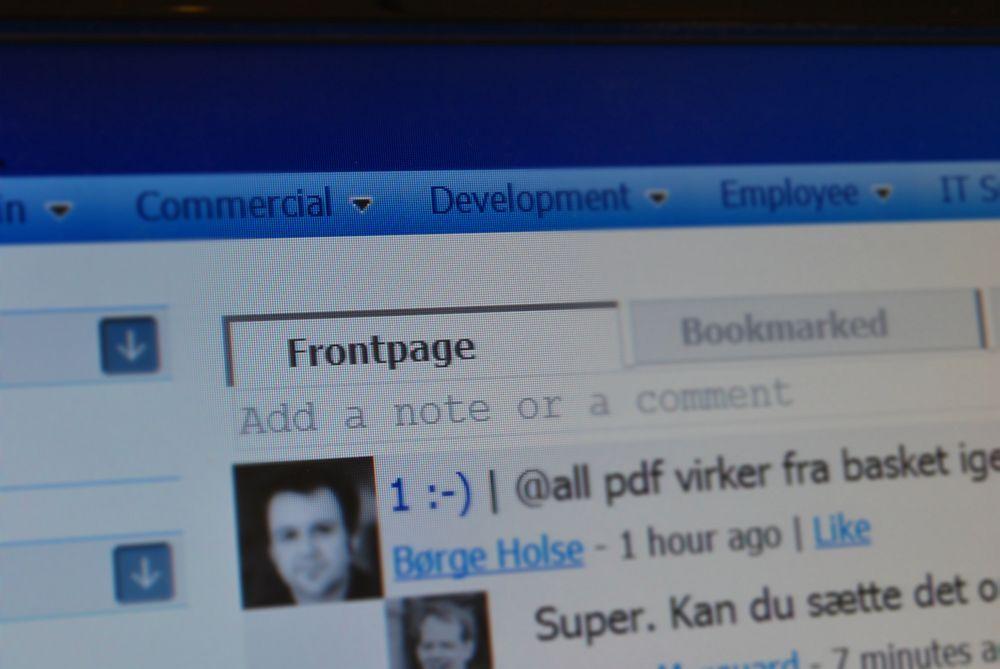 Screenshot of activity stream in Exformatics ECM - the replacement for emails

Software developer Exformatics are to abolish internal emails. Inefficiency and lack of knowledge sharing put more emphasis on social media, mobile applications and digital workflows and task.New Year’s resolutions normally concerns exercise, weight loss and a farewell to bad habits. At Exformatics, January sees an end to the long electronic email conversations, an ocean of more or less irrelevant cc emails and short, untimely reminders via the disliked form of communication. The software company, specialising in solutions for knowledge sharing, will reward the employees that are able to keep fingers away from the send-button.”We spend a disproportionate amount of time reading, contemplating and answering emails, that could have been dealt with far more rapidly and more efficiently face to face, in the activity stream or via the designated task concept in our intranet solution. We want to get rid of internal emails. Externally, we have to use email for communicating with customers and suppliers – at least for now,” Morten Marquard, CTO in Exformatics says.The substitute for internal emails is activity streams – the business oriented equivalent of statuses in e.g. Facebook, Google+ and other social media. The activity stream is central in the solution for intelligent Enterprise Content and information Management that is used by the employees. Instead of filling up individual inboxes with notes, questions, tasks, these can be shared on a specific activity, case or project. This way, employees with already full schedules get rid of context switching and interruptions from email popups.”To use a cliché, we have taken our own medicine. But we must show that communication can be more structured and targeted. In our experience, too many emails can be categorised somewhere between FYI and actual tasks. Now everyone in the organisation demands more efficient communication at the right time and in the right context so the recipient has no doubts about what is expected from the sender,” Morten Marquard continues.Number of emails goes down, quality of content increasesDuring the socalled #Noemail January, the employees in the software development company has managed to decrease the total number of emails by 55%. At the same time, the number of posts in the activity stream rose by less than that, putting emphasis on the greater focus on the information put forward to the colleagues. The largest single decrease was found in the management. CTO Morten Marquard managed to cut the amount of emails to 1/3 compared to November 2011. “We were unable to understand how the amount of internal emails had become so huge. Our own project management solution leverages built-in platforms for communicating, but too much communication lives in a parallel world to the project management – in the email applications. This way, much better information is delivered in the right context, and our experiment shows, that the amount of less irrelevant information is smaller,” Morten Marquard says.Interviews with the employees show that the workers were skeptical when the #noemail January campaign was announced. But 31 days with more consideration before hitting the ‘send’ button have proven worthwile.“The reactions went from skeptical to applauding. Emails used to take too much time and several regards the unread emails in Outlook as stressful. If this campaign can help eliminating that feeling, then our work is done,” CTO Morten Marquard says.About Exformatics Exformatics is a supplier of standard software for intelligent Entreprise Content and Information Management. Our solution enables companies to organise and access activities and information and digitises business processes. It provides a unique information overview and a platform to help increase the efficiency of the employees and support the cooperation between departments and even organisations. Exformatics ECM builds on Microsoft SharePoint and integrates with Microsoft Office, Outlook and much more.Learn more about Exformatics at www.exformatics.comExformatics, Bo Skovfoged, Head of Communications, Lautrupsgade 13, DK-2100 Copenhagen phone: +45 7020 9051, mobile: +45 3110 1976, e-mail: bs@exformatics.com