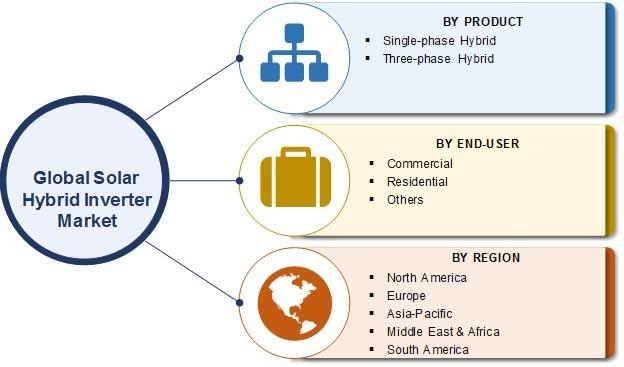 However, the growing competition amongst solar hybrid inverter manufacturers, stringent environment regulations, and government initiatives & related policies supporting solar energy generation have encouraged the manufacturers to design a product adhering to the government regulations across the globe, which leads to the growth of this market.

Nowadays, the focus of End Users has been shifting from traditional inverters to solar hybrid inverters as the latter are connected to batteries and can simply switch to an off-grid mode temporarily and continue to power end-use applications. Furthermore, technological advancements, growing awareness from the key manufacturers in reducing the carbon footprints, incentives and subsidies provided by federal governments for setting up solar power plants globally, and the low maintenance cost are expected to add to the growth of the solar hybrid inverter market.

The global Solar Hybrid Inverter Market has been segmented based on product and End User.

By End User, the market is segmented as commercial, residential, and others. The commercial segment is poised to grow with the highest CAGR during the forecast period as these kind of solar hybrid inverters are unique in its ability to control the performance of the PV panels in the wide range of applications within commercial applications.

Based on region, the global market for the solar hybrid inverter is classified into North America, Europe, Asia-Pacific, the Middle East & Africa, and South America.

North America is estimated to witness the highest growth in solar hybrid inverter market during forecast period owing to growing demand for environment-friendly solar devices in the region. The growth is attributed to the rise in demand for inverters which could convert direct current solar power into alternating current efficiently and cost-effectively.

The market in Europe is growing due to stringent environment norms and the growing transition towards solar energy. In Europe, Germany is the largest and fastest growing market in solar hybrid inverter Market, whereas the UK, France, Italy, Spain, Sweden, and the Netherlands are the other major countries that contribute in the growth of this market.

In the Middle East & Africa market, Saudi Arabia is the largest market for solar hybrid inverter. Iran and South and East Africa growing at high rates have a major contribution in the growth of solar hybrid inverter market due to the increasing penetration of solar photovoltaic technology across these countries. In South America, Brazil is the largest and fastest growing country, playing an important role in this market.