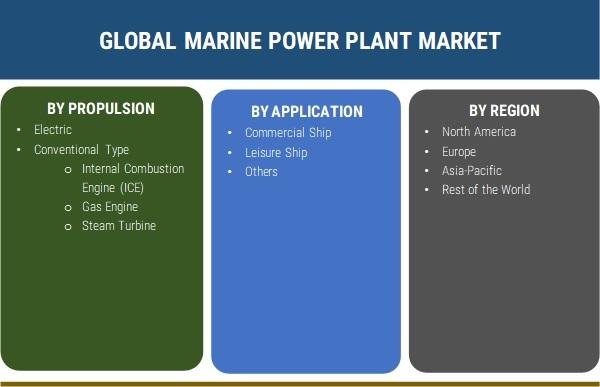 Global Marine Power Plant Market HighlightsMarine power plants, also known as power ships, are special purpose marine fleets, wherein a power plant is installed to act as a power generation resource. Marine power plants are also operating on low cost fuels, such as HFO, and natural gas, to ensure cost-effective electricity generation. Power ships can be developed into existing normal marine vessels in a time period of around 3-4 months as per the client’s requirement. Marine power plant can be equipped with single or multiple gas turbines, diesel and gas engines, fluidized bed boilers or nuclear reactors for electricity generation.Get Free Sample Copy @ https://www.marketresearchfuture.com/sample_request/8349Strict industry regulations, lack of skilled professionals, volatile fuel prices, the high initial prices and maintenance costs associated with marine power plant act as the restraining factors for the growth of global market during the forecast period. However, the growing use of automation for controlling and monitoring engine performance, technological advancement in marine power plant, and improving market in developing regions provide growth opportunities for the key players operating in the global market, which in turn drives the growth of global market between 2019 and 2025. Thus, the global marine power plant market is expected to have projected CAGR of 4% during the forecast period.Prominent PlayersThe leading players operating in the global marine power plant market are Caterpillar Inc. (US), Cummins (US), Hyundai Heavy Industries Co., Ltd. (South Korea), Doosan Infracore (South Korea), Fairbanks Morse (US), Hydraulic Marine Systems Inc. (US), Masson Marine (France), Samsung Heavy Industries (US), Siemens AG (Germany), Mercury Marine (US), MAN Energy Solution (Germany), Mitsubishi Heavy Industries, Ltd. (Japan), Rolls-Royce plc (UK), Wärtsilä Oyj Abp (Finland), and DAIHATSU DIESEL MFG. CO., LTD. (Japan).Marine Power Plant Market Segmental Analysis:The global marine power plant market is segmented based on propulsion, application, and region.By propulsion, the global market is segmented into electric and conventional type. Whereas, the conventional type segment is further divided into internal combustion engine (ICE), gas engine, and steam turbine.By application, the global market is segmented into commercial ship and leisure ship, and others. Regional OutlookIn terms of region, the global market for marine power plant is segmented as Asia-Pacific, Europe, North America, and the rest of the world (RoW), which includes the Middle East & Africa and South America. In 2018, the global marine power plant market was led by the Asia-Pacific region followed by Europe, North America, and RoW. Furthermore, the market in Asia-Pacific is anticipated to grow at a rapid pace during the forecast period due to an increase in foreign investments for the development of power plants across the region and growing consumption of natural gas.Additionally, the developing manufacturing sector in China, Indonesia, Thailand, India, and Japan also is also leading to the market growth in the region. On the other hand, North America is one of the fastest growing regions after Asia-Pacific and rest of the world during the forecast period. This growth is attributed to the growing maritime industry and presence of key players such as Caterpillar Inc. and Cummins across the region. Whereas, the US is the larger contributor in the North America market and is projected to grow at a faster rate than Canada over the forecast period due to growing commodity trade in the US.The presence of developed countries such as France, Germany, Italy, and Spain contribute in the growth of this market in the Europe. In Europe, the UK is anticipated to grow at a moderate rate from 2019–2025 due to growing investment for the development of commercial scale power plants across the country. The Middle East & Africa and South America are the major contributors for the growth of marine power plant market in the rest of the world. In the RoW market, the Middle East & Africa (MEA) is expected to hold the larger share than South America during the forecast period due to growing production and export of crude oil and natural gas from Iran, Iraq, and Saudi Arabia to India and China. Whereas, the market in South America is growing at faster rate during the forecast period due to the presence of developing countries such as Brazil and Argentina Furthermore, the growing establishment of new shipyards across the region.Get Complete Report Details at: https://www.marketresearchfuture.com/reports/marine-power-plant-market-8349Contact:Market Research Future +1 646 845 9312 Email: sales@marketresearchfuture.comAbout Market Research Future:At Market Research Future (MRFR), we enable our customers to unravel the complexity of various industries through our Cooked Research Report (CRR), Half-Cooked Research Reports (HCRR), Raw Research Reports (3R), Continuous-Feed Research (CFR), and Market Research & Consulting Services.