Sealegs Switches It Up, with Style and Comfort 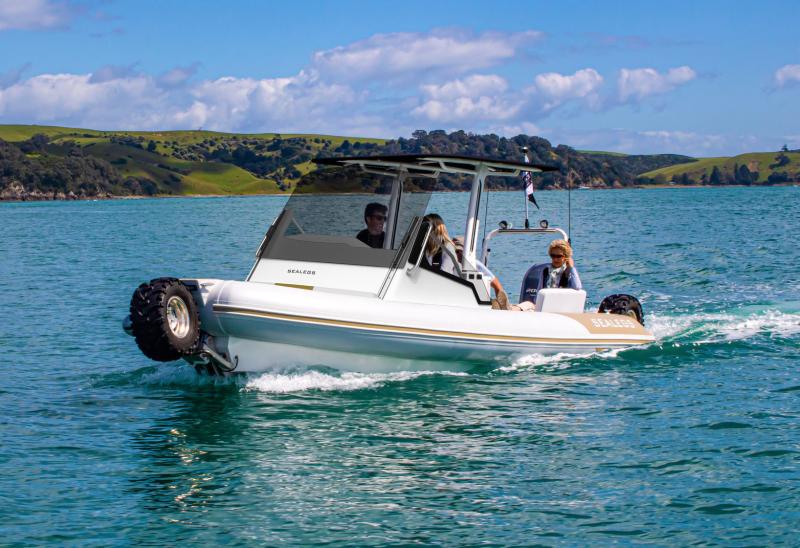 Extending its range of amphibious boats, Sealegs has announced the launch of a new model, the 7.5m Semi-Cab amphibious RIB, to be debuted at the Auckland Boat Show in October 2020. Building on the new Sealegs 7.5m amphibious RIB platform, the new model protects passengers from wind and weather, increasing their comfort and protection.A feature on the 7.5m Semi-Cab is the new electric windscreen which can be extended or retracted to suit weather conditions. In difficult conditions the windscreen extends upwards 350 mm to provide maximum protection for the operator and passengers and in good conditions the windscreen can be lowered. The electric windscreen was designed to look pillarless to maintain visibility whilst in use and the oceans panoramic views when in an anchored position. The new Semi-Cab model transforms the existing 7.5m centre console to a full-width, super wide, wrap-around console with extendable windscreen and offset steering. With the flick of an electric switch, the windscreen extends upward. This increases the personal envelope of comfort and provides protection from the elements regardless of being underway or anchored into the wind. The Semi-Cab retains the sleek styling and superior on-water performance that all Sealegs 7.5m RIBs enjoy.The new craft will be displayed at the Auckland Boat Show in October and is expected to be available internationally in 2021. The new model has been inspired by the feedback of customers who want a Sealegs amphibious RIB that can keep the family warm and dry in adverse conditions but can also enjoy finer weather to its fullest. Sealegs CEO David McKee Wright said "Around the world Sealegs owners seek to maximise their time on the water without compromise. The full-width windscreen provides panoramic views in either its extended or retracted positions, and allows enjoyable boating regardless of weather” David went on to say “It is a model I am personally excited to share with my family and friends during the year-round boating we enjoy in the Hauraki Gulf.” Sealegs has sold more than 1500 amphibious craft in over 50 countries worldwide. Sealegs is the creator and the leader of the amphibious production boat industry, and the company continues to push the boundaries in both recreational and commercial amphibious boats.Sealegs International Ltd. PO Box 303221, North Harbour 0751 Auckland, New Zealand David McKee Wright CEO Sealegs International Ltd E: david@sealegs.com T: +64 (0)292 777 444Based in Auckland, New Zealand, one of the marine capitals of the world, and founded by local co-founders Maurice Bryham and David McKee Wright, Sealegs has been constantly pioneering the way forward for amphibious boating since the first Sealegs came off the production line in 2004. All Sealegs are proudly designed and made in New Zealand.

You can edit or delete your press release Sealegs Switches It Up, with Style and Comfort here

07-30-2020 | Leisure, Entertainment, Miscel …
Sealegs International Ltd.
Sealegs Ships 1500th Amphibious Craft
Sealegs International announced it has shipped its 1500th amphibious boat. The shipment was to British adventurer Bear Grylls, making it the third Sealegs boat Bear Grylls has purchased. The delivery was celebrated by Sealegs, further securing its position as the largest amphibious boat company in the world. Sealegs pioneered the amphibious production boat market. Over the last 15 years it has grown from nothing to what is now a significant and

06-05-2019 | Advertising, Media Consulting, …
Market Research Report Store
Automated Gates Market Size, Share, Development by 2024– Top Key players like …
Market Research Report Store offers a latest published report on Automated Gates Market Analysis and Forecast 2019-2025 delivering key insights and providing a competitive advantage to clients through a detailed report. This report focuses on the key global Automated Gates players, to define, describe and analyze the value, market share, market competition landscape, SWOT analysis and development plans in next few years. To analyze the Automated Gates with respect to individual growth
08-15-2018 | Industry, Real Estate & Constr …
ASIS Boats
Get Direct Beach Access Gracefully with The ASIS Beachlander RIB
The soon-to-be delivered 8.75M ASIS Boats Beachlander to a Luxurious Hotel in Costa Rica is ideal for hotels guests. The Beach Lander RIB makes boating accessible to anyone to come onboard and enjoy a boat ride. As a result, it allows its users to reach the most remote areas and approach shallow waters in safety and comfort. Once the shore is reached, the users can walk down from the boat
04-11-2018 | Business, Economy, Finances, B …
Market Research Hub
Global Rib Knitting Machine Sales Market Trends, Analysis, Players & Forecast by …
An up-to-date research report has been disclosed by Market Research Hub highlighting the title “Global Rib Knitting Machine Sales Market Research Report 2018” which provides an outlook of current market growth as well as the expected forecast including Rate on Investment (ROI) together with growing CAGR near XX% during 2018-2025. The report studies Rib Knitting Machine in global market, especially in North America, China, Europe, Southeast Asia, Japan and India,
11-20-2017 | Industry, Real Estate & Constr …
ASIS Boats
Introducing the flat foam push bow Rigid Inflatable Boat (RIB) by ASIS
ASIS Boats, once more comes up with a great innovation for marina operators, a special rigid inflatable boat with a flat foam push bow and a bow pull post, in order for the marina operators to be able to maneuver mega yachts and big yachts in case of distress or high wind, to assist them to moor safely. This specially customized Marina Operations Rigid Inflatable Boat was delivered to Meraas Holding
08-08-2017 | Advertising, Media Consulting, …
Spire Market Research
Automatic Barriers Market Outlook 2017 Avon Barrier, Entrematic, Frontier Pitts, …
Automatic Barriers Market Research 2017 A market study ” Global Automatic Barriers Market ” examines the performance of the Automatic Barriers market 2017. It encloses an in-depth Research of the Automatic Barriers market state and the competitive landscape globally. This report analyzes the potential of Automatic Barriers market in the present and the future prospects from various angles in detail. The Global Automatic Barriers Market 2017 report includes Automatic Barriers market Revenue,
04-12-2017 | Sports
Worldwide Business
Global Lacrosse Rib Pads Market 2017 : Shock Doctor, Warrior, Brine, Gait, Nike, …
A market study based on the "Lacrosse Rib Pads Market" across the globe, recently added to the repository of Market Research, is titled ‘Global Lacrosse Rib Pads Market 2017’. The research report analyses the historical as well as present performance of the worldwide Lacrosse Rib Pads industry, and makes predictions on the future status of Lacrosse Rib Pads market on the basis of this analysis. Get Free Sample Copy of Report
Comments about openPR
Your portal is fast, simple, and easy to use. Others may have more functions but they also demand more editing time, you have to preformat the text in order to achieve a good result etc. I think openPR is really fantastic!
Andreas Knepper, wallmedien AG