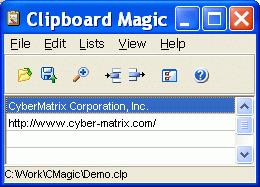 CyberMatrix has released version 5 of Clipboard Magic, a freeware Windows clipboard manager for plain text. This latest release contains several important new features to make copying and pasting text easier and more efficient. Clipboard Magic users can end up with many clips in one list that are difficult to differentiate between. For example, a technical support analyst using Clipboard Magic can have many similar canned responses that are hard to keep track of. Two new features in Clipboard Magic 5 can greatly help with this problem. In the new version, clips can now be assigned a short descriptive label to make particular clips easier to find in a long list. Users can now also color-code clips to quickly visually organize the clips into different types. Previous versions of Clipboard Magic allowed users to translate the text labels into their own language. A big problem though was that text of multi-byte languages such as Chinese, Japanese and Russian did not show up properly in the clip list display grid. With the complete Unicode support added to version 5, the display grid now fully supports all multi-byte languages. The new backup and restore features enable recovering important clip data after a hard drive crash and help facilitate switching to another computer.Clipboard Magic can greatly improve the productivity of those that spend a lot of time cutting and pasting repetitive text. By default any plain text copied to the Windows Clipboard is automatically stored in Clipboard Magic. The text can range from a single line to several pages. At the click of the mouse any item in the stored clip list is automatically copied back to the Windows Clipboard allowing you to paste the text in any document or web form. Features include text drag and drop between other Windows applications, search and replace, series paste hotkeys and clip sorting. Clipboard Magic also has multi-language capabilities.Clipboard Magic runs on Windows ME, XP, 2003 Server, Vista, 2008 Server and Windows 7.Clipboard Magic is free and contains no adware or spyware. The latest version can be obtained free of charge from http://www.cybermatrix.com.Specializing in time management software for appointment scheduling, meeting scheduling, class scheduling, employee scheduling, project time recording, timesheet entry and attendance management.CyberMatrix Corporation, Inc. 3104-30th Ave Suite #224 Vernon, B.C. V1T 9M9

You can edit or delete your press release Clipboard Magic 5.0 Released here

09-02-2013 | IT, New Media & Software
Actual Tools
Actual Window Manager 8.0 Sets New Standard for Comfort with Enhanced Support fo …
Actual Tools announces a long awaited version 8.0 of the award-winning Actual Window Manager tool. Featuring a clipboard template library and enhanced window control functions extended to MDI windows, the new version introduces even more convenience in everyday work. It is hard to underestimate the importance of everyday convenient work. Statistically, a surprisingly big portion of time is spent on such repeating supplemental actions as arrangement of windows, clipboard manipulations and
12-17-2012 | IT, New Media & Software
Falcongaze
SecureTower 3.2 – clipboard and USB-devices full control
Falcongaze Company has completed a key stage of development of functionality for external devices control in SecureTower data protection system. Starting with the current version, the system monitors USB-devices (flash drives, portable hard drives, etc.), as well as workstations clipboard. According to statistics, about 40% of intentional theft occurs exactly by means of the data transfer to a various external USB devices. They are compact, easy to handle and are perfect
09-13-2012 | IT, New Media & Software
INFONAUTICS GmbH
Print Directory Structure, Copy to Clipboard and Eport into Word, Excel or HTML …
There are always situations in which a file list should be created in no time, a directory structure printed or a folder list exported to Excel. Depending on the requirements, the Windows Explorer will not suffice and an alternative is needed. The software tool Directory List & Print Pro, developed by Infonautics GmbH, is very helpful here and due to the many features offered by this software nearly any demand will
01-18-2011 | IT, New Media & Software
Infonautics GmbH
Print the directory structure and folder contents easily, copy to clipboard and …
There are different possibilities to print the directory tree and folder list. There is either the option to do it by a command line instruction or to use an additional software tool. Fast, easy and useful support hereto provides the software "Directory List & Print Pro". Upon a successful launch of the freeware "Directory List & Print" Infonautics GmbH has now put an advanced Pro version as shareware on
11-05-2009 | IT, New Media & Software
Bartels Media
New Multi Monitor Technology adds a DVI input to Laptops
Bartels Media GmbH has released MaxiVista v4, a software-only solution for turning any spare PC into a dual monitor for any Desktop PC. MaxiVista enables users to place windows on multiple screens, as if one huge screen is used. The application increases the display area to open more program windows to increase the productivity. The Multi Monitor software can also be used to control up to four computers with a single
07-19-2007 | IT, New Media & Software
Scand
Scand Released New Version 1.4 of dhtmlxGrid with Improved Performance and Cross …
Scand released a new version 1.4 of dhtmlxGrid, an Ajax-enabled JavaScript grid with complete functionality and ability to work with any server-side technology including PHP, ASP, ASP.Net, Java and Rails. The main enhancements include auto-resizing feature, clipboard support for FF, improved Safari compatibility and new advanced cell-editors. Minsk, Belarus, July 19, 2007 - Scand announced the update of its Ajax web ui component dhtmlxGrid to version 1.4. dhtmlxGrid is a
Comments about openPR
Your portal is fast, simple, and easy to use. Others may have more functions but they also demand more editing time, you have to preformat the text in order to achieve a good result etc. I think openPR is really fantastic!
Andreas Knepper, wallmedien AG