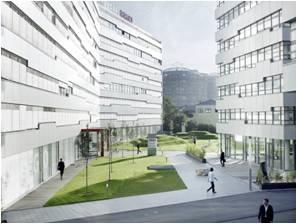 Austrian company Otis GesmbH to lease 2,500 square metersHOCHTIEF Development Austria, a subsidiary of HOCHTIEF Projektentwicklung, has let a further 2,500 square meters at the Marximum Business Park in Vienna. Otis GesmbH, part of the world’s biggest manufacturer of elevators, moving staircases and moving sidewalks, will be relocating its Austrian headquarters to the “green building” in Erdberger Mais, close to the gasometer, in early 2012. The Marximum Business Park comprises five solitaire buildings, four of which already have 80 percent occupancy. Other tenants include the ERGO insurance group, a unit of Telekom Austria Personalmanagement, NICHICON, Gigaset, Arval (BNP Paribas Group), Trilux and Wincor Nixdorf. In addition, the Gourmet Group is using an area of 1,000 square meters to operate a daytime restaurant with freshly-made food for up to 320 patrons. The fifth building is to be sold in its entirety as a corporate headquarters. The Marximum Business Park was already recognized by the Austrian Energy Agency as a green building in 2009 and received the German Sustainable Building Council’s Certificate in Silver from its Austrian counterpart, the ÖGNI in 2011.HOCHTIEF is one of the leading international providers of construction-related services. With more than 70,000 employees and a sales volume of EUR 20.16 billion in FY 2010, the company is represented in all the world’s major markets. The Group’s service offering in the fields of development, construction, services, concessions and operation covers the entire life cycle of infrastructure projects, real estate and facilities. In the USA, the biggest construction market in the world, HOCHTIEF is the No. 1 general builder via its subsidiary Turner and, with Group company Flatiron, ranks among the most important players in the field of transportation infrastructure construction. With its subsidiary Leighton (HOCHTIEF share around 54 percent), the Group is market leader in Australia. Because of its engagement for sustainability, HOCHTIEF has been listed in the Dow Jones Sustainability Indexes since 2006. HOCHTIEF Solutions consolidates the core business of the HOCHTIEF Group in Europe and in selected regions worldwide. The company plans, develops, builds, operates and manages real estate and infrastructure facilities. HOCHTIEF Solutions is the management company of the Group’s Europe division which employed around 15,000 people around the globe in fiscal 2010. In many regions and segments, the company is a market and innovation leader. HOCHTIEF Projektentwicklung is a fully owned subsidiary of HOCHTIEF and organizationally related to HOCHTIEF Solutions. Since 1991 the company has been developing, realizing and marketing real estate projects in Germany and abroad and is considered Germany’s leading inner-city developer. Its core business comprises office buildings in central business districts and areas within easy reach of city centers. It also focuses on retail properties, residential properties and accommodation for senior citizens, and the development of entire urban quarters. Hotels, distribution centers and special-purpose properties are also among the product market segments which the company addresses. HOCHTIEF Projektentwicklung does not build up any property portfolio of its own but operates as an “interim investor” with the goal of selling its projects to a final investor as swiftly as possible. HOCHTIEF Development Austria, a fully owned subsidiary of HOCHTIEF Projektentwicklung, was founded in 2006 in Vienna. The company develops, realizes and markets office buildings and retail properties in downtown locations and areas within easy reach of city centers.HOCHTIEF Solutions AG Alfredstrasse 236 45133 Essen Germany Gabriele Stegers Head of Communications Real Estate Solutions Tel.: +49 201 824-2282 Fax: +49 201 824-1728 Email: gabriele.stegers@hochtief.de Web: www.htp.hochtief-solutions.com

04-10-2013 | Industry, Real Estate & Constr …
HOCHTIEF Solutions AG
HOCHTIEF Projektentwicklung lets further offices at Hirschgarten in Munich
Around 42 percent of rental space at office and business center at the Am Hirschgarten urban development has been let—Completion at end of 2013 HOCHTIEF Projektentwicklung has let 3,000 square meters of office space at the forum am Hirschgarten complex in Munich to Müller-Boré & Partner: The patent and legal firm will be occupying two complete floors in the more southerly of the two buildings. Almost 40 percent of the office
02-15-2013 | Industry, Real Estate & Constr …
HOCHTIEF Solutions AG
Almost 80 percent of apartments sold at Frankfurt’s Holbeinviertel
Four of five construction phases almost entirely sold in Sachsenhausen—one-third of first phase already occupied The HOCHTIEF Solutions residential developer formart and Wilma Wohnen Süd are building the Holbeinviertel residential quarter in Frankfurt-Sachsenhausen. 196 residential units are to be created in five phases on a former freight railway lot with an area of around 27,600 square meters. 37 of the townhouses (79 percent) and 117 condominiums have already been sold. The
02-15-2013 | Industry, Real Estate & Constr …
HOCHTIEF Solutions AG
HOCHTIEF Projektentwicklung: About 75 percent of Munich smarthouse let
Leases signed for 16,650 square meters—office and commercial building with child day care center completed in September 2012 HOCHTIEF Projektentwicklung has concluded further leases covering a total of around 1,900 square meters for the smarthouse in Munich: Communications system provider Avaya has the biggest lease on 1,600 square meters. The software developer Gracenote will occupy 600 square meters, while recycling consultancy firm, Carpe Dies Consulting has a lease for 320 square
02-07-2013 | Industry, Real Estate & Constr …
HOCHTIEF Solutions AG
maxCologne office complex in Cologne-Deutz fully let on completion
Law firm GÖRG Partnerschaft von Rechtsanwälten secures last available floor with 2,000 square meters of office space HOCHTIEF Projektentwicklung has now fully let the maxCologne office complex in Cologne-Deutz in time for the foreseen completion date: The 38,500 square meters of rental space in the 22-story office block are to be handed over to Lanxess in early 2013. At the end of 2012 the business law firm GÖRG Partnerschaft von Rechtsanwälten

01-28-2012 | IT, New Media & Software
CURE – Center for Usability Research & Engineering
EU Project ECONAV Helps Plan Eco-Friendly Trips with Comfort
ICT Research Initiative aims to tailor trips for each traveller The European Commission is funding the project EcoNav – Ecological Aware Navigation – Usable Persuasive Trip Advisor for Reducing CO2 consumption, which is led by CURE – Center for Usability Research & Engineering, an independent Austrian research institute. In our highly globalized world, mobility and transport are becoming increasingly important. This has a strong environmental impact, in particular in urban areas. A
10-22-2011 | Advertising, Media Consulting, …
USECON - The Usability Consultants GmbH
Experience Worlds – the vital competitive advantage
Experience Worlds – it’s not only about shopping and wellness Today’s experience worlds are no longer limited to theme parks, shopping arcades or wellness temples. Different official departments such as the civil registry office, social entities like hospitals, kindergartens and schools as well as important centres of communications, railway stations or airports are facilities where customers collect experiences by getting in touch with one or multiple companies. These experiences influence the
Comments about openPR
Your portal is fast, simple, and easy to use. Others may have more functions but they also demand more editing time, you have to preformat the text in order to achieve a good result etc. I think openPR is really fantastic!
Andreas Knepper, wallmedien AG