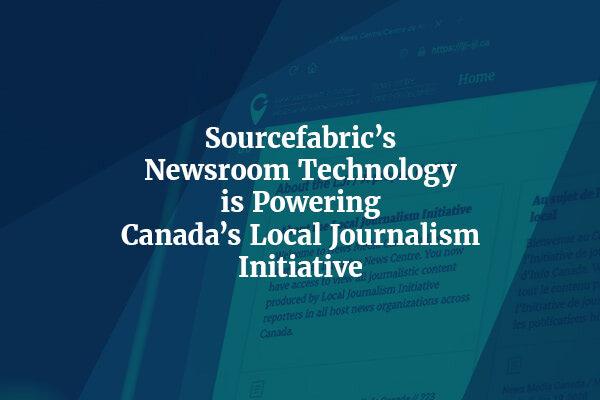 The Canadian Press, the national news agency of Canada, chose Sourcefabric as its technology partner to develop the publishing platform powering the Local Journalism Initiative (LJI), a five-year, CAD $50 million fund to support local reporting in the country’s news deserts.The LJI project uses Sourcefabric’s Newshub, a client-facing web portal, to deliver content to its subscribers. The content management system behind Newshub is a simplified version of Superdesk, Sourcefabric’s open-source headless CMS that runs some of the largest newsrooms in the world, including the Australian Associated Press (AAP), NTB, the Norwegian news agency, and the Belgian news agency Belga. “From the technology point of view, we knew that Superdesk and Newshub were being used by some of our peers, including AAP, and that it was rock solid,” says Andrew Lundy, Vice President, Digital at Canadian Press. The LJI is a federal government initiative that provides funding to seven not-for-profit organisations, which in turn award grants to local news outlets. The largest of these funds is administered by News Media Canada, an industry association working with The Canadian Press, the operational partner responsible for creating the portal and distributing the content.As the LJI portal, Newshub operates as a kind of local-content wire service: a central website for individual news outlets who are subscribers to browse LJI content and decide what to take for their own newspapers, both digital and print. Newshub is also the conduit connecting reporters and editors. Contributors log in to the back end, copy-paste their stories from their own systems, and submit. From there, they or their editors publish the stories to the LJI portal.Because the LJI project has created a network of external contributors filing content from dozens of news organisations across the country, its publishing solution needed to be web-based, accessible, bilingual and intuitive. The scaled-down version of Superdesk on the back end, coupled with the front end of Newshub, allows editors and reporters to upload, publish, and share their stories easily. “The main requirements for the LJI portal were that it should be robust, sturdy, reliable and simple,” says Gerry Arnold, Executive Editor at Canadian Press. “It should be easy to use for journalists filing stories and for editors to see the content relevant to them by region while also being able to flag interesting content from anywhere. The solution does that and it’s working well.”As in many countries around the world, Canada’s local news market is suffering. From 2008 to 2019, more than 250 news organisations closed, the majority of them smaller publishers. To stem the bleeding, the Canadian government created the LJI to provide grants to local newsrooms to hire reporters for a specific beat, such as indigenous issues, local government, or the environment.To date, more than 380 individual users have registered on the LJI portal, and twice as many more are expected to join over the course of the project. “With 200 grants awarded so far, we are already averaging about 2,500 stories a month and it won’t be a stretch to say it will reach 3,000 soon,” says Arnold. “Those are 3,000 stories that didn’t exist a year ago, and that are now benefiting Canadian journalism.”In addition to supporting the production of local journalism in English and French (Canada’s two official languages), the LJI project has added useful features to Newshub, including support for high-quality image downloads, secure sign-on for users, and the ability for editors to quickly unpublish and remove stories. Because Newshub is an open-source tool, these enhancements will be available to any newsroom using the software.“Providing the technological solution to LJI is a confirmation of our mission,” says Sava Tatić, Sourcefabric’s Managing Director. “When we started 10 years ago, we wanted to create robust open-source software that could strengthen journalism and empower underrepresented voices. Our work with LJI confirms that we have been on the right path.”Media Contact Anna Rohleder Head of Communications press@sourcefabric.org +420 222 362 540Salvátorská 10, 110 00 Praha 1Sourcefabric is Europe’s largest open-source software developer serving the news media industry. Headquartered in Prague, Czech Republic, Sourcefabric z.ú. is a nonprofit organisation that brings together journalists, business analysts, software developers, and communications professionals to create powerful tools that are open source. Sourcefabric’s products include Superdesk, professional live blogging tool Live Blog, and radio automation platform Airtime Pro.

07-18-2019 | IT, New Media & Software
Sourcefabric z.ú.
Sourcefabric launches initiative to help news agencies develop a common newsroom …
PRAGUE – To facilitate technological innovation within media organisations, nonprofit software developer Sourcefabric z.ú. has launched a new roundtable to help news agencies share development costs and improve the tools that deliver their journalism to clients. Called the Superdesk Wire Club, the forum will serve as a development steering committee for news agencies that use Superdesk, our open-source newsroom management solution. Through the club, members will identify features or functions
Comments about openPR
9 o'clock: discuss press release with client, 10 o'clock: submit release to openPR, within the briefest possible time release is published and displayed in a prominent place on openPR.de. I am thrilled!
Zehra Spindler, Calypso Now! - Communication Agency