What are the key market trends impacting the growth of the Semi-Autonomous & Autonomous Bus Market? 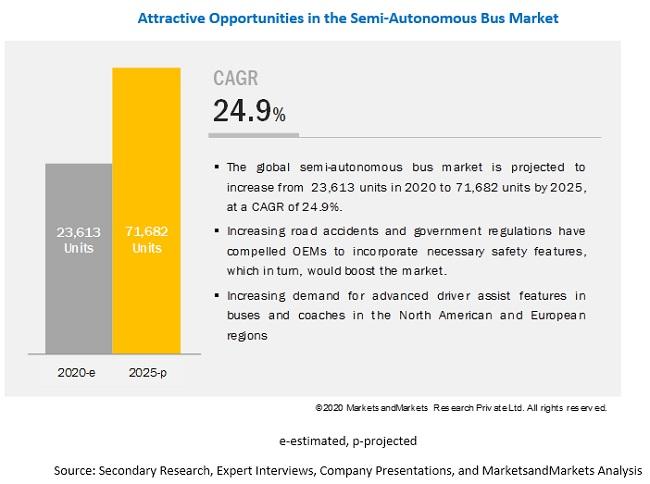 The global Semi-Autonomous Bus Market size is projected to reach 71,682 units by 2025, from an estimated 23,613 units in 2020, at a CAGR of 24.9%. The base year for the report is 2019, and the forecast period is from 2020 to 2025. The semi-autonomous bus sector has witnessed rapid evolution as governments across the world are regulating advanced safety features such as AEB and BSD, and OEMs are offering buses with modern driver-assist features.View Detail TOC @ https://www.marketsandmarkets.com/Market-Reports/semi-autonomous-bus-market-87328844.htmlThe global autonomous bus market size is projected to reach USD 2,773 million by 2030, from USD 791 million in 2024, at a CAGR of 23.2%. The forecast period is from 2024 to 2030. The autonomous bus technology is the evolution in the public transport industry, as it could be a viable solution to daily commuting and public transit gaps. Also, after the global pandemic of COVID-19, many OEMs and technology companies will be looking to develop small autonomous shuttles with less seating capacity to avoid crowded bus operations.OEMs worldwide are focusing heavily on research & testing applications leading to continuous advancements in autonomous buses. For instance, in October 2019, Local Motors announced the testing of its autonomous shuttle, Olli, in California. Similarly, in May 2019, New Flyer, one of the biggest bus manufacturers in the world, started a pilot program of testing autonomous driving technology in its full-sized bus. Also, Proterra, an American electric bus maker, has been testing autonomous driving in Nevada. These initiatives are expected to provide an impetus to the growth of the global semi-autonomous and autonomous bus market.Download PDF Brochure @ https://www.marketsandmarkets.com/pdfdownloadNew.asp?id=87328844 In the semi-autonomous bus market, by propulsion, the diesel segment is projected to dominate the industry during the forecast period in terms of volume. The rising demand for passenger safety and efficient bus transit operations would boost the sales of the diesel segment for the advanced semi-autonomous bus market during the forecast period. Favorable government regulations for better road safety would have a positive impact on the semi-autonomous bus market. For instance, AEB and BSD are expected to be mandatory for all types of vehicles, including buses. As the infrastructure for electric buses is insufficient in many countries, OEMs will be incorporating these features in the existing diesel-operated buses. With significant sales volume across the world and OEMs introducing new safety features, the diesel segment is expected to lead the semi-autonomous bus market. Also, continuous developments are being made to improve the emission and efficiency of diesel-powered vehicles.Request Free Sample Report @ https://www.marketsandmarkets.com/requestsampleNew.asp?id=87328844 Critical Aspects:• Governments are focusing on regulations related to safety standards in commercial vehicles. How will this transform the overall semi-autonomous bus market?• How will fast-paced developments in self-driving technologies change the dynamics of this market?• The industry is focusing on different sensors and software systems. Which are the leading companies working on it, and what organic and inorganic strategies have been adopted by them?• The shuttle segment is expected to have a significant market during the forecast. How will this transform the overall autonomous bus market?• Analysis of competitors, including major players in this market and ecosystem. The major players are Continental (Germany) Bosch (Germany), Aptiv (UK), AB Volvo (Sweden), and Denso (Japan). Speak to Analyst @ https://www.marketsandmarkets.com/speaktoanalystNew.asp?id=87328844MarketsandMarkets™ INC. 630 Dundee Road Suite 430 Northbrook, IL 60062 USA : +1-888-600-6441UK : +44-800-368-9399 sales@marketsandmarkets.comMarketsandMarkets™ provides quantified B2B research on 30,000 high growth emerging opportunities/threats which will impact 70% to 80% of worldwide companies' revenues. Currently servicing 7500 customers worldwide including 80% of global Fortune 1000 companies as clients. Almost 75,000 top officers across eight industries worldwide approach MarketsandMarkets™ for their painpoints around revenues decisions.

You can edit or delete your press release What are the key market trends impacting the growth of the Semi-Autonomous & Autonomous Bus Market? here

07-09-2020 | Advertising, Media Consulting, …
MarketsandMarkets™ INC.
Impact of COVID-19 on automotive lightweight material market?
The global Automotive Lightweight Material Market in the pre-COVID scenario was projected to grow from USD 85.2 billion in 2020 to USD 116.4 billion by 2025, at a CAGR of 7.4% during the forecast period. However, due to COVID-19, most of the countries have imposed a complete lockdown for almost more than two months, which, in turn, has impacted vehicle production. The automotive lightweight material market is estimated to observe
07-02-2020 | Advertising, Media Consulting, …
MarketsandMarkets™ INC.
What are the current and future trends in the plastics for electric vehicle mark …
The Plastic for Electric Vehicle Market is projected to grow at a CAGR of 26.9% to reach a market size of USD 2,621 million by 2025 from 797 million in 2020. The stringent emission standards coupled with automakers focus on weight reduction is driving the demand of plastics in electric vehicles. Additionally, the OEMs inclination towards thermally stable plastics is further anticipated to drive the demand of plastic in electric
06-18-2020 | Advertising, Media Consulting, …
MarketsandMarkets™ INC.
Automotive Piston Market by Component, Material and Piston Shape - Global Foreca …
The global automotive piston market size is projected to grow to USD 2.2 billion by 2025 from USD 1.9 billion in 2020, at a CAGR of 3.5%. Demand for high-pressure GDI pistons, lightweight piston components, and passenger car gasoline engines would drive the global automotive piston industry. With the engine downsizing and turbocharging, the popularity of gasoline direct injection (GDI) is increasing. GDI is being considered as one of
06-16-2020 | Advertising, Media Consulting, …
MarketsandMarkets™ INC.
What will be the acceptance scenario of mobility as a service market in the tran …
The report "Mobility as a Service Market by Service (Ride Hailing, Car Sharing, Station Based Mobility, Bus Sharing, Train), Solution (Platforms, Payment, Navigation, Telecom Connectivity, Ticketing, Insurance), Transportation (Public, Private), Vehicle, Application, and Region - Global Forecast to 2030" The mobility as a service (MaaS) market is projected to grow at a CAGR of 31.7% from 2020 to 2030, and the market size is expected to grow from USD 6.8