THE AMERICAN AIRLINES’ "MAD DOG" IS BACK 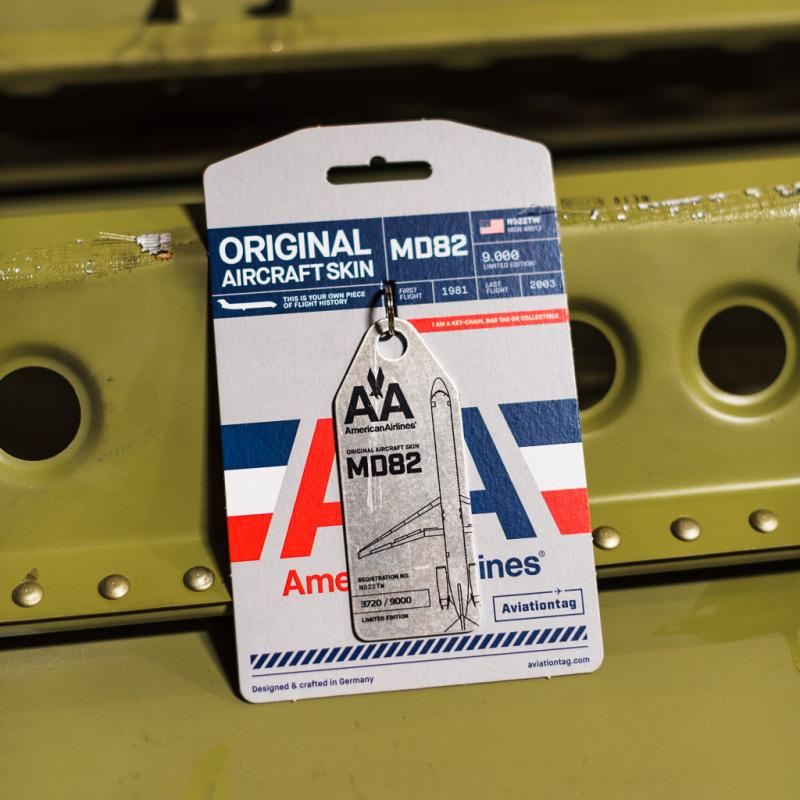 In the eighties and nineties, the MD80 gained cult status at American Airlines. Now bordbar® is delivering 9,000 Aviationtags® officially licensed by the airline crafted from one of the planes. Connoisseurs and fans affectionately dubbed it "Mad Dog". Its other nickname, "Super 80", was even used in adverts: "Have a super day", "The Super 80's are coming!" or "Super 80 for the Eighties" were the slogans the MD80 embarked on its high-flying career to in the eighties. At the height of this career, the twinjet with its distinctive rear engines and gleaming alu-minium finish was the backbone of all American Airlines short and medium-haul flights. Following the success of the test phase, the airline had ordered 260 "Mad Dogs" in the early 1980s. At the turn of the millennium, these were joined by another 103 aircraft from the takeover of Trans World Airlines, and from then on, around a third of all versions of this famous plane ever produced flew for American Airlines. From 2003 onwards, the airline slowly but surely sent the planes into their hard-earned retirement. The unconventional geometry that made the Super 80 so popular had reached new lim-its when it came to efficiency. The last 26 planes were finally taken out of circulation simply be-cause their useful life was at an end. The last passenger flight of an MD80 took to the skies from Dallas/Fort Worth on 4 September 2019 with flight number AA80, flying to Chicago O'Hare. The N922TW - or "N922 Tango Whisky" as aficionados dub it - was completed on 26 July 1981 and first flew for Swissair before being taken over by TWA, where it ultimately became part of the American Airlines fleet. It was an MD82, a further developed version of the MD80. It was slightly heavier and offered a better range of up to 3789 kilometres thanks to its JT8D-217 or 219 engines. In April 2003, "Tango Whisky" landed in Roswell, New Mexico, its final stop. Now its fuse-lage is being given a new purpose: as an Aviationtag® edition limited to 9,000 unique tags. The edi-tion is officially licensed by American Airlines and, thanks to almost 20 years of retirement basking in the desert sun of New Mexico, has a unique retro look. To make the tags, we disassembled and cut parts of the outer skin at our very own manufac-tory in Cologne until they could be punched into the distinct Aviationtag® shape. The final step in this upcycling process was precision printing. Each of the strictly limited-edition Aviationtags® now features the aircraft type, registration number, edition number and size. Each Aviationtag® may vary from other serial numbers in terms of its thickness, colour and haptics and is one of a kind. The data printed on the tags even allows registered users to be identified. This custom Lost & Found Ser-vice provided by Aviationtag® has already made it possible to reunite many a lost Aviationtag® and attached bunch of keys with their owners. The unique pieces are reborn as key and luggage tags - and as collector’s items, because a good share of Aviationtag®’s clientele are true-blue aviation enthusiasts. But actually, almost anyone who loves to travel will succumb to the charm of these small tags. Because Aviationtags® enhance their owners’ everyday lives with an unmistakable feeling: the feeling of taking off into the distance towards new experiences with that tangible extra tailwind behind you. The 9,000 Aviationtags® crafted from the MD80 N922TW are now available at the Aviationtag® shop.Press contact Tobias Richter Vice President Aviationtagpress@aviationtag.com +49 (0) 221 709050-0 Mathias-Brüggen-Strasse 132, 50829 CologneBORDBAR® & AVIATIONTAG®When they founded bordbar design GmbH more than ten years ago, the two friends and passionate aviation geeks Stephan Boltz and Valentin Hartmann fulfilled their dream of turning discarded air-craft trolleys into functional design furniture. Over the years they built up a global network within the aviation industry and their passion for aviation grew unabated. Finally, in 2016 they had the idea of giving decommissioned aircraft a new lease on life as well as aircraft trolleys: Aviationtag was born - a pocket-sized piece of aircraft history. Once the project reached cruising altitude in 2018, it was time to bring Tobias Richter, another experienced airliner, into the company cockpit. He now navigates the Aviationtag division as Vice President. www.aviationtag.com / www.bordbar.de

02-17-2020 | Logistics & Transport
Aviationtag
Aviationtag - THE FIRST AIRBUS A380 EMBARKS ON ITS FINAL JOURNEY
The first ever A380 to enter scheduled service, and also the first ever to be retired, now as a new edition of especially rare Aviationtags. On 25 October 2007, the largest and heaviest airliner that had ever flown on this planet took to the skies: the legendary Airbus A380 with the manufacturer serial number MSN003. It was the first of some 240 A380s now in existence to enter scheduled service
08-28-2019 | Fashion, Lifestyle, Trends
Aviationtag
POCKET-SIZED AVIATION HISTORY
The company bordbar design GmbH takes apart old aircraft and gives their outer skin a new life as key or luggage tags. Aviationtags are strictly limited-edition, sport their own serial number and aircraft information – and are always unique. Every Aviationtag has performed thousands of take-offs and landings as part of an aircraft’s fuse-lage before it adopts its final format and embarks on new journeys as a key or luggage