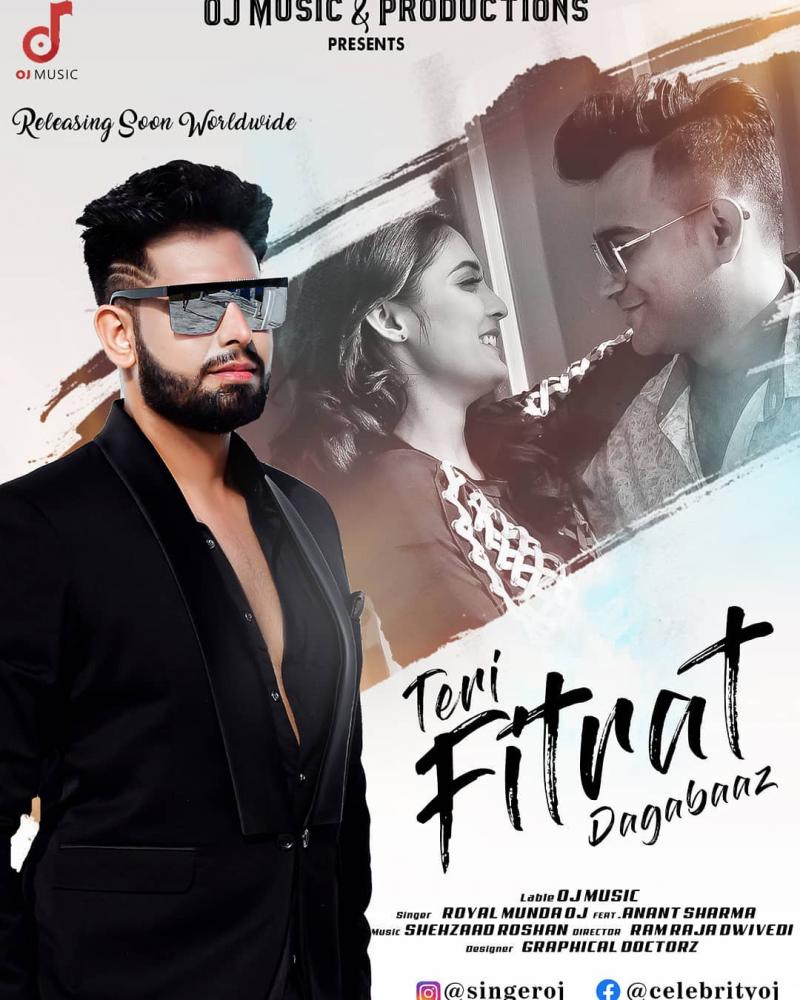 After hooking the fans with his song Munda Royal Hai, singer Royal Munda OJ, is now ready to entertain his fans with his another single. Titled Teri Fitrat Dagabaz, the song has vocals by Royal Munda Oj and features Anant Sharma The poster of the same is out and has been shared by Royal Munda OJ on his social media handle. While sharing it, Royal Munda OJ wrote, By the blessings of Maa Baglamukhi Ji 🙏🏻 OJ Music is going to releasing worldwide the superhit song “TERI FITRAT DAGABAAZ” of 2020 coming soonOJ popular with the name Royal Munda OJ is one of the most promising music composer, rapper and singer in Bollywood. He was born of 21st October 1994 in GTB Nagar, New Delhi in India. 25 year old Indian rapper has striking personality. His 5 feet and 11 inches tall physique and fair complexion has garnered him lot of attention from his female fans. With an MBA degree in his kitty, he is a complete package of great looks, talent and intelligenceOJ was born on 21st October 1994 in GTB Nagar Delhi. His father’s name is OP Jaitly and his mother’s name is Prem Jaitly. He is Hindu by religion. His zodiac sign is Libra and he enjoys singing, dance and travelling. He has completed is MBA from Ivory Carlson University, Minnesota, USA. His height is 5 feet and 11 inches and weighs around 70 kg. Personal Life 25 years old rapper from Delhi is still single. OJ is neither married and nor committed in a relationship. At the moment he chooses to focus on his career and make big in Bollywood. He has no plans for marriage or a committed relationship in near future. Career OJ tasted success with is very first album Munda Royal Hai released by T-series in 2019. This album not only made him over-night sensation but also gave Bollywood one of the most promising music composer, lyricist, rapper and singer. He got famous amongst his fans with the name Royal Munda OJ. In his first album he came up with the concept of bromance with a fresh perspective and a little twist. As destined, this album made him a heart throb amongst both young and old music loversPhenomenal success of his first album made OJ a bankable singer, composer and actor. Many renowned production houses are offering their scripts to the new found talent. Singer, composer and actor OJ is happy that he does not have to do whatever coming his way and has the liberty to choose work. It is a call to everyone in the industry that singer OJ has truly arrived in Bollywood with a swag. OJ was also expected to make a wild card entry in action packed season of Big Boss 13. He was the first choice of the makers mainly because of his huge fan following, popularity and swag. OJ is all set to taste the sweet taste of success even on the international platform. According to sources he is about to collaborate with globally renowned singers and music composers such as Eminem, Cardi B and Drake in an international music project. Though there is no official invitation or announcement for the project, but Indian rappers OJ and Badshah are expected to be the part of upcoming music project. This international music project is intended to address the climatic changes coming across the globe. OJ believes music cannot be confined within the borders and Indian participation will give a fresh perspective to this international music project. OJ has his own production house called OJ music and production registered under WIFA. He believes rap music has lot of potential to be used as a tool I bringing awareness and changes in the society. It can play an instrumental role in bringing a concrete change in the society. His main aim is to focus on writing meaningful content rather than producing vulgar, meaningless musicOJ Music & Productions Outram Lines, Kingsway Camp, GTB Nagar, Delhi-110009Oj Music & Productions is a production house offering all production services. Our aim is to deliver great production value, in a cost effective approach, within a friendly environment

News-ID: 2081467 • Views: 186
Comments about openPR
OpenPR is clearly structured and remains true to its principle of confining itself to the essential parts. OpenPR has proven to be a very good and reliable partner to our media agency: Within the shortest time the releases are online and go down well with the media representatives. The success of OpenPR is reflected in the steadily increasing number of press releases. It is good that OpenPR exists!
Ursula Koslik, Director Marketing & PR, F+W Hamburg