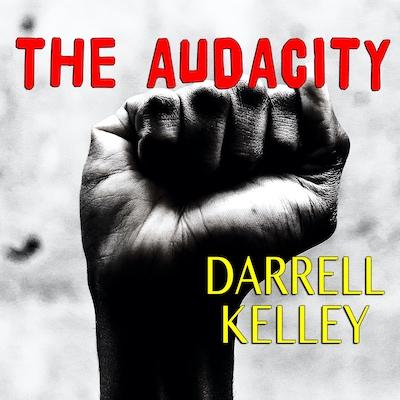 Darrell Kelley's label, Viral Records, announced the release of his latest album, "The Audacity". It is currently being distributed globally by his record company to all major entertainment publications, news platforms, radio stations and digital retailers. As with many of Kelley's prior releases the artist utilizes his music as a contemporary commentary tool to bring attention to the plights and pitfalls that many of the less fortunate within our population sadly face on a regular basis.This socially conscious singer/songwriter chose to produce his latest album the day after hundreds of people came to the Glynn County courthouse demanding accountability for the murder of Ahmaud Arbery, an unarmed 25-year-old African American male fatally shot after being pursued and confronted by two white men in Satilla Shores, Georgia. Charges weren't filed against the local perpetrators until a video leaked to the media sparked national outrage and state officials were forced to step in. Those demanding justice weren't just talking about prison time for Arbery's killers, but changes in a justice system that failed for months to bring the murder suspects to account for any crime. Kelley said, "Ahmaud's murder prompted me to do some research, and I came upon the story of George Meadows, a young black man lynched in Alabama in 1889. It made me wonder if we're still living in those days. Will racism ever end? So I wrote a song about Ahmaud and dedicated it to all the innocents who got killed because of the color of their skin. But before I had even finished recording it I heard the news of the deaths of George Floyd, Breonna Taylor and more and more who died as a result of police brutality. I wrote more songs relating to these events and the idea of putting them together as an album called The Audacity, a titled inspired by a book written by former President Barack Obama called The Audacity of Hope, came to me like a message from God."Viral Records, a small independent label based in the state of Georgia that was founded by Kelley and associates, has promised to use all means available to raise awareness of these travesties with their collective efforts. Their mutual goal is to illuminate the fears, frustrations and often fatal end of the many that society deems as unequal and unworthy of the justice promised to all in the American Constitution. In other words, to have the audacity to take a stand and call out the social crimes being committed in our country and that has sadly become the new norm. News and other updates about this artist may be found at www.darrellkelleyofficial.com. To learn more you may also go to http://www.facebook.com/darrellkelleysmusic. Darrell Kelley's press kit will be provided upon request to any and all members of the media by contacting the representative listed below.Mia Mind Music 6th Street, Suite #2, Hoboken, NJ 07030 Media Contact: Stevie B Phone: 800-843-8575 Email: press@miamindmusic.comWith over 30 years of experience, Mia Mind Music provides music promotion and record label services for both signed and unsigned artists as well as record companies.

09-19-2017 | Arts & Culture
Mia Mind Music
"She" by Charity Ekeke An Indicator 2017 May Be The Next Year of the Woman
The January 2017 Women's March on Washington may have been an early indicator that this year may be a return to 1992's Year of the Woman. Now with the release of Charity Ekeke's album which is titled "She" that early indicator is looking less and less like a slim possibility and more and more like a potential reality. Women have a voice and as Ms. Ekeke embodies and demonstrates on
08-30-2017 | Leisure, Entertainment, Miscel …
Mia Mind Music
Romeo M Comes To America To Release Tracker Love
In search of a larger audience for his music Romeo M, originally from the Democratic Republic of Congo, has arrived in North America to stake his claim and go for that music business gold that so many other artists are striving for. He's a popular performer at festivals throughout South Africa whose style of music has been called Afro-World-Hip-Hop. Romeo M takes the art of keeping your eye on the
08-17-2017 | Leisure, Entertainment, Miscel …
Mia Mind Music
Josey Wellz Releases I Can't Help Myself Album
New York City recording artist Josey Wellz announced the release of his debut record titled "I Can't Help Myself". Six slick songs about love and life that fit snugly into the Top 40 radio category are included in the track list of "I Can't Help Myself" (released on the Josey Wellz Productions label). Josey is a versatile vocalist who is equally comfortable performing club bangers to dance to as he