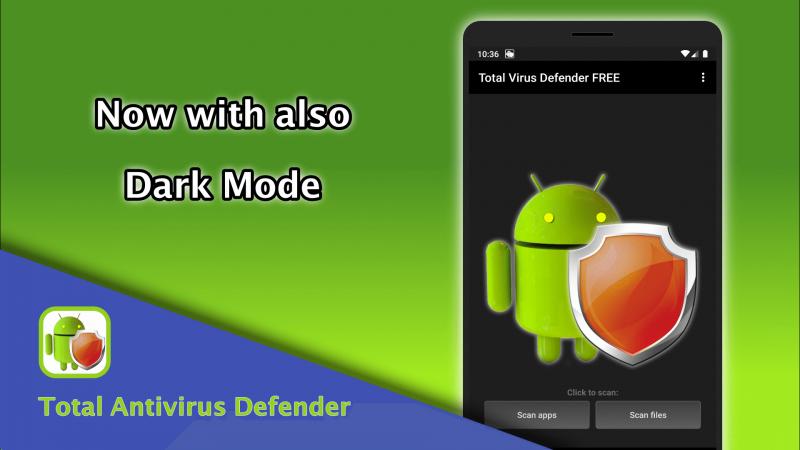 Total Antivirus Defender FREE for Android has been updated to release 2.5.9 and is available for download on Google Play. Some days ago a new version of this antivirus for Android has been released and now it is ready for download on smartphones and tablets with the OS by BigG.It comes with many new features and improvements and allows Android users to detect malware in a simple way (virus, trojan, backdoor). And now, it has also a nice Dark Mode (or theme), for users that love this mode for their apps.Total Antivirus Defender is a very important and useful tool to bring the top protection level on Android devices. It’s both for smartphones and tablets. Unlike other antivirus for Android, this is a simple but effective app. And it's FREE.Over 2,500,000 users have already downloaded Total Antivirus Defender FREE and used this security and antivirus protection for Android with great satisfaction.Total Antivirus Defender is available on Google Play for Android users, but there are also separate versions that the user can download directly from the website of the developer.Now with also the Dark Mode. In this release a new Dark Mode has been introduced. Users can choose between the normal and the dark theme, based on their tastes (both themes are very elegant). The dark theme is commonly considered a good theme to save battery, to relax user’s eyes, and so on… But the dark mode is also a nice mode, a good interface for the user to enjoy with its phone.What about the key features? Total Antivirus Defender will give: 1) a complete security solution for any Android device; 2) an easy to use software to find several kinds of malware (virus, trojan, backdoor, spyware, and other malware); 3) a simple way to obtain security for apps, documents and files.The Real Time scanning: With the Real Time Agent, Total Antivirus Defender FREE protects in real-time the device against dangerous and infected apps and packages (for example during installation), keeping malware far from the user’s smartphone or tablet. Real Time Agent can be enabled or disabled at any time, but it's highly suggested to leave the agent active on the device. In this way, the antivirus can detect all the suspicious activities (as the installation of apps) and help the user to correctly identify viruses and malware.Why a user needs Total Antivirus Defender for Android? Because, when a virus infect a device as smartphone or tablet: 1) it can compromise security of user's data, and privacy; 2) it can waste money, sending SMS from the mobile device (that have their cost); 3) the user's activity can be tracked by malicious attackers; 4) the user's accounts and passwords can be stolen;On Google Play there is also Total Antivirus Defender PRO (Professional version). The user can upgrade to PRO Version and get more features and advanced security options: 1) Advanced scanning 2) Heuristic scanning 3) Rootkit searching 4) No advertise interstitial when starting the app. PRO version is available as in-app purchase or as a separate app on Google Play. Together with the FREE version, also PRO version has been updated to 2.5.9.What’s the impact of the app on the battery life? Total Antivirus Defender will grant security and protection without waste the battery of the device, as other similar apps. Also the real time agent is optimized, and can preserve the battery life.Total Antivirus Defender is definitely the most complete security solution for Android. It is easy to use, fast and light.More languages and localizations Total Antivirus Defender includes also support for several languages, for the best user’s experience. In this release 2.5.9, the developer has improved existing localizations and translations for the several languages of the app, and added the support for more and new languages. At the moment, Total Antivirus Defender supports the following languages, and more are coming soon…: English, Arabic, Bengali, Chinese (Simplified), Chinese (Traditional), Czech, Dutch, French, German, Hebrew, Hindi, Hungarian, Indonesian, Italian, Japanese, Kazakh, Korean, Polish, Portuguese, Punjabi, Romanian, Russian, Spanish, Thai, Turkish, Ukrainian and Vietnamese.What's new in this new version 2.5.9? – The Real Time Agent (real time virus scan) has been improved, for faster and effective scanning; – The Scanning Engine, for both apps and files, has been improved for more effective and efficient scanning; – The Virus Definitions have been updated, based on the new malware vectors and on new threats developed by attacker for Android; – There was a very hard work about the code optimization of the app, now there is a very compact and efficient code, to get a faster app; – Translation and localization: we improved existing localizations and translations for the several languages of the app, and we added the support for more new languages; – Dark Mode: as already written above, we introduced a new Dark mode for the app; – Privacy Policy has been updated, to reflect the current laws and rules; – Minor bugfix: we continuously work hard to solve bugs of the app, problems with the several versions of Android, the several models of devices, and so on.For further information, there is a website for the app (See link below).Total Antivirus Defender FREE is available for download on Google Play. After download, it will protect any Android device against viruses, keeping it safe.Available for download on Google Play: https://play.google.com/store/apps/details?id=com.securitydefend.totalvirusdefender Short link (Google Play): https://tinyurl.com/ybnro97r Website: https://www.totalantivirusdefender.com Promo video (Youtube): https://youtu.be/f5mRlk0T1FY Press material: https://www.totalantivirusdefender.com/press_release/Press_material_for_Total_Antivirus_Defender.zip13633 W Gable Hill Dr Sun City West, AZ 85375 United StatesSecurity Defend is specialized in development of security software solutions for many years. Recently, it moved its interest in development of apps for mobile devices (smartphones and tablets, expecially for Android platform) and security consulting. Many users (over 2,500,000) have already used app Total Antivirus Defender FREE for Android with great satisfaction. For further information about Android solutions for security, please visit website https://www.totalantivirusdefender.com

You can edit or delete your press release Total Antivirus Defender FREE for Android: a new release 2.5.9 is online. Now with Dark Mode. here

04-22-2019 | Health & Medicine
Market Density
Global Total Knee Arthroplasty Market Research Report
This report studies the global Total Knee Arthroplasty market status and forecast, categorizes the global Total Knee Arthroplasty market size (value & volume) by manufacturers, type, application, and region. This report focuses on the top manufacturers in North America, Europe, Japan, China, and other regions (India, Southeast Asia). The major manufacturers covered in this report Zimmer Biomet Stryker DePuy Synthes Smith and Nephew Aesculap Implants Systems Exactech Medacta MicroPort Scientific
04-04-2017 | Business, Economy, Finances, B …
Workplatform Ltd
More Access for Total Hire, Derby
UK based rental company Total Hire has purchased a number of Genie scissor and booms lifts, including 19ft, 26ft and 32ft slab electric scissors and 45ft diesel and bi-energy Z45/25 articulated boom lifts from UK Genie dealer, Workplatform. The company was established in 1999 and now offers a wide range of equipment from seven locations, four in the Derby area and the others in nearby Huthwaite, Ripley and Somercotes. Its product
03-02-2017 | Advertising, Media Consulting, …
GlobeMetrix
Global Naphtha Market 2017 - Vitol, Total, Sinopec
The report entitled Global Naphtha Market 2017 presents key insights into the global Naphtha market along with the latest up-to-date industry details and forthcoming Naphtha industry trends, which will assist the readers to focus on product specification and end users driving the overall market revenue and profitability. Report Keynotes The main motive of the report on "Global Naphtha Market 2017" is to study comprehensive details of the market investors, key industry players
09-22-2011 | Logistics & Transport
Total Quality Logistics
Total Quality Logistics Brings Jobs To Dayton
Dayton, Ohio--Total Quality Logistics (TQL), the largest privately-held firm of its kind, announces the opening of its newest satellite office in Dayton, Ohio. TQL is a freight brokerage firm that arranges the shipping of products for thousands of customers throughout North America utilizing leading technologies, committed professionals and a network of more than 58,000 carriers. The company is proud to make Dayton the home of its tenth satellite office. "This new team
04-06-2011 | Logistics & Transport
Total Quality Logistics
Total Quality Logistics Opens Indianapolis Office
Indianapolis, IN—Total Quality Logistics (TQL) Indianapolis is officially open for business. The newest TQL satellite office opened April 4, 2011, in the Keystone area of Indianapolis at 9000 Keystone Crossing, Suite 440. This is the seventh TQL satellite office to open in the last two years, and the third so far in 2011. TQL’s goal is to expand its national footprint in cities across the U.S. by bringing together experienced TQL
09-24-2010 | Science & Education
Total Education Solutions
Total Education Solutions Relocates Michigan Office
Troy, MI, September 20, 2010—Total Education Solutions (TES), a leading provider of special education services, recently announced the relocation of its Michigan office. The move signals the expansion of the company’s clinical program and demonstrates its commitment to the region as well as its desire to further boost its presence throughout the state. When TES’ Michigan office opened in 2002, its primary focus was school-based services. Over the years,
Comments about openPR
Your portal is fast, simple, and easy to use. Others may have more functions but they also demand more editing time, you have to preformat the text in order to achieve a good result etc. I think openPR is really fantastic!
Andreas Knepper, wallmedien AG