A Love Letter to America


Press release from: Never Give Up YOur Dream 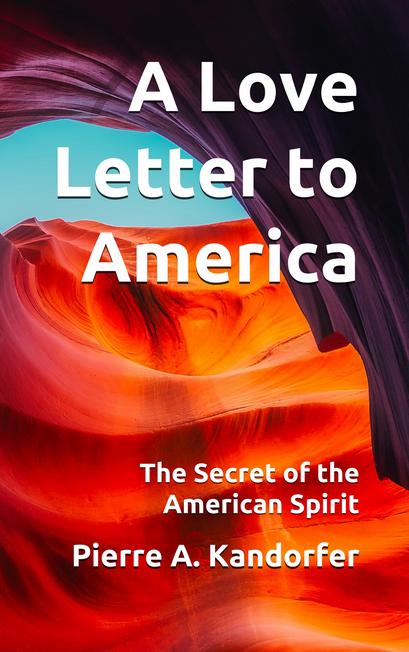 California City, CA. The latest book by Pierre A. Kandorfer reveals an open secret of our life. The secret of the American spirit. It is titled “A Love Letter to America” and is written by somebody who loved the American Dream when he was still in a High School in Europe decades ago.In my vision of the American Dream, America is the only place where a poor, helpless “nobody” had a chance to live a decent life or even to become a millionaire. America appeared to us Europeans as the only society where anybody could generate his own fortune following the American spirit, this is with hard work, proper self-discipline, and limitless determination. Only in America, we were told as kids, such things are possible, and we believed that deeply. At the end of WW2, we did not have to look far-away for the proof. At that time, everything good came from America. The US rescued us from Hitler’s tyranny, fed us, helped us politically and economically to survive the terrible aftereffects of the war. What has been totally forgotten, America also gave the war-ravaged European countries, especially Germany, the vision and practical help to establish their own democratic political systems. At that time, the US Constitution was considered the ideal form of people-oriented government form. I still remember the enthusiasm of my High School teacher praising everything American.Pierre Kandorfer is a veteran journalist with thirty-five years of media background. He wrote thousands of articles, hundreds of TV programs, and a dozen books such as “You Don’t Know Who You Really Are,” “No More Doubt – Science Confirms the Bible,” “Whom Can We Still Trust,” “Fight Back Manual,” “Find Peace of Mind or Lose Your Mind,” in addition to some media textbooks. Pierre’s books are available at NeverGiveUpYourDream.US, Amazon, and other booksellers.Pierre taught media communications, acted as Dir. of Programming of a nationwide TV broadcasting, worked as TV host and producer of a movie series and hundreds of TV shows. He also is a commercial pilot, speaks several languages, and is a proud Christian and passionate Constitutionalist.20856 Village Parkway California City, CA 93505Books and media communications

More Releases from Never Give Up YOur Dream

01-28-2019 | Media & Telecommunications
Never Give Up YOur Dream
New book shows how to deal with stupid, hostile and annoying people among us
The latest book by Pierre A. Kandorfer displays one of the most pressing problems in our society: How can we get along with increasingly hostile, unreasonable, and mean people everywhere? Throughout the history of human civilization, there were always many stupid, unreasonable, mean, violent, annoying, and deeply egotistical people around. They always were a minority and did not bother the rest of humanity much at all. Nowadays, however, our “modern lifestyle” with