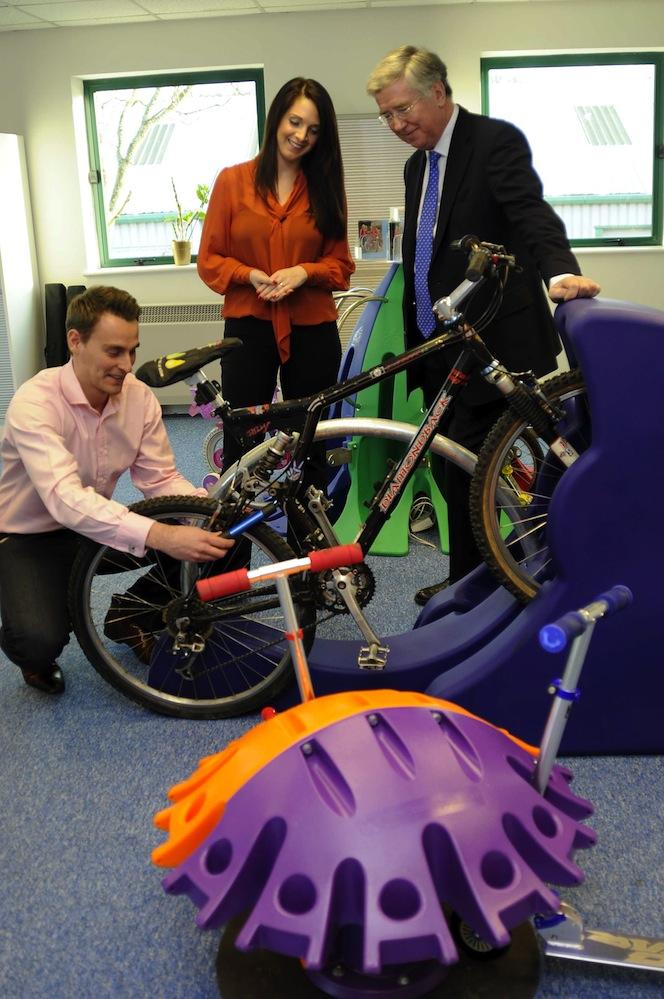 Fallon, who is Conservative MP for Sevenoaks, visited Cyclepods on Friday 13th January 2012 and was impressed by the award-winning bicycle storage manufacturer.

“Cyclepods is a good example of a successful local business, showing how British design and manufacturing can take on the world. The firm has found a niche in the market and is producing high-quality, innovative goods. Cyclepods has a full order book, with clients ranging from local schools and railway stations to large international firms like KPMG, and is winning orders overseas,” he said after the visit.

Cyclepods produces bicycle storage products, which use 50 per cent less space than conventional cycle stands and cycle racks. It is also a carbon-neutral company and all its products are manufactured from recycled or recyclable materials. The firm has a turnover of over £1 million and employs 12 people.

Fallon arranged his visit to Cyclepods after his secretary met the local company at an ATOC (Association of Train Operating Companies) event. Sevenoaks station has been named the official station for the Paralympic cycling event at Brands Hatch in August.

“We want to produce attractive bicycle storage, which prevents overcrowding and damage to the bikes, and encourages cycling and a healthier way of life,” said Cyclepods co-founder James Stewart.

Cyclepods has won a number of accolades for its products, including Bromley Business Environment Award 2007, ACT Travelwise’s Innovation of the Year 2011 and the Shell Live Wire Young Entrepreneur of the Year.

“Over the coming year, I will be doing all I can to support businesses like Cyclepods. With the right support, British manufacturers can flourish and compete with firms across the world. New small businesses are the key to the jobs of the future”, Fallon concludes.

Cyclepods produces a number of bicycle storage solutions, including the Cyclepod, Streetpod, Minipod, Scooterpod and Spacepod. Available in a wide range of colours and finishes, they are designed to save space, look attractive and provide a secure location to store bicycles. Cyclepods also provides advertising and branding opportunities on its products.

Based in Westerham, Kent, Cyclepods Ltd was launched in 2005 by co-founders James Steward and Natalie Connell. It now has a number of notable clients, including Network Rail, East Midlands Trains, BBC, IKEA, Sainsburys, KPMG, M&S, Ford and Canary Wharf. They also provide bicycle storage to a number of schools and councils across the UK, including the London Borough of Bromley.

Cyclepods is the only Carbon Neutral cycle storage company, and all of its products are manufactured in the UK from either 100% recycled or recyclable material.

News-ID: 207734 • Views: 1635
Comments about openPR
I can't but agree to the positive statements about your portal: easy to use, clear layout, very good search function, and quick editing!
Jens O'Brien, Borgmeier Media Communication