THE WORLD'S MOST CONTROVERSIAL ACTION FIGURE...EVER! 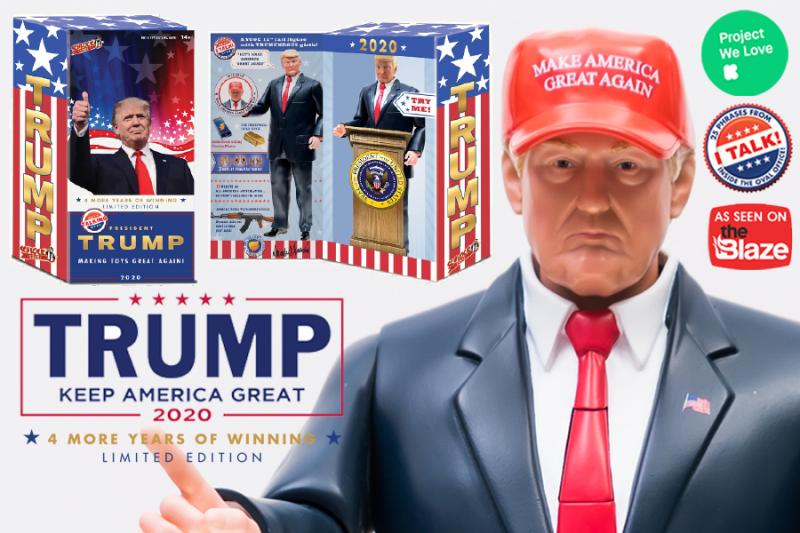 FOR IMMEDIATE RELEASETHE WORLD'S MOST CONTROVERSIAL ACTION FIGURE...EVER!Contact: William Hirsch - Schlock Toys @ +1-949-677-9353 or DocSchlock@SchlockToys.comFeatured on Tomi with Fox News host Tomi Lahren! SCHLOCK TOYS join forces with Kickstarter to Make Toys Great Again!The Kickstarter campaign page can be found HERE: https://www.kickstarter.com/projects/schlocktoys/collectors-edition-talking-trump-2020-man-of-action-figure/description“What a great message to be sent, and I think Trump himself would love this and that he’d be excited about it!” - Tomi Lahren, Fox News“You are really Making Toys Great Again with your Trump!” - Kanye West“I’ve gotta have your Trump for one of my videos! - Nick Egan, Music Video Director for Bob Dylan, Oasis, INXS, Alanis Morissette & Duran DuranJune 18, 2020 - Irvine, CA - Even with so much HATE, the world just can’t get enough of President, Donald J. TRUMP! To fulfill the insatiable need for fans (and haters!) to get their hands on The Donald, toy industry guru, William “Doc Schlock” Hirsch, is releasing a collector’s quality, fully articulated, 12” tall, talking TRUMP "Man of Action" figure, featuring 25 of his most memorable quotes from the oval office spoken in TRUMP’s actual voice!Doc Schlock, Founder of Schlock Toys, announced his company’s launch of a Kickstarter campaign on June 12th, to put this perfect likeness of President TRUMP into production.“We have created the ultimate collectible Talking TRUMP Man of Action figure!, But OMG, all the HATE it has attracted! I’m getting death threats DAILY.” says “the Doc”, a creative powerhouse and accomplished toy industry executive who has led global design teams at such industry giants as Mattel and Hasbro, and who has developed scores of licensed merchandise for leading entertainment giants such as Disney/Pixar, Lucasfilm, 20th Century Fox, Nickelodeon, and Warner Brothers.“Schlock Toys is poised and ready to go straight into production of the ONLY Talking TRUMP Presidential Action Figure available right NOW, if someone doesn’t put a bullet in my head first.” added The Doc. “The production run will be extremely limited to enhance the value of this action figure and cement its collectible status.”For a donation of only $40, you can reserve your fully articulated, hand-painted talking action figure. The Kickstarter campaign’s goal is to raise $150,000 by July 12th. Once fully funded, a limited amount of 45 "Early Bird” donators can expect to receive their action figures by Christmas 2020!There are various tiers of donation, one for practically anyone’s budget, starting at as little as $1. The higher tiers also features some exclusive Schlock Toys swag to keep things Schlocky!How to Grab This Story:1) The first fully-functioning prototype of the action figure and its creator, William “Doc Schlock” Hirsch, are available for in-studio demonstrations starting June 10th, 2020. Schlock Toys is based in Irvine, Orange County in Southern California.2) The Kickstarter campaign page can be found here: https://www.kickstarter.com/projects/schlocktoys/collectors-edition-talking-trump-2020-man-of-action-figure/description3) For interviews or high-resolution images of the action figure, contact Schlock Toys at +1 (949) 677-9353 or DocSchlock@SchlockToys.com4) Connect with Schlock Toys on Social Media: • FaceBook • Instagram • Twitter • YouTube • LinkedIn • www.schlocktoys.comSchlock Toys LLC 1 League #61321 Irvine, CA 92602Who Are We? Schlock Toys is a lethal combination of seasoned toy design, development, technology, supply chain, packaging and marketing experts who, combined, have well over a century of experience at some of the largest toy companies on the planet.We eat, sleep, and breathe toys 24/7, and we know what you want (yes, we can read your minds!) plus, we know how to get our awesome goods in your hands!Doc Schlock's lifelong dream has been to create a toy company that does things the right way: with vision, passion, talent and FUN! Our ultimate goal: to bring you the winningest toys ever!Since we are the "World's First Kosher Toy Company", we have to answer to an even higher authority.Our Mission: To make the most entertaining, innovative, and thought-provoking toys in the world. At Schlock Toys, we're working tirelessly to create the future of toys for kids of all ages.Our future vision: To create the first fully American toy company with all operations on US soil employing thousands of Americans! Your support is greatly appreciated!

You can edit or delete your press release THE WORLD'S MOST CONTROVERSIAL ACTION FIGURE...EVER! here