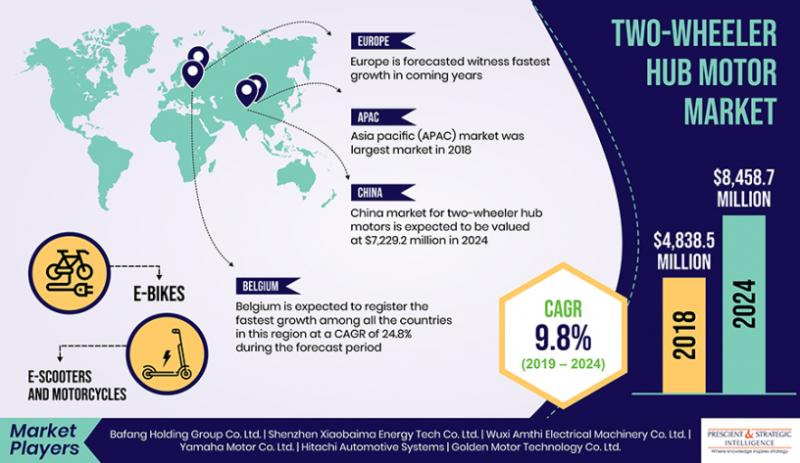 In 2018, the global two-wheeler hub motor market was valued at $4,838.5 million, and it is expected to reach $8,458.7 million by 2024, witnessing a CAGR of 9.8% during 2019–2024. In terms of end use, the demand for the product was the higher in 2018 among OEMs.However, the faster growth in the two-wheeler hub motor market is expected to be witnessed by the aftermarket category. The rising adoption of electric two-wheelers would propel the demand for their components. The lesser lifespan of hub motors compared to that of electric two-wheelers would lead to a greater demand for them in the aftermarket, in the forecast period.Request to Get the Sample Report@ https://www.psmarketresearch.com/market-analysis/two-wheeler-hub-motor-market/report-sampleGrowing Demand for High-Powered Motors is a Major Trend in the MarketThe growing demand for high-powered motors is a key trend being observed in the two-wheeler hub motor market. Major manufacturers, such as Zero Motorcycles Inc., BMW AG, and Vectrix, are offering electric motorcycles with a motor power more than 30 kW and have announced their plans of launching models of even higher motor power. For instance, in November 2018, Savic Motorcycles, Australia’s first electric motorcycle company, announced that a new electric model, Cafe Racer, with 60 kW motor power, will be launched by 2020. Besides, many OEMs of conventional gasoline-based motorcycles have announced their plans of introducing high-powered electric models in the near future. Thus, the increasing demand for higher-powered motors is one of the major trends being observed in the market.Explore Full Report Description At@ https://www.psmarketresearch.com/market-analysis/two-wheeler-hub-motor-marketThe usage of hub motors by OEMs has been higher in the two-wheeler hub motor market. The increasing adoption of electric two-wheelers, especially in public sharing services, has surged the demand for them as well as their components, including hub motors.Geographical Analysis of Two-Wheeler Hub Motor MarketThe APAC region alone held over 95.0% volume share in the two-wheeler hub motor market in 2018. The dominance of the APAC region is mainly attributed to the massive demand for electric two-wheelers in China. Moreover, the Chinese government is actively making efforts to reduce vehicular pollution by implementing restrictions on gasoline-driven vehicles, which majorly contributes to the rapid adoption of electric alternatives. Additionally, Chinese consumers have been receiving cash incentives in the form of subsidies, which is further encouraging them to shift to these vehicles.Apart from the APAC region, the North American and European regions show promising growth prospects for the two-wheeler hub motor market. The introduction of stringent government norms as well as high environmental concerns have the potential to spur the market growth in these regions.Make Enquiry BEfore Buying the Report@ https://www.psmarketresearch.com/send-enquiry?enquiry-url=two-wheeler-hub-motor-marketCompetitive Landscape of Two-Wheeler Hub Motor MarketThe global two-wheeler hub motor market is highly fragmented in nature. The top five players in the market together accounted for less than 40.0% of the market revenue in 2018. Yadea Technology Group Co. Ltd. was the market leader, followed by Robert Bosch GmbH, Ananda Drive Techniques Co. Ltd., Jiangsu Xinri E-Vehicle Co. Ltd., and Zhejiang Luyuan Electric Vehicle Co. Ltd.Contact: P&S Intelligence International: +1-347-960-6455 Email: enquiry@psmarketresearch.com Web: https://www.psmarketresearch.com Blog: http://psintelligence.blogspot.com/About P&S Intelligence P&S Intelligence is a provider of market research and consulting services catering to the market information needs of burgeoning industries across the world. Providing the plinth of market intelligence, P&S as an enterprising research and consulting company, believes in providing thorough landscape analyses on the ever-changing market scenario, to empower companies to make informed decisions and base their business strategies with astuteness.

11-29-2021 | Business, Economy, Finances, B …
P&S Intelligence
Adhesive Tapes Market Emerging Trend, Advancement, Growth and Business Opportuni …
The expansion of the automotive industry is driving the demand for adhesive tapes across the world. This is because tapes having adhesive characteristics are extensively used in the automotive industry, primarily in the form of protection tapes and double-sided tapes. Moreover, automobile manufacturers are increasingly preferring to use automotive tapes having adhesive properties over the conventionally used mechanical fasteners in order to reduce the weight of the automobiles. As mechanical
11-29-2021 | Advertising, Media Consulting, …
P&S Intelligence
MRI Systems Market to Witness Robust Growth in Coming Years
The World Population Ageing 2020 report forecasts that the global population of people aged 65 years and above will reach around 1.5 billion by 2050. The mounting aging population is generating a high requirement for MRI systems due to the rising incidence of chronic diseases within this age pool. Since geriatric care is intricate, healthcare units are rapidly deploying magnetic resonance imaging (MRI) systems to offer quick diagnosis and better
11-29-2021 | Advertising, Media Consulting, …
P&S Intelligence
What Are Key Trends in Computed Tomography Market?
The rising prevalence of chronic diseases and continuous developments in technology will be responsible for the significant growth in the computed tomography (CT) market in the years to come. A CT scanner fires conventional X-ray beams into the patient’s body from different angles and then uses a computer to present a cross-sectional view of the interior anatomy, by combining all the images. Today, CT is being widely used for seeing
11-29-2021 | Advertising, Media Consulting, …
P&S Intelligence
Why Is Portable Ultrasound Device Adoption Rising around the World?
Each year, cancer kills 9.6 million people, while heart diseases (CVDs) kill 17.9 million people, says the World Health Organization (WHO). These massive mortality rates and incidence of chronic diseases are leading to more hospitalizations each year, which is giving a strong push to the global healthcare industry. New medical facilities are being constructed, while the existing ones are being advanced and expanded. Now, one of the most essential steps

02-04-2019 | Tourism, Cars, Traffic
The Insight Partners
Passenger Vehicle Market Outlook to 2025 - Top Leading Players Toyota Motor, Vol …
Worldwide Passenger Vehicle Market Analysis to 2025 is a specialized and in-depth study of the Passenger Vehicle Industry with a focus on the global market trend. The report aims to provide an overview of global Passenger Vehicle Market with detailed market segmentation by product/application and geography. The global Passenger Vehicle Market is expected to witness high growth during the forecast period. The report provides key statistics on the Market status
09-28-2018 | Associations & Organizations
The Insight Partners
Sports Utility Vehicle Market to 2025 – Suzuki Motor, PSA Group, FCA Group, Ho …
Sports utility Vehicles Market are the vehicles which appear as a station wagon designed for the off roads travelling which not only used for commercial purpose but for family purpose also providing high functionality with comfort and luxury and above built with enormous space too. One of the major driver for the growth of Sports Utility Vehicles market is the continual improvement in styling, comfort, outer body and systems in
09-12-2018 | Business, Economy, Finances, B …
Coherent Market Insights
Axial Piston Motor Market
Download PDF Brochure @ https://www.coherentmarketinsights.com/insight/request-pdf/2100 An axial piston motor is a positive displacement motor that has a number of pistons in a circular array within a cylinder block. Axial piston motor works with a bent axis design or swash plate principle and is available in both variable and fixed displacement designs. The constant displacement type works as a hydraulic motor and the variable displacement type works as a hydraulic pump. Growing the
03-21-2018 | Tourism, Cars, Traffic
QYresearchreports
Global Luxury Van Market: Honda Motor, Hyundai Motor, Toyota Motor, Ford Motor, …
Qyresearchreports include new market research report Global Luxury Van Market Professional Survey Report 2018 to its huge collection of research reports. This report studies Luxury Van in Global market, especially in North America, China, Europe, Southeast Asia, Japan and India, with production, revenue, consumption, import and export in these regions, from 2013 to 2018, and forecast to 2025. This report focuses on top manufacturers in global market, with production, price, revenue and
01-25-2018 | Energy & Environment
GD Rectifiers
Enerdoor's Motor Protection Range
Enerdoor has developed a Motor Protection Series to protect motors from harmful overvoltage and dV/dt spikes generated on the output. This is particular useful for applications with variable frequency drives and servo-motors. This series includes common mode and differential mode inductances, sine wave filters and snubbers designed to work with various frequency switches, output frequencies and applications. The sin wave filter series reduces the pulse wave modulation (PWM) effect, converts the PWM
05-03-2017 | Business, Economy, Finances, B …
business news
Automobile Market 2017 - Daimler, BMW Group, Honda Motor, Ford Motor, Nissan Mot …
Apex Research, recently published a detailed market research study focused on the "Automobile Market" across the global, regional and country level. The report provides 360° analysis of "Automobile Market" from view of manufacturers, regions, product types and end industries. The research report analyses and provides the historical data along with current performance of the global Automobile industry, and estimates the future trend of Automobile market on the basis of
Comments about openPR
Your portal is fast, simple, and easy to use. Others may have more functions but they also demand more editing time, you have to preformat the text in order to achieve a good result etc. I think openPR is really fantastic!
Andreas Knepper, wallmedien AG