Beloved Comrades: A Novel in Stories - A Story Of Drama, Community, Friendship, And Love


Press release from: US Book Views 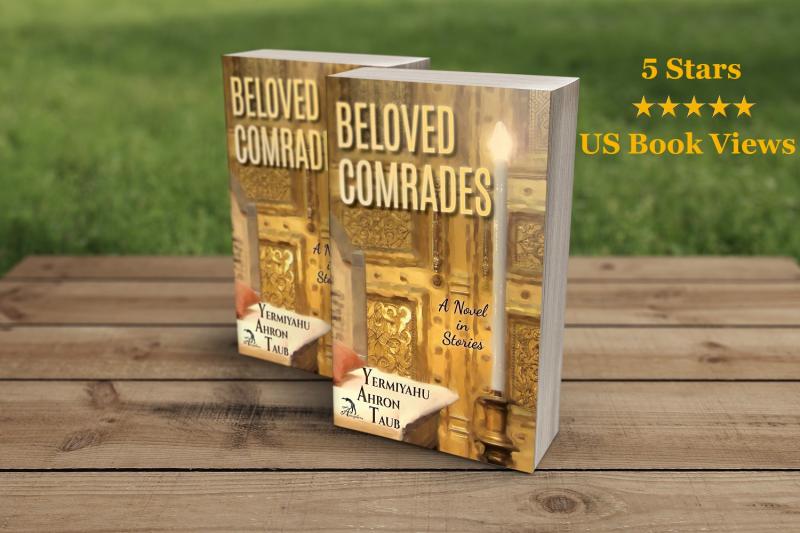 Beloved Comrades: A Novel in Stories

Beloved Comrades: A Novel in Stories - A Story Of Drama, Community, Friendship, And LoveAuthor Yermiyahu Ahron Taub is pleased to announce that his book, Beloved Comrades: a Novel in Stories received a 5 star review from USBookViews.com."A story of drama, community, friendship, and love that shows how even the smallest event can send ripples throughout lives and lifetimes" - 5 Stars USBookViews.comThrough multiple perspectives across multiple generations, Beloved Comrades by Yermiyahu Ahron Taub tells the compelling collective tale of the community tied together by the Congregation Haverim Ahuvim. Although a novel in stories, Beloved Comrades reads as a coherent whole, smoothly transitioning from one story to the next so that only the changes in perspectives and setting indicate the change. Taub takes readers into the present and past lives of a diverse cast of well-developed characters, from the founding congregants to their children's teachers to the former owner of the mansion. He gives them glimpses into the shared childhood of Arnold and his former best friend/fellow founding congregant, Eli, as long-held tensions bubble to the surface; explores the beautiful marriage of Arnold and Myrna; dives into the psyche of Agnes Smith and her focus on her student and Eli's daughter, Mindl; records the downfall of the last of the Van Nuys family; and more. In looking at these different characters' lives, Taub takes the reader on an emotional journey that is both heart-warming and heart-wrenching. Whether it is the tender love and understanding between Arnold and Myrna, the frustrating mutual jealousy and lost friendship between Arnold and Eli, or Agnes's guilt and sadness over her niece's death, emotions run high for both the characters and the reader. However, Taub manages to pull these emotions and the emotional engagement off with simple, subdued writing that is quick and easy to read despite the book being 284 pages long. It does take a few pages--almost twenty--for these emotions to really start seeping through this writing. Once they do, though, the book picks up and becomes a very enjoyable read.More satisfying than the emotional journey, though, is the fact that this novel conveys themes that apply both to the community it depicts and to anyone who chooses to read it. This book focuses on a couple specific groups of people that are woefully underrepresented, Jewish Americans and Jewish immigrants, which is a refreshing change of pace given the steady supply of fiction about Christian communities available. Naturally, some of the themes, such as immigration, apply to this demographic in particular. However, the majority that the novel portrays--love, friendship, community, faith, sexuality, social justice--are universal, something that all readers can connect to. This fact reminds the reader that no matter our religion, our nationality, our background, we are all still human.Beloved Comrades is a beautifully written work about the long-lasting effects of the most minor events in our lives. Taub perfectly highlights moments from his characters' private and social lives, revealing through the contrast discrepancies not only among the congregants but between their public and private personas. Gentile readers might struggle with the Hebrew and Yiddish terms but, fortunately, a handy list of terms and their definitions has been provided at the end of the book, along with a cast of characters and their relationship to the others provided at the beginning. The book might be about the Jewish experience, but its appeal speaks to the universal human experience. http://usbookviews.com/5-stars-beloved-comrades-a-novel-in-stories/Beloved Comrades: a Novel in Stories By Yermiyahu Ahron Taub Publisher: Anaphora Literary Press Release Date: May 19, 2020 ISBN: 978-1681145235 (pb) ISBN: 978-1681145242 (hc) ISBN: 978-1681145259 (ebook) Pages: 284 Genre: Fiction, Multi-cultural fiction, Jewish StoriesAbout the Author Yermiyahu Ahron Taub (www.yataub.net) is the author of the short story collection, Prodigal Children in the House of G-d (2018), winner of two CIPA EVVY Merit Awards (LGBTQ Fiction and Religious/Spiritual Fiction) and named a finalist for a Foreword INDIES Award in the Religious (Adult Fiction) category. He is also the author of six books of poetry, including A Mouse Among Tottering Skyscrapers: Selected Yiddish Poems (2017). Preparing to Dance: New Yiddish Songs, a CD of nine of his Yiddish poems set to music by was released in 2014. Taub was honored by the Museum of Jewish Heritage as one of New York's best emerging Jewish artists and has been nominated four times for a Pushcart Prize. With co-translator Ellen Cassedy, he is the recipient of the 2012 Yiddish Book Center Translation Prize and the 2014-2017 Modern Language Association's Fenia and Yaakov Leviant Memorial Prize in Yiddish Studies for Oedipus in Brooklyn and Other Stories by Blume Lempel (2016). His short stories have appeared in numerous publications, including Hamilton Stone Review, Jewrotica, Junto Magazine, Oyster River Pages, Marathon Literary Review, Second Hand Stories Podcast, and Verdad Magazine. Website: https://yataubdotnet.wordpress.com/ Facebook: https://www.facebook.com/profile.php?id=100005912715637US Book Views Chattanooga, TN http://usbookviews.com/5-stars-beloved-comrades-a-novel-in-stories/US Book Views is a small company that helps indie authors, small publishers, and hybrid authors get much needed book reviews and exposure for their books.

You can edit or delete your press release Beloved Comrades: A Novel in Stories - A Story Of Drama, Community, Friendship, And Love here

10-23-2018 | Health & Medicine
Poonyah
Caring for your beloved elderly family members from miles away is now possible w …
Recently, India has seen a palpable shift towards the concept of nuclear families. As most people from the present generation live far away from their parents and lead a busy lifestyle, they are often riddled with constant concern about their parent’s health issues and loneliness along with the guilt of not being able to take care of them. Poonyah, a London-based technology-enabled home care firm, has come up with a
08-24-2017 | Health & Medicine
Saucon Valley Manor
Hire the best assisted living facility for your beloved elders!
United States 24-08-2017. Saucon Valley Manor is the leading community provides best standard of assisted living in Easton. It is providing professional and specialized assisted living services to elder citizens. These services are completely suitable to various needs of elders and adults with disability. If your elders are at the point when they are just unable to balance their life then hiring well-designed assisted living services can be good decision.
11-20-2011 | Tourism, Cars, Traffic
Newlink Communications
THE BELOVED HOTEL PLAYA MUJERES: THE NEWEST VENTURE FROM EXCELLENCE GROUP
Cancun, Mexico November 18th, 2011. - Excellence Group Luxury Hotels & Resorts, the hotel chain known worldwide for managing 5-star resorts in the Caribbean, announces the renewal of its portfolio with the creation of the Beloved Hotels brand; a new concept that combines luxury and comfort with the convenience of the 'boutique style' all-inclusive, in the perfect family-friendly setting poised for pleasure and relaxation. Excellence has selected one of its most
10-17-2011 | Sports
Tallgrass Creek
Overland Park, KS, Retirees at Tallgrass Creek to ‘Punt, Pass and Kick’ Thei …
WHAT: A Friday, October 21, Pep Rally, Tailgate Party and ‘Punt, Pass and Kick’ Contest by the nearly 300 residents of Tallgrass Creek retirement community in Overland Park, Kansas. Residents will throw footballs for distance, kick an onside kick and dance in the end zone. They will do this to celebrate their collective health and fitness and to cheer their beloved Kansas City Chiefs, Kansas University and Kansas State football teams
08-23-2011 | IT, New Media & Software
3M Interactive Solutions Division (MISD)
Upgrade and Protect Beloved Tablet PCs with Premium Protection Films from 3M
Give tablets lifetime screen protection and benefit from privacy on-the-go Bracknell, UK, 22 August 2011 – 3M, the diversified technology company, is now shipping its range of protection films optimised for tablet PCs and the Apple iPhone range. Users no longer need to tolerate annoying scuffs or bubbling and peeling issues associated with traditional mobile device protection films. The range from 3M’s Mobile Interactive Solutions Division (MISD) consists of two product
08-01-2011 | Business, Economy, Finances, B …
auntjemimapancakesyrup.com
Aunt Jemima Pancake Syrup Website Launch
MONTREAL, QC — Since 1966, Aunt Jemima pancake syrup has been a staple of kitchen tables across America. Now a new website, auntjemimapancakesyrup.com aims to celebrate this quintessentially Southern brand and all that it has contributed to popular culture. With the launch of the website, information about all things Aunt Jemima will be available in one place for syrup aficionados and pop culture and history buffs alike, and select products,
Comments about openPR
OpenPR is clearly structured and remains true to its principle of confining itself to the essential parts. OpenPR has proven to be a very good and reliable partner to our media agency: Within the shortest time the releases are online and go down well with the media representatives. The success of OpenPR is reflected in the steadily increasing number of press releases. It is good that OpenPR exists!
Ursula Koslik, Director Marketing & PR, F+W Hamburg