Dark Money and The High Price Tag of Elections 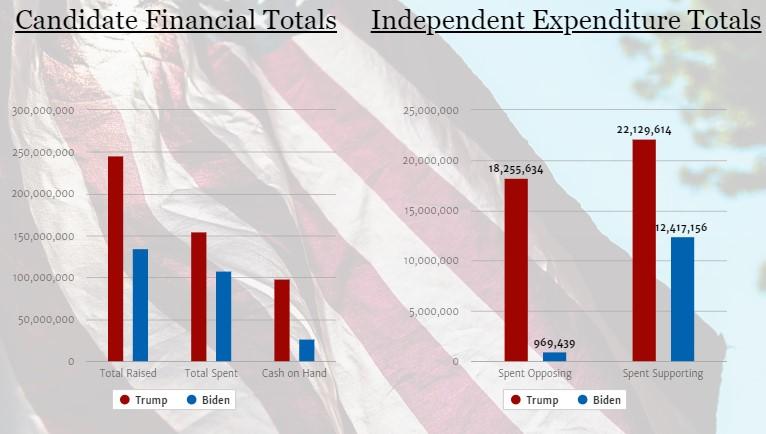 Small children are often asked, "What would you like to be when you grow up?" Common answers include a doctor, a policeman, a fireman, a veterinarian, or even president. Although it may seem that an individual just needs a platform, a voice, and the support to be elected for a political office, it actually requires a great deal of money. The money required to run for office continues to increase. Over the last ten years, there has been a 155% rise in the cost of running for Congress. There has been a 69% rise in the cost of running for president. What is this money used for and where does it come from?Where Does the Money Go?The biggest use of campaign funds is for getting the candidate's message to the people. This involves advertising, media, and communications.Additionally, the candidate usually hires a staff to manage and plan their campaign. The size of their staff impacts the amount spent in a particular area. Finally, the candidate also needs to travel and interact with voters on the road. This can be a significant expense and varies based on chosen modes of transportation and other travel expenses. Main Sources of Campaign Funds The Federal Election Commission is responsible for overseeing the finances that are raised for elections and is charged with making this information available to voters. This agency was developed in 1975 and its purpose is to support transparency and administer and enforce campaign finance law.1. Individual Contributions Individuals consistently contribute to candidates, either intentionally or unintentionally. Some of the money that supports elections comes through taxes. Taxes help support conventions and also run the polls. Individuals have the option to contribute to the election fund when they complete their tax return form. Individuals may intentionally choose to donate to the campaign of their favorite candidate with small or large contributions. They may do this because they believe in the candidate or they are hoping that the candidate will return a favor to them or support their cause at some point in the future.2. PACs PACs stands for Political Action Committees. They were developed in 1944 and their main purpose is to support the election of a particular candidate. There are many types of PACs and they are all under the oversight of the FEC. They are to report the funding raised for a candidate. There are different types of PACs. Some are associated with particular labor unions, corporations, or trade organizations. Other PACs are not associated with a business and are called nonconnected PACs. 3. Super PACs Super PACs are more controversial and came about because of a suit by Citizens United against the FEC. Citizens United claimed that campaign finance restrictions limited the freedom of speech. As a result of the Supreme Court ruling in favor of Citizens United, the federal government cannot limit the fundraising activities of corporations, unions, or individuals for a particular candidate. Super PACs are independent expenditure-only committees and can raise as much money as they want to raise for a candidate but are not supposed to accept or raise money from international or foreign entities. Super PACs are still to register and report their fundraising results to the FEC. According to Thought.co, Super PACs spent millions in the first election in which they could function (2012) and have been reported to have spent $1.4 billion in the 2016 election.4. Dark Money Since the Citizens United ruling and the formation of Super PACs, there have also followed fundraising efforts by unidentified groups that are not registered as PACs or Super PACs. What Is Dark Money? Dark money are unknown sources of political funding and often involve nonprofit 501(c) groups or social organizations. They can spend an unlimited amount of money for a particular candidate, like Super PACs. However, they are not required to disclose any information to the FEC about their donations or campaign spending. This means that their source of funding is unknown. These groups could spend a great deal to influence elections and the public may be unaware of this fact.Funding by Sectors Data is also available that shows how different sectors and industries have contributed to political parties. Several groups contributed equally to both parties such as real estate, retired people, securities and investment, health professionals and finance. Other groups contributed more to one party than the other. For example, the education, environment, and law sectors primarily contributed to Democrats. Oil and gas, retail and insurance sectors contributed more to the Republican party. In early 2020 Dr. Jeremy Bennett, professor at The Citadel, realized "Facts are more important than ever and there is a lot of misinformation in the world being used to confuse people." To help with this issue he and Carlos Crameri, entrepreneur and CEO of Curious Check, created Facts Not Opinions where the data is not tampered with to reach a predetermined conclusion and does not have a political agenda. For more information on COVID-19, statistics, and analysis, visit: https://www.factsnotopinions.com. Contact Us to ask a question, provide feedback, or report a problem.207 BRIGHT LEAF LOOP Summerville SC 29486Dr. Jeremy Bennett 7702654506We provide the unfiltered data behind the biggest issues facing the United States and the world. The data is not tampered with to reach a predetermined conclusion and does not have a political agenda. The data is what it is.

09-29-2017 | IT, New Media & Software
Persistance Market Research
PACS Market Perceive Robust Expansion by 2026
Persistence Market Research delivers in-depth research on the global PACS market in its latest report titled “Global Market Study on Picture Archiving and Communication System (PACS): North America Likely to Remain Dominant Regional Market?”. According to the report, the global PACS market is projected to expand at a healthy CAGR of 6.2% during the forecast period in terms of revenue. A PACS is a fully integrated system which is used for
05-08-2017 | IT, New Media & Software
Persistence Market Research
PACS Market : Cloud-based PACS Will Cross US$ 1090.9 Mn by 2026
The global PACS market is segmented on the basis of deployment, components, business mode, end-use, and region. By deployment, PACS market is segmented into web-based PACS, cloud-based PACS and on-premise. Moreover, by components market is categorized into imaging modalities, secured network, and workstation and archives. On the basis of business mode, PACS market is fragmented into enterprise and departmental. Further PACS market end-users are hospitals, clinic imaging, dental practices, imaging
03-30-2017 | Health & Medicine
TMR
PACS and RIS Market: Cloud-based PACS and RIS to Witness Most Promising Growth
The picture archiving and communication system (PACS) and radiology information system (RIS) market is extremely consolidated, with the top five companies accounting for a share of over 61% in 2015. Transparency Market Research finds that GE Healthcare, Philips Healthcare, McKesson Corporation, Fujifilm Holdings Corporation, and Siemens Healthineers have significantly contributed to the global market over the years by providing an extra advantage to customers at a reasonable price. “In contrast to
01-12-2017 | Health & Medicine
TMR - Research Reports
PACS and RIS Market Opportunity Analysis; Adoption of Cloud based PACS by Health …
Driven by the technological advancements in the medical and healthcare industry encouraged by governments across the world, the global market for picture archiving and communication systems (PACS) and radiology information systems (RIS) are likely to witness substantial growth over the forthcoming years. According to Transparency Market Research (TMR), the total opportunity offered by the worldwide PACS and RIS market was US$2.2 bn in 2015. Expanding at a healthy CAGR of 7.0%
09-12-2013 | Health & Medicine
Paxeramed Corp.
Paxeramed launches Dental PACS solution
Paxeramed, an industry leading PACS /RIS developer has announced the launch of PaxeraDental, a comprehensive web-based PACS solution for acquiring dental images, diagnostics and reporting, The solutions features extensive hanging protocols including various defined FMX templates, Interactive Visual tools to customize FMX templates and extensive radiographic dental projection including Periapical, Bitewing, Occlusal, Panoramic and cephalometric, the solution features easy to use dental charts to setup periapical view and Supports both permanent
06-25-2009 | Health & Medicine
VEPRO AG
Bavarian Caregiver Innovates Processes with PACS from VEPRO AG
The Ottobeuren Regional Hospital is operated by the Unterallgäu county administration in Southern Germany, which has managed its community-owned hospitals in Mindelheim and Ottobeuren under the label "Unterallgäu-Kliniken" since the year 2000. The category II hospital has been an academic teaching organization of Erlangen-Nuremberg University since 2004, and in 2005 it joined the Allgäu Osteoporosis Center, in a network with the Bavarian Osteoporosis Center of the Ludwig Maximilians University Munich-Grosshadern. Furthermore,
Comments about openPR
OpenPR is clearly structured and remains true to its principle of confining itself to the essential parts. OpenPR has proven to be a very good and reliable partner to our media agency: Within the shortest time the releases are online and go down well with the media representatives. The success of OpenPR is reflected in the steadily increasing number of press releases. It is good that OpenPR exists!
Ursula Koslik, Director Marketing & PR, F+W Hamburg